Channeling the ’40s with a half-moon manicure

If I do say so myself, I’m terrifically talented at wasting time. And so I recently whiled away an hour or three on a half-moon manicure, a ’40s look that has become popular again. The “half-moon” at the base of the nail is left plain or painted in a color that contrasts with the rest of the nail. I decided to give it a whirl after admiring it on Dita Von Teese and reading a how-to by Beth Shapouri at Glamour. 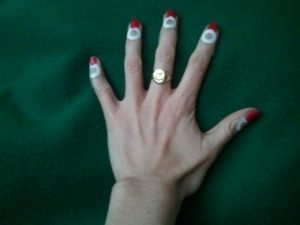 Beth came up with the nifty idea of using reinforcement labels as stencils for the half-moons. (The labels are little round white stickers used to keep papers in those ancient devices called three-ring binders. You can buy them at office-supply stores.)

I started with two coats of clear base, let it dry well, then placed the labels and painted on Revlon’s Frankly Scarlet (745), $5 at drug stores. This technique is a good start, but it does take some experimentation and practice to perfect the size of the half-moons. (My nails are a tad stubby now so I wanted small-ish moons, proportionate to shorter nails.)

The lower you place the label, the smaller and more elongated the half-moon. A snag I had is that the sides of the label don’t stick especially well and they really need to lay flat so I added a bit of tape to secure them. After the red dried and I removed the labels, I still had to “tweak” (ie, a Q-tip dipped in remover and a little freehand filling in with the red polish). This would be especially problematic had I gone two-tone (a metallic or neutral instead of a clear base) as I had hoped to do with my MAC 5 Naughty Little Vices Nail Lacquer. But I decided to keep it simple until I got the hang of it. 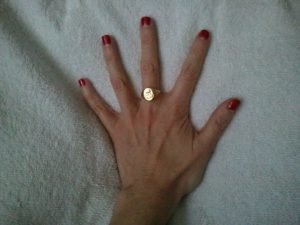 Still, after some trial and error, and a clear top coat, my nails looked pretty good. The bottom line is if you like fussing with beauty projects, creating this retro look is a fun challenge, especially if you’re bundled up inside on a snowy or rainy day. But, if you’re an impatient painter, it’s best left to a pro. Either way, it’s definitely a nice noir twist on a manicure and Frankly Scarlet is ideal for New Year’s Eve. Now if I can just figure out, a la the WW2-era, how to paint “silk stockings” on my gams and draw fake seams on the backs of my knees. 😉

My quest for the perfect eyeliner: Part Four

Paris on the run: ‘Zazie dans le Metro’ is an exhilarating, frenetic adventure