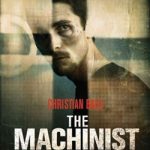 The first thing you might notice about Christian Bale in this movie is that he’s a tad skinny. Well, more than a tad. That’s just the beginning of the weirdness by director Brad Anderson, but it’s brilliant weirdness in a story of a factory worker who seems to be terrorized by hellish nightmares, except that he’s an insomniac. Jennifer Jason Leigh, Aitana Sánchez-Gijón and John Sharian keep him company through the long, creepy nights.

Almost time to tweet about the Golden Globes Christian Bale dazzles in the mesmerizing, surreal world of ‘The Machinist’