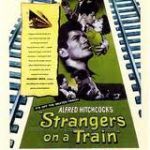 My quest for the perfect eyeliner: Part One ‘Strangers on a Train’ brings out the bad in the best of us