Free stuff from FNB: Win ‘The Film That Changed My Life’

Winners of the April giveaway have been selected and contacted. One will receive “Blow Out,” Brian DePalma’s 1981 neo-noir thriller starring John Travolta. The movie was recently rereleased by Criterion. The other winner will receive a copy of “The Maybelline Story and the Spirited Family Dynasty Behind It,” a book by Sharrie Williams. 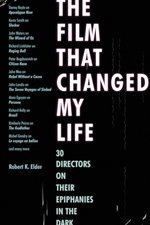 For the May giveaway, I am giving away a copy of my friend and former colleague Robert K. Elder’s book: “The Film That Changed My Life: 30 Directors on Their Epiphanies in the Dark.” Directors include: Danny Boyle, Peter Bogdanovich, John Dahl, Henry Jaglom, Guy Maddin, Atom Egoyan, Richard Linklater, John Woo, John Landis, Neil LaBute and John Waters.

(Meanwhile, Rob has a new book out called, “It Was Over When: Tales of Romantic Dead Ends,” based on stories compiled via his web site of the same name.)

To enter the May giveaway, just leave a comment on any FNB post through May 31. The winner will be randomly selected at the end of the month and announced in early June. Include your email address in your comment so that I can notify you if you win. Your email will not be shared.

My quest for the perfect eyeliner: Part Four

Paris on the run: ‘Zazie dans le Metro’ is an exhilarating, frenetic adventure