FNB: On your latest EP “Love and the Apocalypse” there is a song called “Los Angeles.” Not being natives, what surprised you most about this stalwart of noir cities and what do you think is the biggest misconception about the city?
JB: The biggest misconception is that everyone is shallow and back-stabbing here. It’s simply not true. Sure, there are jackasses here, but they are everywhere. Every place has ’em. The population is so large in LA that one could think there are more of the bad guys here, but that’s a ratio thing.
x
There are incredible people here. We’ve made some of our best friends in Los Angeles. Of course, if you come here expecting ugliness, well, you’ve certainly increased your chances of having an awful time in this town. Negativity is a magnet for more negativity.
x
The other thing is, LA is strangely homogenized, in a good way. It’s extremely multicultural, but not incredibly diverse. It’s hard to explain, it’s like everyone is just … an Angelino. We love that.
x 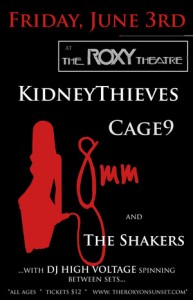 FNB: You were both living in New Orleans when you got together. How did you meet?
JB: We were in Jimmy’s in New Orleans. Sean was mixing front of house for Nine Inch Nails. It was a surprise show in a small club so it was packed to the rafters and complete chaos. We actually just saw each other that night. We didn’t exchange anything more than looks, really. We tried, but between the show and the crowd, we kept getting pushed apart. At the end of the night we saw each other across the room and kind of shrugged, an “oh well” and that was it. Not a word.
x
Two nights later, I was walking down Decatur Street with my friend, Linda (who tends to just chatter away … something against quiet, I think) and suddenly her voice was gone … I turn to see where she’s gone to and she’s stopped in front of Molly’s at the Market talking to Sean. He gives a sideways glance, and I get an idea of why he stopped her. I walk up and he says, “Hey, my friends and I were gonna head over to the R Bar. Wanna come with us?” Linda and I say, yes. Sean runs back into Molly’s and informs his friends that they’re all going to R Bar (on Royal).
x
They grab their drinks (because in New Orleans, we’re civilized enough to let you keep the drink you paid for, just put it in a Dixie cup and walk). Sean and I talked the whole way (he says he picked the R Bar because it was far enough for us to talk before going into somewhere noisy) … well, that was it. I dropped everyone off at about 8 a.m., and Sean and I have spoken every day since.
x
FNB: What is the hardest part of a live performance?
JB: Load in and load out. The rest is fun!
x
FNB: Any favorite places to shop for retro/vintage looks?
JB: Definitely. Stop Staring! clothing line by Alicia Estrada. The line is all inspired by golden-era Hollywood, subtly blending elements of ’40s, ’50s and early ’60s. Most of what I wear on stage is Stop Staring!
x
Brian De Palma’s ‘Blow Out’ sometimes makes us roll our eyes and sometimes holds us spellbound Honey, your June horoscope is here …

Rouge tins and compacts and powder, oh my!

Vintage cosmetics collector shares a few of her 500 finds