In “The Guard,” Brendan Gleeson is a small-town Irish cop and Don Cheadle a by-the-book FBI agent who comes to the Emerald Isle to bust an international drug-smuggling gang. The two clash at first, then become unlikely allies, then friends, as they get closer to core of the criminal operation.

On the plus side, this black comedy, with a healthy dose of murder, blackmail and corruption, is good for some dark dry laughs, especially from the formidable and funny Gleeson. He knocks back the lines as easily as his character downs a pint. Writer/director John Michael McDonagh is the brother of Martin McDonagh (writer/director of 2008’s “In Bruges”) and, like his brother, he relishes irreverent sarcasm. On the minus side, though, “The Guard” is superficial and derivative; you have seen this movie before.

But if it’s a bit of entertainment you’re after, “The Guard” is your man.

According to writer/director Jacob Tierney, “Good Neighbors,” based on a novel by Chrystine Brouillet, isn’t so much a whodunit as it is a satirical movie about people uncovering information and then having to decide what to do with it.

The people in this case are residents of a Montreal apartment building in 1995, three young tenants who become friends: charming, sly Spencer (Scott Speedman), brusque and to-the-point cat lover Louise (Emily Hampshire) and cute but geeky Victor (Jay Baruchel). The above-mentioned information relates to the rape and murder of several young women around the city. Safe at home in a cozy apartment? Not so much, especially since the members of the friendly trio turn out to be capable of shocking, searing violence.

There are more holes than surprises in this movie, the compositions are a little dull looking and it’s not particularly suspenseful until the last reel. That said, the last reel delivers some full-on tension, the actors are interesting to watch, especially Hampshire, and the writing’s not bad. Also, cats figure prominently in the plot – reason enough to see it in my book. 😉

French police thrillers, especially the classics by Clouzot, Chabrol and Melville, used to be a bit more plausible and psychologically acute than their American counterparts – explosive action shoot-’em-ups that have mostly tried to knock us on our asses. Not so these days. The French cops-and-robbers hit movie “Point Blank” out-Yanks the Yanks by knocking us on our derrieres in the first few minutes — and then keeps it up, racing like hell on wheels for the next 80.

That’s the good news: It’s an exciting movie. The bad news is that, like many of its U.S. counterparts, it doesn’t make a hell of a lot of sense. The other good news is that writer/director Fred Cavayé’s movie is so well-gunned and goes by so damned fast, you barely notice the holes as you bounce over them.

The plot, jam-packed into the movie’s screamingly fast running time, has to do with a hit man named Hugo Sartet (Roschdy Zem, the somberly magnetic actor of “Days of Glory”) who’s been betrayed and nearly killed. He winds up in the hospital in the custody of the police and the care of a low-key male nurse, Samuel Pierret (the amiable and wonderfully nervous Gilles Lellouche).

Samuel saves Hugo from more would-be assassins and then, to his horror, finds himself trapped between the crooks and the cops – and the crooks who are cops (quite a lot of them, as it turns out). Under the evil command of the Teutonic-looking Commandant Patrick Werner (Gerard Lanvin), who’s actually conducting the investigation of his own crimes, those rogue police start chasing Hugo and Samuel all around Paris.

And, for insurance, they kidnap Samuel‘s beautiful wife Nadia (Elena Anaya), who’s eight months pregnant — threatening her death unless Samuel helps them. Soon Samuel and Hugo have become friends, of a sort, and a large section of Paris has become a bloody battleground.

I told you it didn’t make much sense. And, as I said, it doesn’t really matter. Cavayé, an ex-fashion photographer with a good eye and a blistering sense of pace, also made the big French neo-noir hit “Pour Elle,” which was translated and Americanized into the savagely improbable Russell Crowe thriller “The Next Three Days.” (Hollywood copied it so fast that Cavayé’s French original wasn’t imported and may still pop up here.)

Like Luc Besson and his disciples, Cavayé can do certain high-tech American tricks better than a lot of Americans. How does he get any suspension of disbelief, besides pure speed and kinetic rush? The leads, Zem, Lellouche and Anaya, are all excellent actors (Zem has a great glare) and they bring emotional conviction to a story you can barely believe for a minute.

But whether you call it “Point Blank” or “A Bout Portant” or “The French Reconnection” or “Paris Goes Kaboom,” this is still one totally exciting if often wildly preposterous movie.

With its engrossing story, gorgeous cinematography and riveting performances, ‘The Conformist’ still compels 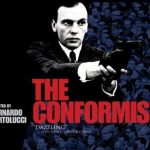 Is Bernardo Bertolucci’s “The Conformist” – an art film classic regarded by many cinematographers as the most beautifully photographed movie of its era – also a neo-noir?

Well, it’s a movie, set in the 1930s, about those old noir standbys: romance, sex, murder, betrayal, guilt and political/police corruption. Adapted from the famous novel by Alberto Moravia, it has a psychologically divided and tormented central character, Marcello Clerici (played by Jean-Louis Trintignant of “Z” and “A Man and a Woman”), who is racked by Freudian desires and guilty secrets. The opaque-faced Marcello has homosexual leanings, which he tries to wipe out by marrying and becoming a good reliable government man. In 1930s Italy, this means being a good fascist.

Marcello is also involved in a messy triangle with his lovely, naive wife Giulia (Stefania Sandrelli) and with the incredibly beautiful bisexual Anna Quadri (Dominique Sanda). In 1970, because of this movie, the ravishing blonde Sanda was often described as the most beautiful actress in movies. Sanda was also Bertolucci’s first choice to be Marlon Brando’s co-star in “Last Tango in Paris.” (She chose motherhood instead.)

“The Conformist,” though, made her a movie immortal. Sanda’s feverish onscreen tango with Sandrelli against an iridescent, gorgeously colored background, while Marcello watches, is one of the most justly famous erotic/musical set-pieces in all of cinema.

Bertolucci later went on to make celebrated and even notorious classics like “The Last Emperor” and “Last Tango,” but many aficionados still prefer “The Conformist” for its engrossing story, the savvy political background, the absolutely gorgeous Storaro cinematography (the color equivalent of a great noir black-and-white), and for the riveting performances by Sanda, Trintignant, Sandrelli, Pierre Clementi, Yvonne Sanson and the others. END_OF_DOCUMENT_TOKEN_TO_BE_REPLACED

‘Lady from Shanghai’ is richly surreal, haunting in its intensity

The Lady from Shanghai/1948/Columbia Pictures/87 min.

“Citizen Kane” is hallowed cinematic ground, I know, but my favorite Orson Welles film is “The Lady from Shanghai” (1948), which he wrote, produced, directed and starred in, playing opposite his real-life wife Rita Hayworth, one of the most popular entertainers of the 1940s.

In “The Lady from Shanghai” Welles plays Michael O’Hara, an Irish merchant seaman, in between ships in New York. By chance, or so he thinks, he meets the wily blonde operator Elsa Bannister (Hayworth) and saves her from being mugged in the park.

Elsa invites Michael to join her as she sets sail for Acapulco. The boat belongs to her husband, a wizened, creepy criminal lawyer named Arthur Bannister (Everett Sloane), and he’ll be on the trip too. So will his partner, the moon-faced and sinister George Grisby (Glenn Anders). O’Hara agrees regardless. “Once I’d seen her,” he says, “I wasn’t in the right frame of mind.”

On their voyage (the yacht belonged to Errol Flynn), Elsa and Michael flirt every chance they get; Arthur gets touchy and calls her “Lovah,” in a most unloving way; Grisby is generally unpleasant. The tension builds, then breaks when they reach San Francisco. But not for long.

Grisby has a plan to cash in on an insurance policy by faking his own murder and bribes Michael to help him. Need I say the plan doesn’t quite work out as they’d hoped? This is film noir, you know.

“The Lady from Shanghai” is richly surreal and haunting in its intensity. Welles and cinematographer Charles Lawton Jr. use staggering angles and startling black shadow almost to the point of abstraction. Two of the most famous sequences are the aquarium and the funhouse hall of mirrors at the end. Of the latter, Time Out notes that “it stands as a brilliant expressionist metaphor for sexual unease and its accompanying loss of identity.”

The script, based on the Sherwood King novel “If I Die Before I Wake,” crackles with noir attitude (“Everybody’s somebody’s fool,” says O’Hara). Hayworth, the perfect femme fatale, looks contemporary and sexy whether in her chic nautical garb or the filigree hat she wears in the courtroom. END_OF_DOCUMENT_TOKEN_TO_BE_REPLACED

‘The Lady from Shanghai’ quick hit

The Lady from Shanghai/1948/Columbia Pictures/87 min.

Irish sailor Michael O’Hara (Orson Welles) knows from the start that it’s probably not going to work out well when Elsa Bannister (Rita Hayworth, Welles’ real-life wife) invites him to join her on a sailing trip with her husband and his business partner. “When I start out to make a fool of myself, there’s very little can stop me,” says O’Hara. The plot is downright acrobatic; the visuals are dazzling. Welles directed, wrote and produced.