Leap into spring with London Blooms from Jo Malone

I’ve always loved the wild beauty of gardens across the pond and these scents capture that sense of daring and disdain for convention. Each one is an interesting pairing, but my favorite is White Lilac & Rhubarb, which also features rose and heliotrope. Iris & Lady Moore is spicy and powdery. Peony & Moss contrasts the “dainty and the dirty.”

Note: I did not receive product or compensation from Jo Malone for this post.

So it looks like I lied re: my fave Oscars dress. My No. 1 is now the vintage-inspired gown by Jenny Packham that Dita Von Teese wore to the Elton John AIDS Foundation viewing party.

“But well 5 Oscars … I just can’t help some chauvinistic boasting tonight! A special mention to the handsome Jean Dujardin who is one of the most suave and entertaining French actor at the moment.”

Read more about France’s wins for “The Artist” from Reuters and the New York Times.

On the radar: ‘The Artist’ and inspiration; ‘Chinatown’ kicks off series; long gone Hollywood; Crawford goes a little crazy

Now that “The Artist” won the Oscar for Best Picture, I’m hoping more people will feel inspired to explore black and white movies, especially Billy Wilder b&w flicks. (“The Artist” director Michel Hazanavicius thanked Wilder three times last night!) Overall, I enjoyed the show, though there were few surprises. Billy Crystal is always good and my favorite look of the night was Gwyneth Paltrow in the Tom Ford cape gown.
Meanwhile, this looks set to be a busy week for cinephiles. Starting tonight: Unique LA presents a monthly movie series at the Echoplex. First up is “Chinatown.” Doors open at 7 p.m. Movies start at 8 p.m. Tickets are $10 pre-sale online only.
#
At 7 p.m. this Wednesday (Feb. 29) at Larry Edmunds Bookshop in Hollywood, author Gregory Paul Williams will sign the paperback edition of his book “The Story of Hollywood.” He’ll also present a program on long gone Hollywood, featuring favorite haunts and spots of legend and lore.
#
At 7:30 p.m. this Wednesday (Feb. 29), the Million Dollar Theater and the UCLA Film & Television Archive co-present a double feature from director William Castle: 1964’s “Strait-Jacket,” starring Joan Crawford as a hatchet-wielding maniac released from prison after serving time for killing her husband, and “Homicidal” (1961) about a small-town killing and its effects on members of a family vying for an inheritance.
#
Gwyneth Paltrow photo: Heather Ikei / © A.M.P.A.S.
#

A quintessential ’40s woman who may have dubbed Oscar

Herrick served as executive director of the Academy from 1945 to 1971. It was she who negotiated the Academy’s first TV broadcast (1953) and transformed the Oscars ceremony into a major televised event.

How did she do it? By acquiring expertise (a University of Washington library degree and experience as a head librarian) and following her heart – literally. She married Donald Gledhill, who eventually became executive secretary of the Academy, and moved to Hollywood to join him. Starting as a volunteer, she became the Academy’s librarian in 1936.

She took on her husband’s duties when he left for military service in World War II. After the couple divorced in 1945, the Academy Board of Governors offered her the executive position. (In 1946, she married Philip A. Herrick. They divorced in 1951, but she continued to use his name professionally.)

Margaret Herrick laid the foundation for what is now considered to be one of the world’s finest film-related libraries. Following her retirement in 1971, the Academy library was renamed in her honor. She died on June 20, 1976.

And, of the several stories about how the name Oscar came into being, a leading contender is that in the early 1930s Herrick saw the statuette and said it looked like her Uncle Oscar. Whether Herrick or someone else (Bette Davis perhaps?) thought of the name, the Academy officially adopted the moniker in 1939.

Photos and source info from www.oscars.org

Warning: ‘Thin Ice’ has more than a few cracks 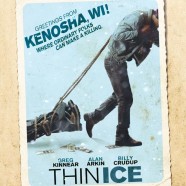 Small towns where not much happens, 20-below weather, dive bars and cheese curds. It’s all good fodder for quirky, memorable Midwestern noir. Or it could be. But unfortunately “Thin Ice” lets its promise and potential melt away.

There are some things to like – a few funny moments, it looks good and it’s quite well cast. Greg Kinnear plays a sleazy, smiling insurance salesman named Mickey V. Prohaska. His license plate is MVP2 because someone already had MVP. And he’s desperate for cash. He sees a chance to secure some money after he discovers that a new client (Alan Arkin) has a valuable violin tucked away in his farmhouse, amid the knick-knacks and fading wallpaper.

But when Mickey tries to grab the violin, his plan goes disastrously awry thanks to a local psycho (Billy Crudup). Instead of a clean swipe, there’s a dead body to dispose of and complications ensue. David Harbour shines as Mickey’s earnest employee. So does Lea Thompson as Mickey’s estranged wife and Bob Balaban as the violin appraiser.

“Thin Ice” is watchable, parts are enjoyable, but the story limps, then stumbles to a ridiculous ending. There’s no command of the material as it stands. I say as it stands because writer/director Jill Sprecher, a Wisconsin native who wrote the script with her sister Karen Sprecher, reportedly tried to remove her name from the film after the distributor recut it without their involvement.

I wish I could see Sprecher’s original movie and, as for “Thin Ice,” I wish I’d stayed home and watched “Fargo” by the Coen brothers one more time instead.