This month’s reader giveaway is the Criterion rerelease of “The 39 Steps.” Michael Wilmington reviews.

Movie thrillers come and go, but, after more than three quarters of a century, Alfred Hitchcock’s “The 39 Steps” still reigns supreme. And not only for the breathless excitement of the story, the seamless construction, the chilling, beautifully realized atmosphere and the startling stream of plot twists. Nor for its historical importance, though almost every chase and spy thriller since 1935 copies it.

Nor for its actors – despite a truly excellent ensemble: Madeleine Carroll as Pamela, the cool Hitchcockian blond; Lucie Mannheim as a seductive lady of mystery; Godfrey Tearle as an urbane master criminal; Peggy Ashcroft and John Laurie as a moody farming couple on the barren Scottish moors; Wylie Watson as that Proustian prodigy, Mr. Memory; and, at the center of the action, Robert Donat as the endlessly suave and resilient Richard Hannay, a fugitive who keeps his quiet wit and brilliant resources, no matter what dangerous curve Fate (and Hitchcock) manage to throw him.

More than anything else, the film keeps its preeminent place because this is the movie in which Hitchcock became “Hitchcock,” earning the reputation he never relinquished as “The Master of Suspense.”

Well into the 1960s, “The 39 Steps” was still commonly called his best movie. André Bazin: “It remains indubitably his masterpiece and a model for detective comedies.” And Pauline Kael: “This suave, amusing spy melodrama is . . . charged with wit; it’s one of the three or four best things Hitchcock ever did.”

Hitchcock had major successes before, but “The 39 Steps” was the first with major international impact. No previous Hitchcock so gripped, amused or thrilled audiences from Europe to America, Australia to Asia. More than any of his previous 19 British films, or the five that followed, “The 39 Steps” was responsible for his emigration to America as a first-rank filmmaker.

The Hitchcock of 1935 was no neophyte. He was a director of a decade’s experience, the master of his craft, adapting a novel by one of his favorite authors, John Buchan.

And Hitchcock was telling a story of strong personal appeal – so strong that he used bits and pieces of it throughout his career.

In discussing the film with François Truffaut, Hitchcock said: “What I like best about ‘The 39 Steps’ are the swift transitions.” The lightning transitions and ingenious editing keep the film fresh and bewitching. The landlady’s scream, on discovering a corpse in Hannay’s flat, becomes the shriek of the train whistle as Hannay escapes. We race at breakneck speed from London’s Portland Place to the forbidding Scottish moors, under eternal, glowering skies, and back to London, where another performance at the Palladium completes the circle.

But the swift transitions are more than geographic. Hitchcock, as he would many times again, offers a dizzying set of moral alterations: a world where love and death, fear and desire are in constant, nerve-wracking and sometimes acidly humorous juxtaposition.

Hannay begins his perilous odyssey with what seems an innocuous peccadillo: meeting and taking home a woman who calls herself “Mrs. Smith.”

“Romance” leads to danger. The woman is not a pickup; she is a hunted spy, fearful for her life. The next morning, after she is murdered by the spies on her trail, Hannay escapes from his London flat by pretending to a milkman that he is a philanderer ducking a vengeful husband – something he nearly becomes when, still dodging the police, he stays a night with a dour Scottish farmer and his much younger wife.

Earlier, fleeing the London murder scene by train, he tries to elude the police by embracing a total stranger (to her fury).

He winds up manacled to that same stranger, Pamela, taking refuge at an inn where the beaming landlady, impressed at their constant togetherness, exclaims: “They’re so terribly in love with each other!” Love and death, sex and slaughter – these are the poles of the universe so playfully presented here: reversing and replacing each other, becoming a shadowy, disturbing double mirror.

“The 39 Steps” is that rarity: a cinematic masterpiece that has stood the test of time, a great work that is also a great crowd-pleaser. Hitchcock liked to remark, with what may have been a sly touch of self-deprecation: “Most films are slices of life. Mine are slices of cake.” This particular cake is one of his most luscious: dark, savory, a richly compulsive treat.

A b&w movie inspired Pulitzer Prize-winning playwright Lynn Nottage to write her latest work, “By the Way, Meet Vera Stark.” Making its West Coast premiere at the Geffen Playhouse in Westwood, the play runs through Oct. 28.

Says Nottage: “I was watching television late one night when I came across a 1930s film called ‘Babyface,’ which featured a very charming and talented young African-American actress named Theresa Harris. When the film ended, I immediately began roaming the Internet in search of more information. …

“I was struck by my own ignorance, not only about Theresa’s prodigious and eclectic career, but also about a whole generation of African-American screen actors who plied their trade in relative obscurity. My unmitigated curiosity … led me to the actress Vera Stark. Indeed, ‘By the Way, Meet Vera Stark’ pays homage to Theresa Harris and other African-American performers who for decades were relegated to the margins of the frame.”

I saw the play on opening night. Though I thought it faltered a bit in the second act, “Vera Stark” is insightful, witty and visually delightful. Sanaa Lathan leads the excellent cast. You can read the LA Times review here. 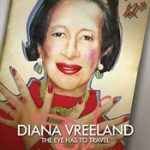 And a must-see movie: “Diana Vreeland: The Eye Has to Travel.” I saw this last year at the Chicago Film Festival and Vreeland is a fascinating subject, no matter how you feel about fashion.

I will be posting a longer piece based on my interview with Lisa Immordino Vreeland (Diana’s granddaughter-in-law) but wanted to at least note that it is open in some U.S. cities with more to follow. Why don’t you?

Hitchcock blends noir, Americana in ‘Shadow of a Doubt’

A guide to classic film noir and neo-noir on cable TV. All the movies below are from the current schedule of Turner Classic Movies (TCM), which broadcasts them uncut and uninterrupted. The times are Eastern Standard and (Pacific Standard).

A bright and beautiful small town girl named Charlotte “Charlie” Newton (Teresa Wright) is bored, bored with her well-ordered home in her pretty Norman Rockwellish little city of Santa Rosa, Calif., – where trees line the sunlit streets, everyone goes to church on Sunday, and lots of them read murder mysteries at night. Charlie has more exotic dreams. She adores her globe-trotting, urbane Uncle Charlie Oakley (Joseph Cotten) – for whom she was nicknamed – and is deliriously happy when he shows up in Santa Rosa for a visit.

But Uncle Charlie has some secrets that no one in his circle would guess – not Uncle Charlie’s adoring sister (Patricia Collinge), nor his good-hearted brother-in-law (Henry Travers), nor their mystery-loving neighbor Herbie (Hume Cronyn), nor Charlie herself. Uncle Charlie, who conceals a darker personality and profession beneath his charming persona, is on the run, pursued by a dogged police detective (Macdonald Carey), who suspects him of being a notorious serial killer who seduces rich old widows and kills them for their money. As handsome, cold-blooded Uncle Charlie, Cotten, who also called “Shadow” his personal favorite film, is, with Robert Walker and Anthony Perkins, one of the three great Hitchcockian psychopaths.

“Shadow of a Doubt,” released in 1943, was Hitchcock’s sixth American movie and the one he often described as his favorite. As he explained to François Truffaut, this was because he felt that his critical enemies, the “plausibles,” could have nothing to quibble about with “Shadow.” It was written by two superb chroniclers of Americana, Thornton Wilder (“Our Town”) and Sally Benson (“Meet Me in St. Louis”), along with Hitch’s constant collaborator, wife Alma Reville. The result is one of the supreme examples of Hitchcockian counterpoint: with a sunny, beguiling background against which dark terror erupts. 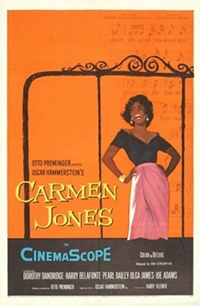 8 p.m. (5 p.m.): “The Fallen Idol” (1948, Carol Reed). In 1948, a year before they made the nonpareil thriller “The Third Man,” director Carol Reed and screenwriter Graham Greene collaborated on another tilted-camera film-noir classic: this mesmerizing story of a little French boy (Bobby Henrey), a French diplomat’s son, who hero-worships the embassy butler (Ralph Richardson), but mistakenly comes to believe his idol has murdered his wife, and keeps unintentionally incriminating him. With Michele Morgan, Jack Hawkins and Bernard Lee – and stunning cinematography by Georges Perinal.

12 p.m. (9 a.m.): “Carmen Jones” (1954, Otto Preminger). From Georges Bizet’s great, tuneful, massively popular opera, based on Prosper Merimee’s novel about a lusty cigarette girl and the soldier who is obsessed with her, unwisely: A compelling noir musical, with an African-American cast (headed by Dorothy Dandridge as femme fatale Carmen and Harry Belafonte as soldier Joe), lyrics and libretto by Oscar Hammerstein II, and direction by Otto Preminger. The rest of the cast includes Pearl Bailey, Diahann Carroll and Brock Peters. 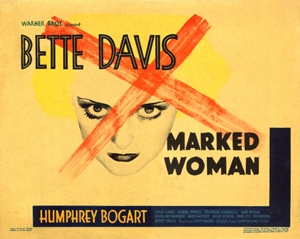 1:30 a.m. (10:30 p.m.): “Marked Woman” (1937, Lloyd Bacon). Bette Davis plays a feisty “hostess” and Humphrey Bogart plays a crusading D. A. Together with Bette’s pals, other “hostesses” (aka ladies of the evening), they go up against the mob, in this feminist pre-noir crime classic, co-scripted by Robert Rossen. Based on a famous real-life New York City prostitution case. The Bogart and Eduardo Ciannelli characters are modeled on Thomas Dewey and Lucky Luciano. With Lola Lane, Allen Jenkins and Mayo Methot (Mrs. Bogart). 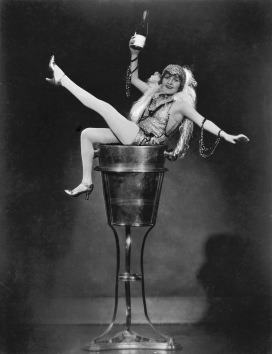 Alfred Hitchcock’s newly restored silent comedy classic, “Champagne,” will be streamed live at the British Film Institute and online at The Space on Thursday, Sept. 27, at 7:30 p.m. (GMT). You can watch a clip here.

“Champagne” (1928) is a Jazz Age comic parable. It tells the story of a spoiled rich girl (Betty Balfour) who leads a life of luxury on the profits from her father’s champagne business.

Suspecting that his daughter’s fiancé (Jean Bradin) is a gold-digger, Dad (Gordon Harker) tells Betty that the family fortune has been wiped out in the stock market. When the boyfriend leaves, the father thinks this proves his case.

The premiere will be accompanied by a new score performed live by award-winning composer, producer and performer Mira Calix.

Also, before Thursday’s live stream, you can watch four Hitch documentaries on The Space. (“Champagne” will not be available on-demand after the event.)

“He was LA’s top mobster for a generation. You don’t get more outrageous and brazen than Mickey Cohen,” says author Tere Tereba. “He was the ultimate anti-hero because he did what he wanted to do. He went against the cops, he fought city hall. He did all the things you’re not supposed to do and everybody’s afraid to do. Even his showy style of doing business. He dressed the way he wanted to, in a semi-Zoot suit. He knew what he liked and he followed it.”

Earlier this year, Tereba published the acclaimed book “Mickey Cohen: The Life and Crimes of L.A.’s Notorious Mobster” outlining the history of the man and the city, from Prohibition to the mid ’70s. This Friday, Sept. 28, she welcomes a surprise special guest to her reading and signing at Book Soup on Sunset Boulevard, which was Cohen’s turf in his heyday.

Oh, and drinks will be served!  Zoot suits optional.