The Noir File: Dark treats from Preminger, Dassin and Lang 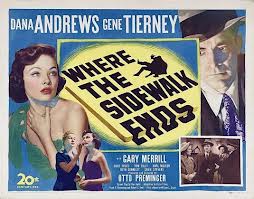 Scripted by Ben Hecht from William Stuart’s book “Night Cry.” If you want to know what film noir is all about, check this one out.

4:30 a.m. (1:30 a.m.): “Night and the City” (1950, Jules Dassin). In shadow-drenched, dangerous London, crooked fight promoter Harry Fabian (Richard Widmark) double-crosses everyone he encounters as he tries to outrace the night. The night is faster. This is a top film noir, a masterpiece of style and suspense. From Gerald Kersh’s novel; with Gene Tierney, Herbert Lom, Francis L. Sullivan and Googie Withers.

8:15 a.m. (5:15 a.m.): “Bunny Lake is Missing” (1965, Otto Preminger). Bunny Lake is an American child kidnapped in London, Carol Lynley her terrified mother, Keir Dullea her concerned uncle, Anna Massey her harassed teacher, Noel Coward her sleazy landlord, and Laurence Olivier the brainy police detective trying to put the pieces of the puzzle together. The most important of those pieces: Was Bunny ever really there at all? A neglected gem; based on Evelyn Piper’s novel.

4 a.m. (1 a.m.): “Ministry of Fear” (1944, Fritz Lang). Ray Milland, just released from a British mental institution, wins the wrong cake at a charity raffle and becomes ensnared in a nightmarish web of espionage and murder. The source is one of novelist Graham Greene’s “entertainments.” Co-starring Marjorie Reynolds and Dan Duryea.

I hope your holidays are joyous and that Santa Baby showered you with lovely gifts and rapt attention. Here are a few film favorites of the season. Enjoy!

And, in case you missed it earlier this month, FNB wrote about “Lady in the Lake,” an experimental film noir with a Christmas setting.

You can find retro cocktail recipes (with alcohol) here. 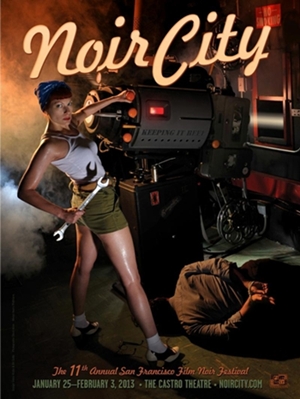 This festival kicks off with a tribute to actress Peggy Cummins, legendary for her ferocious performance in “Gun Crazy” (1950, Joseph H. Lewis). As always, Noir City will feature classics and rarities. Opening weekend will feature the world premiere of two of the FNF’s latest film restoration projects: “Try and Get Me!” (1950, Cy Endfield) and “Repeat Performance” (1947, Alfred L. Werker).

The San Francisco festival runs Jan. 25-Feb. 3, 2013. The festival (with variations on the program) travels to several other cities throughout the year. On Thursday, Jan. 17, Eddie Muller and Robert Osborne will co-host “A Night in Noir City” on Turner Classic Movies. The five-film program of rare film noir includes two of the FNF’s restorations, “Cry Danger” (1951, Robert Parrish) and “The Prowler” (1951, Joseph Losey).

The Noir File: All noir, all day, with Stanwyck and Mitchum

The Noir File is FNB’s guide to classic film noir, neo-noir and pre-noir on cable TV. All movies below are from the schedule of Turner Classic Movies (TCM), which broadcasts them uncut and uninterrupted. The times are Eastern Standard and (Pacific Standard). This month, TCM pays tribute to one of the great noir dames, Barbara “Missy” Stanwyck. All the Stanwyck film noirs are on Wednesday (Film Noir Day) and Thursday. Robert Mitchum gets a noir tribute on Wednesday too. 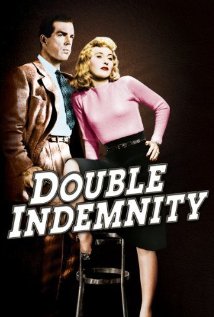 Sometime before dawn. A dying man, the bullet still in his gut, staggers into his shadowy insurance company office, slumps in a chair, picks up the Dictaphone receiver, and begins to talk. It’s a confession of murder, probably the greatest confession in the history of film noir. The dying man is Walter Neff (Fred MacMurray), a bright, handsome, good-natured insurance salesman who’s sold one policy too many.

He sold it to the husband of Phyllis Dietrichson (Barbara Stanwyck) – the sexiest, blackest hearted dame who ever lit up a cigarette, slipped on (or off) an ankle bracelet, or took out a double indemnity insurance policy on her sap of a husband, prepared by her sap of a salesman/lover. The confession is to his best friend, “hot potato” claims investigator Barton Keyes (Edward G. Robinson). That hurts as much as the bullet. But it doesn’t really matter. There’s not much time left to tell the story. And it’s a hell of a story…

“Double Indemnity” – directed by Billy Wilder, scripted by Wilder and Raymond Chandler from James M. Cain’s great, knife-sharp novel, photographed by John Seitz, with music by Miklos Rozsa – is the pinnacle of film noir. There simply is no better, deeper, darker noir than this one.

Note: For entries that don’t have descriptions, use the search bar on the upper-right side of this page to find previous reviews.

I recently wrote about 1947’s “Lady in the Lake,” a Raymond Chandler/Philip Marlowe tale, starring and directed by Robert Montgomery. Its chief claim to fame is the experimental subjective camera – the story is told entirely from Marlowe’s point of view.

In that review, I noted that “Dark Passage,” starring Humphrey Bogart and Lauren Bacall, also from 1947, uses a subjective camera as well, though just for the first half-hour of the movie. The limited use of the technique in “Dark Passage” pays off much better than the full-on treatment in “Lady.” Though “Dark Passage” wasn’t a huge hit in its day – audiences weren’t crazy about being deprived of Bogart – it’s a film noir treasure that rarely gets its due.

Admittedly, the plausibility police would have a field day with this one. From the moment we meet Bogart as escaped San Quentin prisoner Vincent Parry and Bacall as Irene Jansen, his mysterious helper/wealthy benefactor, the phrase “never gonna happen” pops into your mind and lingers as the rather bizarre plot unfolds. This is not a realistic movie. So sue director/writer Delmer Daves and novelist David Goodis, who provided the source material.

I don’t think the filmmakers’ aim was to tell a story that’s relatable in a literal sense. The idea was to explore ideas about trust, identity, revenge, isolation and paranoia in the shell of an entertaining thriller that’s also infused with the famous Bogie-Bacall chemistry. At the same time, the sometimes-unwieldy narrative has depth and intelligence – it’s not merely a slapdash concoction of the outlandish and absurd. Goodis was a particularly pessimistic writer and a harsh social critic.

Here Bacall’s Irene is calling the shots, outwitting the cops and doling out shrewd suggestions to Vincent in her singular husky voice. Irene is the only person who believes in Vincent’s innocence –that he was wrongly convicted of murdering his wife. Dressed to elegant perfection in every scene, she spurs Vincent to spruce up his wardrobe as well. But Vincent needs more than a fashion overhaul if he is to avoid recapture.

Besides the leads, “Dark Passage” has a tremendous cast – Bruce Bennett shines as Irene’s solid, decent friend and the inimitable Agnes Moorehead sparkles as Madge, the ultimate conniving shrew, with a penchant for animal prints, no less. Houseley Stevenson is unforgettable as the unsavory but highly skilled Dr. Walter Coley. The creepy doctor proves pivotal in Vincent’s quest to remake himself. Even the small parts –a small-time crook, a chatty cabbie and a diner waiter (played by Clifton Young, Tom D’Andrea and Tom Fadden) – are great fun to watch.

The Franz Waxman score, along with San Francisco locations and slick cinematography by Sid Hickox, result in a noir rapture – including a nightmare sequence that is still unsettling 65 years later. Every detail of this strange little work, though not a great film, feels intriguing, satisfying and true to its own (slightly warped) logic. 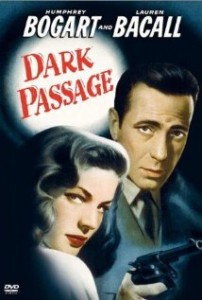 The sometimes-neglected “Dark Passage,” by writer/director Delmer Daves, has ingredients that result in a noir rapture: Humphrey Bogart and Lauren Bacall leading a terrific cast (Agnes Moorehead shines as a shrew with a penchant for animal prints), a bizarre story, Franz Waxman’s score, San Francisco locations and slick cinematography by Sid Hickox – including a nightmare sequence that is still unsettling 65 years later.

Every detail of this little film feels intriguing, satisfying and true to its own (slightly warped) logic. A subjective/first-person camera is used for the first half-hour of the movie. Based on a David Goodis novel.

On Friday, Dec. 14, the horrific, unthinkable and heart-wrenching news broke that a gunman opened fire in a Connecticut school and killed 26 people – 20 of them children. All of the children were either 6 or 7 years old. The gunman also killed his mother.

The tragedy brought to mind the first stanza of W.B. Yeats’ poem “The Second Coming.”

Turning and turning in the widening gyre
The falcon cannot hear the falconer;
Things fall apart; the centre cannot hold;
Mere anarchy is loosed upon the world,
The blood-dimmed tide is loosed, and everywhere
The ceremony of innocence is drowned;
The best lack all conviction, while the worst
Are full of passionate intensity.

The question of why this happened can never be adequately answered. Yet there is perhaps some solace to be found in reflecting on the actions of the school’s principal Dawn Hochsprung, along with staff members and teachers such as Victoria Soto, who proved to be heroes of rare unselfishness and uncommon courage.

There are a number of ways to lend your support in the wake of this terrible tragedy. The Sandy Hook Elementary School victims, their families and other survivors will be forever in our thoughts and prayers.

Dita Von Teese perfume is available online in most countries from RonRobinson.

On Sunday, Dec. 16, makeup artist Julie Hewett, who created Scarlett Johansson’s Janet Leigh look in “Hitchcock” and draws from film noir in her product line, is scheduled to give 30-minute private consultations from 10 a.m. to 5 p.m. at Blushington, a makeup studio at 8591 Sunset Blvd., West Hollywood, 90069. Call 310-652-5874 to make an appointment. You’ll be charged a $50 deposit at the time of booking, which can be used toward product purchases.

The Noir File: John Ford’s ‘The Informer’ is a great precursor

At first Gypo pushes aside his anxiety and remorse, and spends the blood money, carousing and drinking with his instant new “friends.”

But gradually, fate and darkness, along with Gypo’s old comrades and his conscience, begin to close in – as the I.R.A. and their just but relentless commander (Preston Foster) track down the informer.

Of all the great film noir precursors of the ’30s – “M,” “The 39 Steps,” “You Only Live Once,” “Scarface,” “Le jour se lève” and “Public Enemy” – John Ford’s Oscar-winning masterpiece, “The Informer,” is one of the darkest, most powerful and most noirish.

Based on the much-admired Irish novel by Liam O’Flaherty, “The Informer” won Oscars for Ford’s superb direction, for Dudley Nichols’ taut, dramatic script, for Max Steiner’s haunting music and for McLaglen’s unforgettable performance as Gypo – a doomed man alone, surrounded by danger, tormented by his own guilt-ridden, fear-lashed soul. (In 1968, Jules Dassin remade “The Informer,” not as effectively, as “Up Tight.”)

5 a.m. (2 a.m.): “Lady of Burlesque” (1943, William Wellman). A salty murder mystery set in the world of strip-tease shows, with Barbara Stanwyck as the stripper-sleuth. Based on the best-seller “The G-String Murders,” a book credited to legendary peeler Gypsy Rose Lee, ghosted by crackerjack comedy/mystery writer Craig Rice (“Home Sweet Homicide”).

12 a.m. (9 p.m.): “The Unholy Three” (1925, Tod Browning). A shivery thriller about three crooks who meet at the circus and form an unholy gang: a strong man (Victor McLaglen), a midget (Harry Earles) and a cross-dressing ventriloquist (Lon Chaney). One of the eeriest of all Browning’s macabre collaborations with Chaney (Silent with music track.)