The Noir File: Lee Marvin is a thief betrayed in ‘Point Blank’

“Point Blank” (1967, John Boorman). Thursday, Jan. 31, 2:45 a.m. (11:45 p.m.) “Point Blank,” with Lee Marvin as a thief betrayed and left for dead in Alcatraz, is, like “Chinatown,” one of the quintessential neo-noirs. Directed with sizzle and panache by John Boorman (“Deliverance”), the movie’s source is one of the super-tough Parker novels by Donald Westlake, with the main character’s name changed to “Walker.” (It’s changed back in the current, and disappointing, movie adaptation, “Parker,” starring Jason Statham and Jennifer Lopez, directed by Taylor Hackford.)

When the unstoppable Walker, his face deadly and determined, takes off after his treacherous old associates (including John Vernon, Carroll O’Connor and Lloyd Bochner) with the help of a mysterious guide (Keenan Wynn), and a glamorous pal (Angie Dickinson), it’s a magnetic, terrifying sight.

“Point Blank” steeps you in its L. A. locale: a surprisingly beautiful sunlit vision circa 1967. With Boorman going all out, this classic movie plays like a grand collaboration among Don Siegel, Alain Resnais and Jean-Pierre Melville. As for Lee Marvin, he’s at the top of his game. So is Angie.

9:45 p.m. (6:45 p.m.): “The Stranger” (1946, Orson Welles). Orson Welles is a post-war Nazi fugitive hiding in a small town, affianced to the lovely but gullible Loretta Young. Edward G. Robinson is the government man on his trail. That cast and this movie’s virtuosic staging and camerawork (by Russell Metty), would make it a gem for almost any other director. For Welles, it’s average, but gripping. 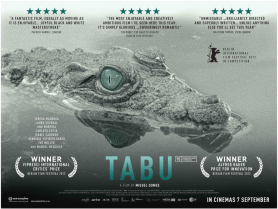 “I was interested in characters we don’t usually meet in films, female characters with distinguishing temperaments and peculiarities” says Portuguese director Miguel Gomes of his film “Tabu.”

Indeed, the finely drawn yet ordinary characters are what drive the story in this languid, sometimes lyrical, film with a neo-noir love triangle at its core. “Tabu” starts slowly, introducing us to newly retired and somewhat restless Pilar (Teresa Madruga) and Santa (Isabel Cardoso), a maid to the elderly Aurora (Laura Soveral), who asks to see a mysterious man from her past once more before she dies.

Her request spurs an exploration of the dramatic life she led and the memorable men she charmed (Ivo Müller and Carloto Cotta) 50 years ago on a colonial farm in Africa, at the foothill of Mount Tabu. (Ana Moreira plays young Aurora.)

The flashback deftly mixes poetry, rock ’n’ roll, amour, adultery and, of course, societal taboos in a compelling and ultimately poignant yarn. By the end, we know Aurora, and the people around her, past and present.

Shot in black and white (35 mm for the first part, 16 mm for the second), “Tabu” has been snaring international awards for its unique blend of romantic drama and visual beauty. Though its unhurried pacing may not be everyone’s cup of tea, Gomes’ “Tabu” rewards the patient viewer.

This festival kicks off with a tribute to actress Peggy Cummins, legendary for her ferocious performance as carnival sharpshooter Annie Laurie Starr in “Gun Crazy” (1950, Joseph H. Lewis). As always, Noir City will feature classics and rarities.

Opening weekend will feature the world premiere of two of the FNF’s latest film restoration projects: “Try and Get Me!” (1950, Cy Endfield) and “Repeat Performance” (1947, Alfred L. Werker).

The San Francisco festival runs Jan. 25-Feb. 3, 2013. The festival (with variations on the program) travels to several other cities throughout the year.

We at FNB can’t wait for the Hollywood fest, which usually arrives in April.

The Noir File: Hawks and Hitchcock top this week’s list

At a Hollywood party, director Howard Hawks decided to prove that Ben Hecht and Charles MacArthur’s racy, breezy, brilliant Chicago newspaper play “The Front Page” – about corrupt politicians and cynical newsmen covering an execution – had the best comic dialogue ever written. Hawks picked up a script, started reading the lines belonging to double-dealing editor Walter Burns. He handed the other script, and the part of ace reporter Hildy Johnson, to an actress at the party. “My God,” Hawks said after a few salty, rapid-fire exchanges, “It’s better this way than it is with two men!”

So Hildebrand Johnson, a part for Pat O’Brien in the 1931 movie of “The Front Page,” became Hildegarde Johnson, a great part for Rosalind Russell in 1940 – not only Burns’ star reporter, but also his leggy ex-wife. Meanwhile, Walter Burns (Adolphe Menjou in 1931) became a great part for Cary Grant. And “The Front Page,” thanks to Hawks, became “His Girl Friday,” the best ’40s noir comedy, with the best and fastest American comic dialogue.

In the 1931 movie of “The Front Page” (directed by Lewis Milestone), Menjou and O’Brien bat around the blistering Hecht lines with almost jaw-breaking speed and rat-a-tat overlap. In Hawks’ gender-bending remake, those terrific lines get even more overlapping virtuosity, supplied by the cool Grant and the hot Russell. Equally memorable was the actor who replaced Mary Brian as Hildy’s fiancé, the yokel husband-to-be Bruce Baldwin – the guy whom Cary describes at one point as “looking like that actor, you know, Ralph Bellamy.”

11:15 p.m. (8:15 p.m.): “Sabotage” (1936, Alfred Hitchcock). Hitchcock’s version of Joseph Conrad’s “The Secret Agent”: Marital problems among a couple who manage a London movie theater (Sylvia Sidney and Oscar Homolka), lead to espionage and terrorism. The film contains one of his most ingenious and terrifying suspense sequences.