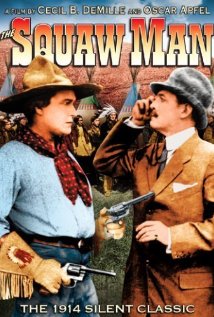 Any idea who Dustin Farnum, Monroe Salisbury and Winifred Kingston were? In fact, they hold a prestigious claim in Hollywood history. They starred in 1914’s “The Squaw Man,” co-written and co-directed by Cecil B. DeMille. The 74-minute flick was the first U.S. feature-length movie.

DeMille, the brilliant (now legendary) director, was somewhat reluctant to take on the project. The best jobs come through networking and, in this case, DeMille had a great contact – his mother got him the gig.

But, once he agreed to make the picture, he was quick to recognize the potential of Los Angeles’ dramatically beautiful scenery for exterior shots. For interiors, DeMille rented a barn at Selma and Vine streets in Hollywood for $200 a month. DeMille’s western saga turned out to be a commercial success and helped establish Hollywood as the world’s top spot for movie making.

The old barn now stands at 2100 N. Highland Ave. and is home to the Hollywood Heritage Museum, which is hosting a “Squaw Man” centennial party on Tuesday, July 1, from 5-8 p.m. The event will include a continuous screening of the movie, special presentations from authors and historians, and a party with retro touches, such as antique cars. Barbeque and beverages will be served. 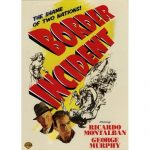 The Hollywood Chamber of Commerce is co-hosting the event. Admission for chamber and museum members is free. Tickets for the general public are $10 for adults (free for kids under 10). There is free parking in Lot D off of Odin St. Register for the party here.

Pick of the Week: Two by Graham Greene and Carol Reed

One of the greatest of all British novelists (Graham Greene) and one of England’s finest film directors (Carol Reed) teamed up for a nonpareil collaboration that produced a classic drama about boyhood, infidelity and murder, “The Fallen Idol” and the Viennese-set postwar thriller that many critics feel is the best of all British films, “The Third Man.” You can catch them both today.

8 p.m. (5 p.m.): “The Pawnbroker” (1964, Sidney Lumet). Scorching drama about a Jewish Holocaust survivor (Rod Steiger) who runs a pawn shop in Harlem, and is haunted and bedeviled by memories of the death camps, while also subject to the hell of everyday life in the modern black New York City ghetto. With Geraldine Fitzgerald, Brock Peters, Jaime Sanchez, Raymond St. Jacques, and the fantastic Juano Hernandez as the old man who wants to talk. From the novel by Edward Lewis Wallant. Searingly photographed in black and white by Boris Kaufman; with a music score by Quincy Jones. 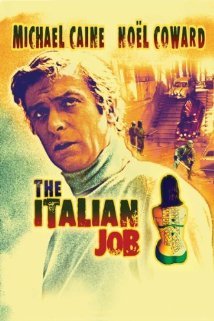 4:15 a.m. (1:15 a.m.): “The Italian Job” (1969, Peter Collinson). Michael Caine, at his most playful, is at the wheel one of the most elaborate – and stylized and stylish – of all the neo-noir heist thrillers. Caine is an ex-con who literally shuts down Turin, Italy to steal a truckload of gold with the aid of computers, a huge gang and three red, white and blue Mini-Coopers. The supporting cast includes Noel Coward (yes, that Noel Coward), Raf Vallone, Benny Hill (yes, that Benny Hill) and Rossano Brazzi. The final heist and chase sequence is a real doozy, one of the most memorably over-the-top of all ’60s action set-pieces. The script is by cult writer Troy Kennedy Martin; the cinematographer is the peerless Douglas Slocombe. 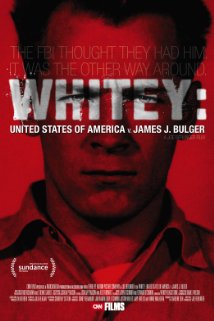 True-crime aficionado and award-winning documentary director Joe Berlinger says he’s always felt he had a civic duty to point out flaws in the criminal justice system. His latest film, “Whitey: United States of America v. James J. Bulger,” looks at the reign of Boston’s most notorious and nefarious mob criminal and probes his ties with federal law-enforcement agencies. In telling Bulger’s sordid yet riveting story, Berlinger makes a case that there was widespread corruption at the FBI and the Department of Justice.

During his decades-long career, James “Whitey” Bulger, 84, became world famous. His irresistible narrative has spawned a cottage industry of books and films, says Berlinger. Johnny Depp is playing Bulger in the upcoming film “Black Mass” and in 2006’s “The Departed,” Jack Nicholson portrayed a character that was partially based on Bulger.

When Bulger went to trial in June 2013 (after being arrested in June 2011 in Santa Monica), Berlinger says he saw an opportunity, as a filmmaker, to separate the man from the myth. “You have a guy who ruled Boston’s criminal underworld for 25 years and wasn’t even stopped for a traffic ticket. Finally the Massachusetts State Police said enough was enough and started forcing an investigation. … The FBI tips off Bulger and he goes on the lam for 16 years. Frankly, I thought he would never be caught.”

For his lifetime of crime, Bulger is serving two consecutive life terms plus five years at a facility in Tucson, Ariz. He was found to have been involved in 11 murders.

In the moral code of the Irish mafia, however, there was a worse offense than taking a life and that was to be a “rat” or an informant to law enforcement. In Berlinger’s film, we meet insiders on both sides of the law, many of whom speculate on whether Bulger committed the gangster’s ultimate betrayal. Berlinger’s take? “I think Bulger was never officially an informant in the truest sense of the word, but there was a relationship there where he was passing some information. The truth was in the middle.”

The film argues, sometimes eloquently and other times a bit heavy-handedly, that government corruption paved the way for the gruesome work of a vicious criminal, often showing us survivors who were left to pick up the pieces in the wake of brutal violence.

As for isolating the man from the myth, there was one interview subject rich with dramatic irony who does not appear in the film. Whitey Bulger is the brother of former President of the Massachusetts Senate, Billy Bulger. Unfortunately, Billy is not on camera.

But who knows? Maybe Johnny Depp will give him a cameo.

Most men are turnips.

Most men, perhaps, but not the homme fatale she falls for. No, strapping tough-guy Sam Wild (Lawrence Tierney) isn’t a turnip. What’s the word I’m looking for? Parsnip? Potato? I know: Psycho! And in Helen he finds his ideal match.

Famous Screen Detectives Day: A day with some legendary hard-boiled (or not) film and literary sleuths, including Dashiell Hammett’s Sam Spade and Nick and Nora Charles and Raymond Chandler’s Philip Marlowe.

12 a.m. (9 p.m.): “Blowup” (1966, Michelangelo Antonioni). A high-living London star photographer in the Swinging ’60s (David Hemmings) photographs a halcyon scene in a beautiful park and then discovers that he may have accidentally recorded a murder happening before his (and our) eyes. One of the great international art films of the ’60s, and a great neo-noir. The scene where Hemmings deconstructs and reassembles the murder scene in his dark room and lab is a masterpiece of editing and suspense. With Vanessa Redgrave, Sarah Miles, Jane Birkin and The Yardbirds. Based on a short story by Julio Cortazar. Music by jazzman Herbie Hancock. 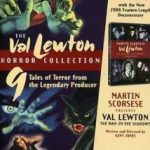 10:45 a.m. (7:45 a.m.): “The Seventh Victim” (1943, Mark Robson). A persistent young woman (Kim Hunter) searches for her missing sister in a New York City that may literally have gone to the Devil. One of the best of the classic Val Lewton RKO low-budget horror movies. With Tom Conway and Jean Brooks.

One of the toughest of the film noir tough guys – as hard-boiled and rough-edged off-screen as he was on-screen – was that inimitable hard-ass hooligan Lawrence Tierney. Tierney, who had a glare that could stop a truck and a hand made for an uppercut or a gat, mostly operated in Poverty Row shows and B-movies, occasionally slipping into a glossier A-film like Duke Wayne’s “Back to Bataan,” in a supporting role.

Tierney’s masterpiece, and a movie in which he genuinely puts your nerves in the shredder and your blood on ice is this column’s Pick of the Week, “Born to Kill” (see above) in which he plays a killer’s killer. If you think you may have seen him, but you haven’t caught any of the movies listed below, you may be recalling his inspired turn as the tough old guy running the show in Quentin Tarantino’s “Reservoir Dogs.”

(By the way, he was not related to Gene Tierney.)

I have a retro kitchen magnet that declares: “It’s not whether you win or lose, it’s how you do your hair.” And how you wear your clothes. 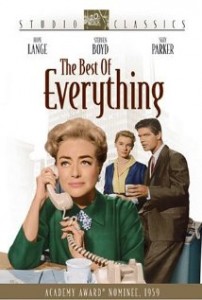 For proof, just look at “The Best of Everything” (1959, Jean Negulesco), which screens at 3 p.m. Saturday at Hollywood’s Egyptian Theatre. In this slick and sexy melodrama, based on a Rona Jaffe novel, Joan Crawford holds court in a New York City publishing house. She’s dressed to the nines in every scene, natch. Her perfectly appointed co-stars are Hope Lange, Diane Baker and Suzy Parker (and look out for a young Robert Evans).

At 2 p.m., there will be an illustrated talk called “Working Women’s Fashion,” which organizers describe as follows:  From Rosie the Riveter to Mary Tyler Moore, explore how working women have influenced fashion from the 1940s to the 1970s. Using period images from myvintagevogue.com and a runway show of vintage examples from clevervintageclothing.com, clothing historian Dave Temple will discuss how working women changed the fashion landscape forever.

A fashion show will follow the talk. Additionally, there will be a clothing sale in the Egyptian’s courtyard from noon to 6 p.m.

Now put it in your planner and don’t be late!