Classic ‘Rashomon’ kicks off Kurosawa tribute at the Crest

Akira Kurosawa of Japan is the “sensei” (or master): a genius of filmmaking and the father of the modern action-adventure movie. 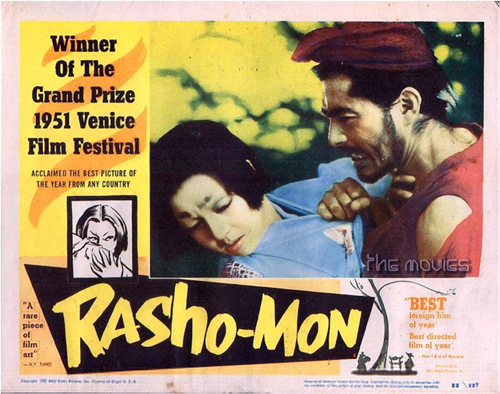 He was one of the three giants of the Japanese Cinema’s Golden Age (with Yasujiro Ozu and Kenji Mizoguchi). He was also a devotee of American action cinema, of film noir and of American Westerns, especially the films of his friend and mentor John Ford. 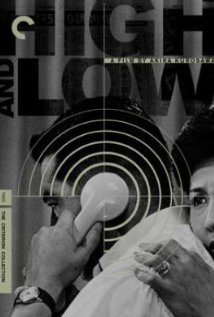 But Kurosawa’s incandescent scenes of violence do not exist in a moral void. Instead, the sensei’s films are infused with a truly adult and humane perspective on life, a mature observation of character and humanity, and a deep sense of the tragedy that faces us all.

Kurosawa has his cinematic peers: Bergman, Fellini, Renoir, Hitchcock, Welles. But he has no superiors, not even his idol John Ford. His films are, like Kurosawa himself, matchless.

You can see five of them on the big screen at the Crest Theater in Westwood during a monthlong tribute to Akira Kurosawa as a part of their salute to foreign filmmakers. The theater will screen one of Kurosawa’s samurai classics every Sunday at 5 p.m. The schedule is as follows:

Sunday, March 1: “Rashomon” – 1950 (1 hr. 28m) The legendary classic about four contradictory views of a murder: the film masterpiece that put Kurosawa, and Japanese cinema, on the international map.

Sunday, March 8: “The Hidden Fortress” – 1958 (2 hr. 6m) The most comical of Kurosawa’s samurai adventure epics, about a warrior who helps rescue a princess. One of the films that most inspired  “Star Wars.”

Sunday, March 15: “High and Low” – 1963 (2 hr. 23m) Inspired by an American crime novel by Ed McBain, this great film noir is about a kidnapping and a businessman who will lose everything if he pays the ransom.

Sunday, March 22: “Yojimbo” – 1961 (1 hr. 50m) The great samurai film, revolving around a cynical warrior who plays both sides in a town feud against each other.

Sunday, March 29: “Seven Samurai” – 1954 (3 hr. 27m) Seven gutsy independent samurai, led by an idealistic veteran warrior, defend a village against vicious marauding bandits. One of the greatest and most exciting films ever made. 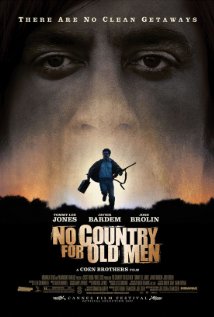 The Coen Brothers’ most praised and prized movie, and one of their most memorable, is the grim, mesmerizing crime-drama/chase-thriller “No Country for Old Men.” The multiple-Oscar winning film is adapted, very faithfully, from one of Cormac McCarthy‘s darkest and most violent novels.

Set in 1980s Texas, in an anti-John Ford Western land of harsh plains and searing deserts, barren cities and the hot, speedy roads that connect all of them, the movie is about a huge cache of illegal drug money that falls into the hands of a local cowboy-hatted small-towner named Moss (Josh Brolin) after a massacre wipes out most of the criminals and smugglers handling the transfer.

Unfortunately, there’s one deadly efficient collector still around: the incredible Javier Bardem as Anton Chigurh a.k.a. Sugar, a terrifying psychopathic killer with a seemingly permanent dour deadpan stare, a laughably lousy haircut and a relentless talent for finding the right people in all the wrong places – and sending them to the hell that surely must have spawned him.

Texas. Tough guys. Epic bad hairstyling. Enjoy your visit to this ‘Country.’ Or else. 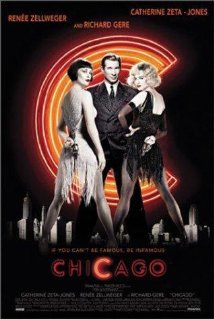 10:15 p.m. (7:15 p.m.): “Chicago” (2002, Rob Marshall). This strange, Oscar-winning hybrid is, of all things, a neo-noir crime courtroom musical. It’s based on the jazzy, snazzy Broadway show by songsmiths Kander and Ebb (of “New York, New York”) and director Bob Fosse, which in turn was based on the classic 1942 film noir “Roxie Hart” by writer-producer Nunnally Johnson and director William Wellman.

The story is as cynical as, well, a ’20s Chicago newspaper guy on deadline. Wannabe star showgirl Roxie (Renee Zellweger in the old Ginger Rogers role) schemes to become famous by committing a near-murder and generating a sensational trial. John C. Reilly is her hapless hubby, Richard Gere is her flashy lawyer, and Catherine Zeta-Jones (an Oscar winner here) steals the whole damned show as another would-be murderess and Roxie’s inspiration. This is a good, splashy, nasty neo-noir, but you can’t help wondering about the movie the late Bob Fosse might have made out of it.

I am very pleased to announce that I have programmed a series for the Will & Ariel Durant Library in Hollywood called Women in Film Noir. The series runs in March to honor Women’s History Month. We are highlighting women’s contribution to the genre at a time when there were many barriers to working outside the home.

I will be giving a talk at the library at 1 p.m.  Saturday, March 7. The opening night double feature is a spotlight on Ida Lupino, actress, director, writer and producer.

5 p.m. March 2: “On Dangerous Ground” (1951, 82 min.): Ida Lupino plays a blind country girl who lives with her brother. She meets a psychologically scarred cop (Robert Ryan) when her brother becomes a suspect in a murder. With a taut script by A. I. Bezzerides (“Kiss Me Deadly”) and moody, poetic direction from Nicholas Ray, “On Dangerous Ground” is an unforgettable film noir. 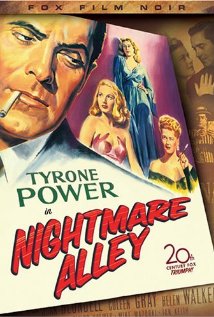 “The Hitch-Hiker” (1953, 71 min.): Fate isn’t smiling when two guys on vacation give a lift to a man who turns out to be serial killer. “The Hitch-Hiker,” starring Edmond O’Brien, Frank Lovejoy and William Talman, is the only classic film noir directed by a woman, the great Ida Lupino. Best known as an actress, Lupino was also a director, writer and producer. She co-wrote “The Hitch-Hiker.”

5 p.m. March 9: “Nightmare Alley” (1947, 110 min.) A film noir set in the seedy world of a carnival, “Nightmare Alley” tracks an ambitious performer (Tyrone Power) as he pursues a better life. Crucial to his rise and fall are three women: Joan Blondell, Coleen Gray and Helen Walker. Unusual for time, Walker plays an upper-class working woman who is not a teacher, nurse or secretary.

Based on William Lindsay Gresham’s novel and directed by Edmund Goulding, “Nightmare Alley” is unusually cerebral and rich with subtext. Also unusual for that time: Barbara McLean served as editor – by 1947, many women had been pushed out of film editing jobs, despite the fact that in the early days of the industry they dominated that function. 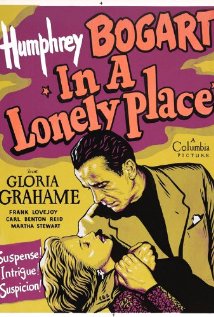 5 p.m. March 16:  “Strangers on a Train” (1951, 101 min.) With standout performances from Robert Walker and Farley Granger, “Strangers” stands as an excellent example of Alfred Hitchcock’s subversive casting. The film is based on the novel of the same name by master of suspense Patricia Highsmith. Czenzi Ormonde (aka Gladys Lucille Snell) co-wrote the script with Raymond Chandler. Pat Hitchcock plays a small but memorable part.

5 p.m. 23: “In a Lonely Place” (1950, 94 min.) Based on a novel by Dorothy B. Hughes, “In a Lonely Place” tells the story of a screenwriter (Humphrey Bogart) and an actress (Gloria Grahame) who live in the same Hollywood apartment building and fall in love. All is not well, however, when it seems the writer might also be a deranged killer. Masterfully directed by Nicholas Ray and edited by Viola Lawrence, sometimes called “Hollywood’s first lady film cutter.”

Time flies, that’s for sure. The Skirball Cultural Center’s superb exhibitions Light & Noir: Exiles and Émigrés in Hollywood, 1933–1950 and The Noir Effect, which began last October, will close Sunday, March 1.

The closing day (March 1) is an ideal opportunity to head up to the Skirball. That way you can see “Cinema’s Exiles: From Hitler to Hollywood,” a 2009 PBS documentary about members of the German film industry who left Europe and re-created their careers in Los Angeles, forever changing the way American movies were made. More than 800 filmmakers fled the Nazis; some found great success in the U.S., but others were less fortunate. Sigourney Weaver narrates the movie.

Film excerpts include: “The Bride of Frankenstein,” “Fury,” “Ninotchka,” “To Be or Not To Be,” “Casablanca,” “The Wolf Man,” “Double Indemnity,” “Phantom Lady,” “Sunset Blvd.,” “High Noon,” “The Big Heat” and “Some Like It Hot.” Also covered will be classics of early German cinema, including “The Cabinet of Dr. Caligari,” “Metropolis,” “The Blue Angel” and “M.”

“Cinema’s Exiles: From Hitler to Hollywood” (90 min.) will start at 11 a.m. Sunday. It is free with museum admission. Museum tickets are available at the door.

I wasn’t terribly impressed with last night’s Oscar ceremony. Long and not very funny, for the most part. But, I enjoyed Richard Brody’s assessment in The New Yorker and present you with these golden moments from Oscars past.

Generally speaking, film-noir titles were not wildly popular with Academy voters. Certainly, a B picture stood little chance of being honored. Film noir movies with bigger budgets and brighter star power might have earned nominations but ultimately lost the Oscar. That said, one category in which film-noir talent held its own was writing.

The Academy recognized that fact in 2010 with its excellent Oscar Noir screening series, which celebrated film-noir classics from the 1940s, all of which were nominated in the writing categories. You can see clips from the series and learn more about the Oscars’ history at www.oscars.org. It’s a terrific resource. While there, I also found out about a quintessential 1940s woman who had a hand in shaping the ceremony as we know it today: Margaret Herrick. Read more about her here.