Stanwyck shines in ‘Crime of Passion’ 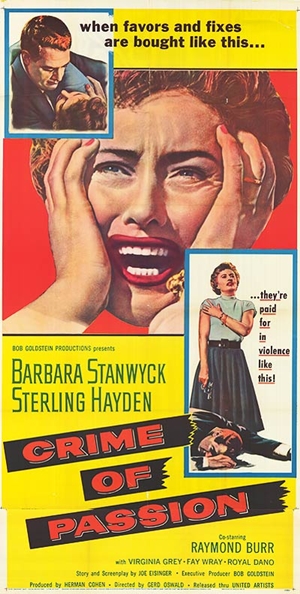 Today is Barbara Stanwyck’s birthday! Stanwyck (July 16, 1907 – Jan. 20, 1990) ranks as one of film noir’s most important actresses, having played perhaps the greatest femme fatale of all, Phyllis Dietrichson in “Double Indemnity.”

Always popular with audiences and admired by colleagues for her uncommon intelligence, versatility and professionalism, she also starred in “The Strange Love of Martha Ivers,” “The Two Mrs. Carrolls” “Sorry, Wrong Number,” “The File on Thelma Jordon,” “No Man of Her Own,” “The Furies,” “Clash by Night,” “Jeopardy,” “Witness to Murder” and “Crime of Passion.”

Aah, how often has Mr E Man fantasized about giving up her dreary day-job. If only she had a lackadaisical husband whose career needed a jumpstart, she’d quite happily quit writing and meddle in his affairs full time. In director Gerd Oswald’s “Crime of Passion” (1957), Kathy Ferguson Doyle (Barbara Stanwyck) makes that noble sacrifice for her hubby.

Kathy is a tough, high-profile advice columnist for a San Francisco newspaper. She’s also a singleton who’s stylish, smart and openly defiant to the male chauvinists in her social circle. She loves dishing out wisdom and doesn’t consider herself lovelorn or lonely-hearted, dismissing marriage and family as “propaganda not for me.” (An interesting turn of phrase from writer Jo Eisinger.)

That’s before Kathy meets her blonde Adonis, aka Police Lt. Bill Doyle (Sterling Hayden), who comes to town with the Los Angeles police as they expand their search for a criminal. Kathy helps them by putting a plea for surrender in her column. The cops nail the killer and Kathy gets a job offer from a New York paper. Alas, she never makes it to NYC because she’s fallen head over heels for Bill. The idea of them moving east for her career doesn’t occur to anyone, even Kathy.

Shortly into their relationship, Kathy has an OMG-what-did-I-do-last-night? moment and asks Bill: “Who are you? Who are you?” Next she peppers him with questions, like “What are your favorite colors?” In fact, what she did was get married. Yep, just like that.

Kathy quits writing, moves to LA and tries to become a dutiful wife. “I hope all your socks have holes in them and I can sit for hours and hours darning them,” she gushes to Bill.

Unfortunately, however, Kathy seriously overrated the appeal of darning socks for hours at a time (shocker) and becomes darn bored.

At social gatherings, she gets stuck chatting with the ladies about cream cheese and olives, and 36-inch TVs. Not exactly thrilling stuff and Kathy starts to go a little crazy. OK, a lot a crazy. (Note to self: Before ditching my drivel-writing, check that husband has cool friends to hang with or at least lives near good shopping and spa treatments.)

To occupy her brain, Kathy engineers a series of stunts to accelerate Bill’s ascent on the career ladder. She befriends the police inspector’s wife Alice Pope (Fay Wray) and does her best to sabotage Bill’s competition, captain Charlie Alidos (Royal Dano). His annoying wife Sara (Virginia Grey) relentlessly promotes her mate, but she’s no match for Kathy.

That just leaves the job of getting the big cheese, police inspector Tony Pope (Raymond Burr), to rally behind Bill. So, she has a fling with Tony, natch. The only problem is that when Tony decides he’s made a mistake, the unlikely lovers don’t see eye to eye, and she grabs a gun …

German-born Gerd Oswald, the son of director Richard Oswald, made his first foray into the noir genre with 1956’s “A Kiss Before Dying” and worked with Anita Ekberg on three noir movies. He also directed “The Outer Limits” and “The Fugitive” TV shows. “Crime of Passion” may not be the director’s finest film, but it’s still strong storytelling – well paced with compelling performances and visually engaging cinematography by Joseph LaShelle. Stanwyck was 50 and Hayden 41; it’s fun to watch these two old pros reeling off their lines and riffing with Burr, of “Perry Mason” TV fame.

I’ve seen some harsh online assessments of “Crime of Passion.” Sure, it has its flaws (55 years later, parts of it might seem stilted and corny) but it’s still a lot of fun and has some pretty biting social commentary to boot.

If you judge a work of art (or entertainment) from the past by contemporary standards, it’s easy for it to fail. A girdle from 1957 didn’t have Lycra; that doesn’t mean it didn’t do the job. 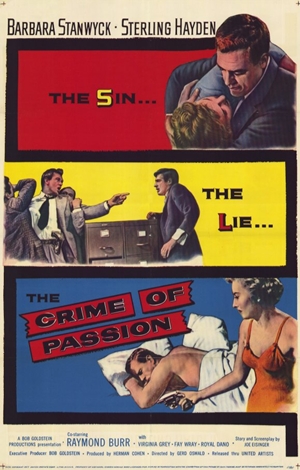