‘A Woman’s Life’ is a story that charms, chills and resonates

“A Woman’s Life” (Une Vie), which had its West Coast premiere at the COLCOA French Film Festival, won the Los Angeles Film Critics Association’s Jury Award at the fest. 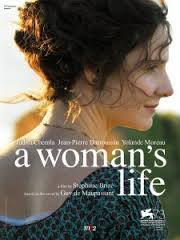 In the opening scene of “A Woman’s Life” (Une Vie), we watch the lovely lead character Jeanne le Perthuis des Vauds (Judith Chemla) watering a vegetable garden on her family estate. The copper watering can gleams in the sunlight, water and mud spatter on Jeanne’s dress. It’s a day like any other for her – unhurried, predictable, peaceful. She is the only child of wealthy land owners in Normandy, France, in 1819, and her comfortable future is taken for granted.

But in fact these days of tranquility will dwindle and, as Jeanne’s life unfolds, we are drawn into her emotionally compelling world, viscerally experiencing her moments of poignancy and pain.

At the urging of her mother (Yolande Moreau), Jeanne marries the dapper but weasely Julien de Lamare (Swann Arlaud), who has a pedigree, a shiny frock coat and not much else. The marriage turns out to be short-lived and their child, Paul, grows up to be a willful, selfish brat of the highest order. (Finnegan Oldfield plays the adult Paul.)
Jeanne continues to love Paul blindly, falling back on her father (Jean-Pierre Darroussin) and the family maid Rosalie (Nina Meurisse) for companionship and support.

Director Stéphane Brizé’s film (which he co-wrote with Florence Vignon, based on Guy de Maupassant’s novel) is subtle, complex and layered. Beautifully shot, impeccably acted and featuring first-rate art direction and costumes, “A Woman’s Life” almost seems to have its own organic existence so heightened and intense is its poetic mood and darkly enchanting atmosphere.

(The novel has been adapted one other time: In 1958, director Alexandre Astruc made “One Life” (Une vie) with Maria Schell and Christian Marquand. It was released as “End of Desire” in the U.S.)

Most obviously, Brizé’s film looks at the strict and narrow conventions that defined a woman’s role in family and society at that time. On another level, it’s a study of loyalty and sacrifice, broken trust and betrayal. Jeanne’s mother’s ulterior motives cause Jeanne suffering; her father’s devotion is steadfast.

After she marries, Jeanne turns to a priest for moral counsel but cannot bring herself to follow his advice, lest she inflict pain on an innocent party. A treacherous decision by one of Jeanne’s acquaintances (Clotilde Hesme) has disastrous consequences. Jeanne’s unwavering love and generosity toward her son become her undoing.

At a time of need, Jeanne is rescued by a friend with whom she has a long and complicated history. The film ends with the ultimate symbol of commitment and perhaps fresh hope.

It’s a story that charms, chills and resonates.

“A Woman’s Life” opens Friday in Los Angeles at the Laemmle Royal Theatre and the Laemmle Playhouse 7.

Basinger and Pearce delight a sold-out audience at anniversary screening of ‘L.A. Confidential’ Italian-French ‘Like Crazy’ is crazy good