For author Tere Tereba, mobster Mickey Cohen is the ultimate anti-hero and the story of Los Angeles

Of America’s many grand and gaudy cities, Los Angeles has long been the ultimate siren.

This is the noir metropolis, both sunny and sordid, that gangster Mickey Cohen made completely his own. Brooklyn-born and LA-raised, Cohen as a young adult was uneducated, illiterate and had difficulty counting. But he was smart, tough, ambitious, ruthless, immoral and wildly lucky.

He was also the ne plus ultra dreamer, lured by seemingly limitless opportunity to reinvent himself by acquiring staggering amounts of money and clout. It’s hard to imagine his rise from grubby paper boy to one of the most prominent figures in the underworld taking place anywhere but the City of Angels.

Indeed for author Tere Tereba, Cohen is Los Angeles. Her book “Mickey Cohen: The Life and Crimes of L.A.’s Notorious Mobster” (ECW, $16.95 paperback/$29.95 hardcover) outlines the history of the man and the city, from Prohibition to the mid ’70s. “He was LA’s top mobster for a generation,” Tereba recently told me over a glass of iced tea in her elegant living room.

“He terrorized, captivated and corrupted Los Angeles. He’s about to be introduced to the American public through ‘Gangster Squad’ (the upcoming movie in which Sean Penn plays Cohen) and people don’t know who Mickey Cohen really was.”

Tereba, an award-winning fashion designer and journalist, is a quintessential Angelino. Born in Warren, Ohio, she has lived here since childhood. As a teenager, Tereba frequently saw bands at Sunset Strip clubs and connected with Jim Morrison’s girlfriend, Pamela Courson, who jump-started her design career.

Tereba’s account of Morrison in Paris was selected by The Doors to appear in their book, The Doors: An Illustrated History. In addition to her creative talent, Tereba’s classic features and stop-and-stare bone structure drew much attention, from the likes of famed Hollywood photographer George Hurrell for whom she modeled and Andy Warhol, who cast her in his 1977 black comedy “Bad.” Warhol described Tereba as looking like Hedy Lamarr and acting like Lucille Ball.

The day I met her, she wore a chic black dress, a vintage shrimp-pin and zebra-stripe pumps. “I could put on one of my Irene suits, if you want,” she offered, with a laugh.

Tereba’s book renders a portrait of a complex and compelling man in a city ripe with chances to strike it big, especially for unscrupulous players. Of Cohen’s return to the West Coast in 1937 after a stint in Cleveland and Chicago, Tereba writes: “He found Los Angeles to still be a big small town. The underworld setup, the 23-year-old learned, was not the eastern system.” Or as Cohen put it, “Gambling and everything … was completely run by cops and stool pigeons.”

Fast forward to the fall of 1955, when Cohen, 42, was released from McNeil Island Federal Penitentiary. Tereba describes Cohen’s turf this way: “The land of perpetual summer, carnal delights, and blue-sky ennui still captured the imagination of dreamers everywhere. But L.A. had changed. Bigger and bolder than ever, freeways linked the suburban sprawl. Hollywood’s old guard had lost their luster; a new and different breed was on the horizon.”

Speaking of Hollywood, Tereba’s book explores the intersection between mafia characters and the Tinseltown elite, such as the 1958 fatal stabbing of Johnny Stompanato by Lana Turner’s daughter, Cheryl Crane.

Until Cohen’s death on July 29, 1976 (he died in his sleep, having survived 11 assassination attempts over the years), the brawny former boxer lived each moment intensely, often courting publicity and flaunting his power.

Said Tereba during our interview: “He was the ultimate anti-hero because he did what he wanted to do. He went against the cops, he fought city hall. He did all the things you’re not supposed to do and everybody’s afraid to do.

“You don’t get more outrageous and brazen than Mickey Cohen. Even his showy style of doing business. He dressed the way he wanted to, in a semi-Zoot suit. He knew what he liked and he followed it.”

Some facts are already well known. In setting the scene, Tereba reminds the reader: “After the [1938] scandal decimated the LAPD, the city of Los Angeles was closed to underworld activity. But Los Angeles County remained wide open.

“Sheriff Eugene Biscailuz’s mighty domain stretched from Lancaster in the north to Catalina Island, 26 miles off the coast, south to Orange County, and east to San Bernadino County – from the desert to the mountains to the sea.

“Geographically the largest county in the country, at more than 4,000 square miles, it was bigger than many eastern states and made up 43 percent of the state’s population.”

She also reveals never-before-released documents and information, such as the anxiety disorder Cohen struggled with for most of his life, his wife LaVonne’s unsavory background and his relationships with women after he and LaVonne divorced in 1958.

Much has been written, speculated, invented and whitewashed about Cohen and his city. Tereba spent more than 10 years researching and writing her book; she tells Cohen’s story swiftly and assuredly. Her page-turning and entertaining narrative neither glamorizes nor judges its subject. 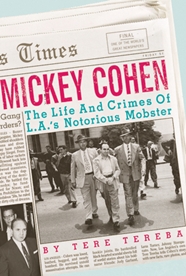 By the time “Gangster Squad” hits screens this fall and plants Mickey Cohen firmly in the spotlight (which he would have loved) Tereba’s readers will have already pierced through the shadows that have shrouded him for decades.