Courtesy of WHV, I will be giving away the Bogart set, which contains “They Drive by Night,” “Across the Pacific,” “Action in the North Atlantic” and “Passage to Marseille.”

(Additionally, WHV and TCM will release the Greatest Gangster Films: Humphrey Bogart set, featuring “High Sierra,” “The Petrified Forest,” “The Amazing Dr. Clitterhouse” and “All Through the Night.”)

To enter the June giveaway, for the Classic Legends: Humphrey Bogart set, just leave a comment on any FNB post from June 1-30. We welcome comments, but please remember that, for the purposes of the giveaway, there is one entry per person, not per comment.

The winner will be randomly selected at the end of the month and announced in early July. Include your email address in your comment so that I can notify you if you win. Your email will not be shared. Good luck! (Josh is the winner of the May reader giveaway, a Blu-ray set of “Body Heat,” “L.A. Confidential,” and “The Player.” Congrats to Josh and thanks to all who entered!) 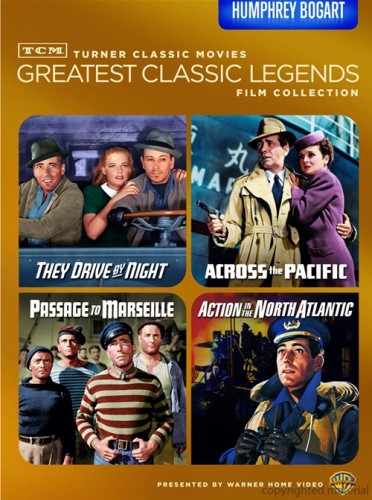 Here’s more info on the movies in the Classic Legends: Humphrey Bogart set.

THEY DRIVE BY NIGHT (1940) – Bogart and George Raft share a driving ambition in a feisty tale of brothers trying to make it as independent truckers in this fine example of Warner Bros. social-conscience filmmaking that’s also a film noir. Ann Sheridan and Ida Lupino also star.

ACROSS THE PACIFIC (1942) – In this wartime thriller, Bogart plays U.S. counterspy Rick, who trades barbs with Mary Astor, matches wits with Sydney Greenstreet and swaps bullets with saboteurs of the Panama Canal. John Huston directs this reunion of the three stars of “The Maltese Falcon.”

ACTION IN THE NORTH ATLANTIC (1943) – This World War II salute to Allied forces stars Bogart as First Officer Joe Rossi, who, along with his captain (Raymond Massey), matches tactics with U-boats and the Luftwaffe. The tactics are so on target that this became a Merchant Marine training film.

PASSAGE TO MARSEILLE (1944) – Bogart reunites with director Michael Curtiz and other key “Casablanca” talent for a tension- and controversy-swept story of a French patriot who escapes Devil’s Island, survives a dangerous freighter voyage and becomes a gunner in the Free French Air Corps.