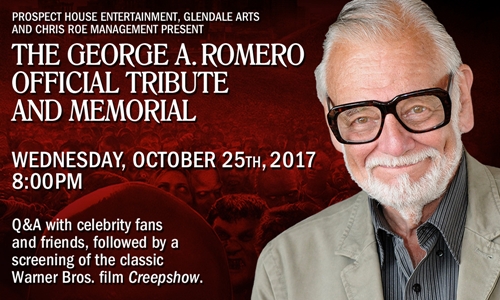 An indie director before the term was widely used, George Romero carved his own niche in the horror genre by brilliantly marrying over-the-top blood and guts with sharp social satire.

Comic book fans will no doubt appreciate Romero’s “Creepshow,” a 1982 black comedy shot in Pittsburgh, as were many of his other flicks. (Romero graduated from Carnegie Mellon University in Pittsburgh in 1960.)

Starring Hal Holbrook, Adrienne Barbeau, Fritz Weaver, Leslie Nielsen, Ted Danson and E.G. Marshall, the film was Stephen King’s first script. King also plays a part in one of the five stories, which are inspired by the EC and DC comics of the 1950s.

You can see “Creepshow” on the big screen on Wednesday, October 25, at the Alex Theatre in Glendale. The Alex is hosting a tribute to Romero with a preshow reception and Q&A.

‘Jane’ documentary is a joy to watch As AFI turns 50, this year’s fest looks set to be one of the best