One of the many highlights of the TCM Classic Film Festival is Sunday’s showing of “Taxi Driver” by Martin Scorsese, which this year turns 35. One of the most sordid urban nightmares ever, “Taxi Driver” stands as the ultimate big-city bad dream.

And where else could it be set but New York City? In the mid-1970s, the mighty metropolis seemed to be falling apart: the economy had stalled, people were deserting the troubled island in droves, and crime was rampant. (Other cinematic portraits of the dismal period are “The French Connection” 1971 by William Friedkin and John Schlesinger’s “Midnight Cowboy” 1969.)

In the middle of this urban mess is anti-hero Travis Bickle (Robert DeNiro) – a Vietnam vet and taxi driver, whose desperate loneliness and disgust with NYC’s squalor and decay slowly pushes him over the edge of sanity. Long hours of driving jerks and freaks around isn’t good for anyone’s mental health, let alone an introverted downer like Travis.

Early on, there seems to be a shimmer of hope when Travis encounters a woman named Betsy (Cybill Shepherd), lovely and stylish, ambitious and free-spirited (kudos to costume designer Ruth Morley). Betsy is a campaign worker for Senator Charles Palantine (Leonard Harris), who is making a bid for the presidential nomination. Rather surprisingly, Betsy agrees to meet Travis for coffee. Rather astonishingly, Betsy agrees to go on a date with him, which thoroughly annoys her co-worker Tom (Albert Brooks).

After that, Travis tries to keep busy – you know, the usual breakup stuff – writing in his journal, shaving his head, talking to himself in the mirror, buying guns and pointing them at Palatine. When Travis spies a child prostitute as she walks the streets (Jodie Foster), he makes it his mission to rescue her from the degradation of working for sicko pimp ‘Sport’ Harvey Keitel. His quest, fueled by his worsening mental illness, culminates in out-of-control violence.

Once you see “Taxi Driver,” you’ll never forget it. Coming on the heels of Vietnam and Watergate, the film tapped the overall dark mood of the nation and did well at the box-office. Additionally, it catapulted Scorsese and writer Paul Schrader into the big league, making its mark with the Hollywood tastemakers and earning four Oscar noms: best picture (it lost to “Rocky”); best actor (De Niro); best supporting actress (Foster); best original score (Herrmann). It also won the Palme d’Or at Cannes.

Though he didn’t win the Oscar, DeNiro turned in one of the best and most iconic performances of his career, spanning the emotional gamut from hardened cynicism to earnest and utter sadness. The most moving scene for me is when he sends a corny anniversary card to his parents and jots down some details of a life he pretends to live. Foster’s performance is raw and gutsy. Keitel’s brief but searing scenes are repulsive, disturbing, stomach churning; even for crime-movie aficionados, they are hard to watch.

Scorsese’s virtuoso filmmaking taps the sensibilities of the finest American and European filmmakers. He draws thematic inspiration from classic Western director John Ford (specifically 1956’s “The Searchers”) and from his beloved ’30s and ’40s crime movies as well as the visual aesthetic of French New Wave auteurs. END_OF_DOCUMENT_TOKEN_TO_BE_REPLACED 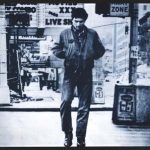