On the radar: Paris pleasures, the Plaza goes ‘Gatsby’ and film fixes in Los Angeles

The City of Lights City of Angels (COL•COA) film fest at the Directors Guild in Los Angeles ends Monday night. On the slate are free screenings as well as announcements about awards and contest winners.

In the mood for a trip to Paris? In addition to the City of Light’s usual coolness, I found out about these two shows. Also, as always, there are noteworthy noirista events in New York and Los Angeles. 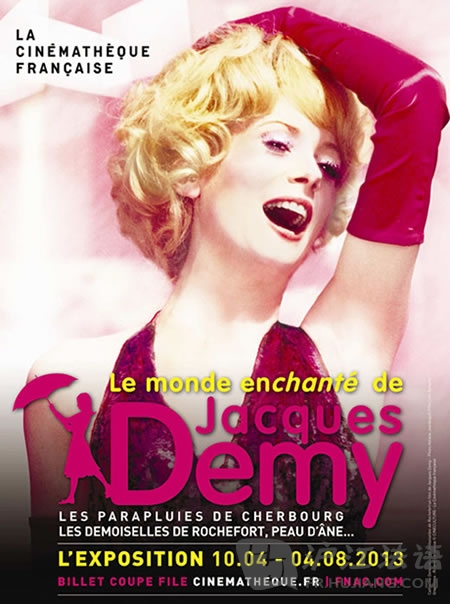 “The Enchanted World of Jacques Demy,” at Cinémathèque française, presents film clips alongside costumes, photographs, paintings, drawings and sculptures created by artists who were influenced by the New Wave director. Closes Aug. 4.

A 200-foot long garden, created by landscape designer Piet Oudolf, marks the entrance to “No. 5 Culture Chanel,” an exhibition opening May 5 at the Palais de Tokyo. Coco Chanel launched No. 5, now a world-famous fragrance, in 1921. This show surveys art, photographs, films and music from that era, and highlights her plummy social network. (High-profile chums included Picasso and Jean Cocteau). Curated by Jean-Louis Froment. Closes June 5.

The Plaza Hotel in New York is hosting “The Great Gatsby Getaway” contest. One winner and a guest will win film-premiere tickets, a night at The Plaza, plus an f&b credit. The movie hits theaters May 10. Broadway nitty gritty: Alec Baldwin plays a gangster on the lam in “Orphans,” a revival of Lyle Kessler’s 1985 play at the Gerald Schoenfeld Theatre. Closes June 30.

The American Film Institute (AFI) Night at the Movies, a one-night-only event, takes place Wednesday, April 24, at the ArcLight Hollywood, 6360 W. Sunset Blvd. This is a chance to see classic movies with the filmmakers and stars who made them. It’s a great lineup, boasting some top-notch noirs. You can also see the schedule for Classics in the Dome, eight films that will show early next month.

The much-anticipated Turner Classic Movies Film Festival starts Thursday, April 25, and runs through Sunday, April 28. This year’s theme is cinematic journeys. We at FNB will be out at this fest in full force, natch.

The Los Angeles Visionaries Association (LAVA) will host a Dashiell Hammett evening on Saturday, April 27, at the Los Angeles Athletic Club (downtown). Hammett is remembered for for his contributions to hard-boiled crime fiction and his stand against McCarthyism. Join Hammett scholar and granddaughter Julie M. Rivett as she explores her grandfather’s controversial political life, his relationship with Lillian Hellman, and the decades of consequent troubles that have tangled Hammett’s estate. Ticket includes dinner and parking; cash bar.

One more reason to love Turner Classic Movies: The network has compiled a list of 10 favorite movie moments featuring Marilyn Monroe. The list comes as TCM gears up for its Battle of the Blondes this month, which kicks off Nov. 2 with a Marilyn Monroe double feature.

First on the fave moments list is Marilyn looking up at Louis Calhern in the classic noir “The Asphalt Jungle” from 1950 directed by John Huston. Third on the list is her sexy walk in “Niagara,” Henry Hathaway’s 1953 Technicolor noir. (“Niagara” and 1959’s “Some Like It Hot” by Billy Wilder are tonight’s double bill.)

Throughout November, TCM will celebrate Hollywood’s greatest blondes. Each Monday and Wednesday night’s lineup will feature two blondes going head-to-head in a pair of double features, including Marilyn Monroe and Jayne Mansfield on Nov. 2, Veronica Lake and Lana Turner on Nov. 7, Judy Holliday and Jean Harlow on Nov. 9, Marlene Dietrich and Ursula Andress on Nov. 14, Carole Lombard and Mae West on Nov. 16, Janet Leigh and Brigitte Bardot on Nov. 21, Betty Grable and Doris Day on Nov. 23, Julie Christie and Diana Dors on Nov. 28 and Grace Kelly and Kim Novak on Nov. 30.

Noir gems include “Eyes Without a Face,” “The Killers,” “Nightmare Alley” “Le Cercle Rouge,” “Once Upon a Time in Anatolia” and “We Need to Talk About Kevin.” Topping my new-viewing list is: “Miss Bala,” “Art History,” “Carnage,” “Shame,” “Kill List” and “The Artist.”

The festival runs through Nov. 10 in Hollywood and I look forward to covering it.

Lines to remember: Continuing through Nov. 13, the Los Angeles Poetry Festival is hosting Night and the City: L.A. Noir in Poetry, Fiction and Film. There are readings, screenings and discussions in various locations. I’ve marked my calendar for the Raymond Chandler open reading on Nov. 6 in Hollywood.