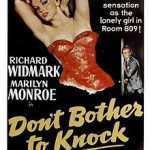 Great writing and a strong cast (Marilyn Monroe, Richard Widmark, Elisha Cook, Jr., Anne Bancroft) make 1952’s “Don’t Bother To Knock” by Roy Ward Baker a cinematic treasure, but one that is, sadly, often overlooked. Monroe plays a deranged baby-sitter who likes diamonds, perfume and negligees (ok, she’s clearly not completely bonkers) but can’t seem to put her past behind her.