Hollywood Costume comes to the Wilshire May Co. building

Starting on Oct. 2, you can stroll through history in style at the Hollywood Costume exhibition, which is housed in the Wilshire May Company building (at Wilshire Boulevard and Fairfax Avenue in Los Angeles), the future location of the Academy Museum of Motion Pictures.

Organized by the Victoria and Albert Museum in London and sponsored by Swarovski, this show explores costume design as an essential tool of cinematic storytelling. (The show runs through March 2, 2015.)

Summing it up perfectly was a quotation inside the show from Adrian, a legendary Golden Age designer and creator of “The Wizard of Oz” ruby slippers, which are on display. Said Adrian: “Few people in an audience watching a great screen production realize the importance of any gown worn by the feminine star. They may notice that it’s attractive, that they would like to have it copied, that it is becoming.

“The fact that it was definitely planned to mirror a definite mood, to be as much a part of the play as the lines or the scenery seldom occurs to them. But that most assuredly is true.”

More than 150 iconic costumes curated by Deborah Nadoolman Landis will be on display – including Marlene Dietrich’s costumes from “Morocco” (1930) and Marilyn Monroe’s infamous white dress from “The Seven Year Itch” (1955) as well as Jared Leto’s costume from “Dallas Buyers Club” and several entries from “American Hustle” and “The Great Gatsby” (all 2013).

Film noir makes a showing (there’d be trouble otherwise!) with Kim Novak’s emerald-green dress from “Vertigo” and Tippi Hedren’s pale green dress from “The Birds,” not to mention examples from “Mildred Pierce,” “Bonnie and Clyde,” “L.A. Confidential,” “The Big Lebowski,” “Basic Instinct” and “No Country for Old Men.” The work of legendary Edith Head is well represented.

In conjunction with the Hollywood Costume exhibition, the Academy will present screenings, starting Saturday with a terrific double feature: the Coen Brothers’ “No Country for Old Men” and “The Big Lebowski.” Several of the featured costume designers will appear in person to introduce their films.

Designer and curator Deborah Nadoolman Landis originally approached the Academy several years ago with the idea for the show. The Academy passed on Hollywood Costume, so Landis took it to London’s V&A, which snapped it up.

Now the Academy apparently feels the time is right for the show. Commenting on the irony of London having the show first, Landis said, at the press preview Monday: “You can’t be a prophet in your own land.”

‘Sea of Love’ is a neglected neo-noir with hidden depth 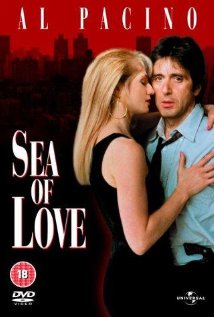 Deftly directed by Harold Becker, with a magnificent script by Richard Price, “Sea of Love” is a deeply satisfying neo-noir, which has been oddly neglected since its 1989 release.

One of the movie’s many strengths is a knock-out lead performance by Al Pacino as veteran NYC police detective Frank Keller. Frank is feisty, hard-working and intense, but he’s got weaknesses aplenty: he drinks too much, as does his elderly father (William Hickey), he’s sick of his job, and his ex-wife left him to hook up with his fellow cop, Gruber (Richard Jenkins).

Meanwhile, Frank’s got a crime to solve: Two men have been shot in the head in their bedrooms. Lipstick-smeared cigarette butts point to a female killer. Said killer apparently finds her victims by answering singles’ ads in a magazine.

Frank figures: why not place an ad and see if the murderess shows up for a get-to-know-you drink? So, aided by jovial chubster Det. Sherman Touhey (John Goodman), they meet a procession of available women, including one who quips, lest you forget you’re watching a neo-noir: “Fate sucks, I swear!”

The most intriguing candidate, though, is a slim, flinty blonde in a red-leather jacket named Helen Cruger (Ellen Barkin). Finding that he’s attracted to her, Frank puts her name at the bottom of the suspect list, and the two begin an uneasy love affair. We learn that Helen runs a shoe store on 57th Street and that she’s divorced with a young daughter.

The passion grows and the police work proceeds, but neither are smooth sailing especially when another man (this one married, with a family) turns up dead, with the same MO. No one likes to put pressure on a relationship in those early, heady days, but at the same time it’s best to know asap if firearms are tucked inside a gal’s baggage.

It’s a tense wait to see how Frank rates as a judge of character. But I didn’t mind the wait one bit; in fact, I didn’t want this flick to end. Even though the plot is fairly straightforward, there are many layers of subtext to the central narrative and there’s an earthy realness in every scene. For example, the opening is a police bust that has nothing to do with the imminent murders – don’t blink and you’ll see young Samuel L. Jackson.

In the DVD commentary, director Becker, a New York native, calls these slightly off-track parts “moments that build the rich texture of New York life.” To that end, Becker took particular care casting the many smaller roles, choosing “New York actors who would give authenticity and richness to the scene.”

Pacino’s wonderful in this part, his first screen role after a several-year hiatus during which he worked in theater, his first love. Though it’s not much of a stretch for him, the always-engaging Goodman makes the ideal partner for Pacino. Barkin effortlessly inhabits Helen – a tough working girl who gives as good as she gets, as Becker puts it. (Becker further describes Barkin as being beautiful with a boxer’s nose, which might not exactly endear him to her.)

Of course, Gotham City itself also serves as a major character, with brash, bold attitude and cheeky swagger, that has lent an air of mystery to many a noir. Becker says he tapped cinematographer Ronnie Taylor to help him tell a story with light and shadow.

Harold Jones’ sax-drenched score helps conjure the mood of a New York nightscape: thrilling and sad; transient and eternally alluring. (The soundtrack also includes a Tom Waits cover of “Sea of Love.” The original was a 1959 Phil Phillips song.)

Another key ingredient: “Sea of Love’s” first-rate script by Richard Price, a precise and accurate rendering of police work and their lingo as well as a sympathetic take on singles seeking other singles.

And it’s funny. There are many LOL moments – for instance, when Frank and Sherman are assessing their lonely-heart suspects, Sherman asks Frank: “Think you could go for a babe with a dick?” to which Frank replies: “Depends on her personality, really.”

I suspect that “Sea of Love” served as inspiration for 1992’s “Basic Instinct,” written by Joe Eszterhas, who reportedly snagged a $3 million paycheck for the story of police detective Michael Douglas falling in love with murder suspect Sharon Stone. I’d bet $3 million that Price didn’t get nearly as much Eszterhas. “Basic Instinct” can boast high gloss, inventive cinematography and a famous shot of Stone without underwear, but “Sea of Love” is a smarter, far more human, and funnier movie.

Does anyone know what Richard Price is doing these days? In this era of online dating, maybe we need a Sea-quel.

“Sea of Love” is available on DVD and Blu-ray from Universal on Amazon.

What’s new at the Aero, Egyptian: Hurray for Harlow!

Get your blonde on this Sunday at the American Cinematheque. Hollywood’s Egyptian Theatre will host a Jean Harlow centennial tribute, co-presented with the Art Deco Society of Los Angeles, featuring a slideshow, book signing and screening. Harlow’s birthday was today, March 3, 1911.

The Cinematheque event starts at 2 p.m. Sunday with a slideshow on Harlow, the first blonde sex symbol. At 3 p.m., Darrell Rooney and Mark A. Vieira, authors of the new book “Harlow in Hollywood,” will sign books in the lobby. After the ink is dry, stay for the screening of Harlow’s screwball comedy/satire “Bombshell” from 1933, directed by Victor Fleming. Turner Classic Movies is also paying tribute to Harlow this month; for more details, visit https://www.tcm.com/this-month/article/362075%7C0/Jean-Harlow-Tuesdays-in-March.html.

Other highlights of the Cinematheque’s schedule include:

Charles Laughton gets some love with a double feature at the Egyptian. Laughton directed “The Night of the Hunter,” starring Robert Mitchum, and starred in Alfred Hitchcock’s “Witness for the Prosecution”; 7:30 p.m. Friday, March 11.

Sharon Stone will visit the Aero for a discussion, after the showing of “Casino” at 7:30 p.m. Friday, March 18.

More stunning Stone fare at the Aero: “Basic Instinct,” which marks its 20th anniversary, and “The Quick and the Dead” at 7:30 p.m. Saturday, March 19.

Director Michael Mann will attend the Egyptian’s 25th anniversary screening of “Manhunter” at 7:30 p.m. Saturday, March 19. There will be a discussion after the movie.

Be sure to check complete schedule. The Egyptian Theatre is at 6712 Hollywood Blvd. The Aero Theatre is at 1328 Montana Ave. General admission is $11; members pay $7.