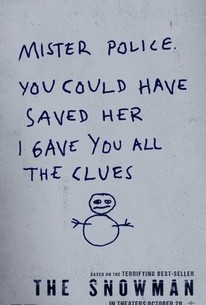 Looking at the billboard posters for “The Snowman” (2017, Tomas Alfredson), I had the feeling that if I paid close attention while watching the movie, I might see a red flag or perhaps spot a clue that the police miss in a complex and carefully constructed story of a serial killer on the loose.

And since it’s set in Norway (haunting snowscapes, frozen lakes and austere mountains abound), I figured this tipoff to patient viewers would likely be a visual one – the Scandinavians being a tight-lipped crowd for the most part.

But about 45 minutes into this film, in which Michael Fassbender plays Detective Harry Hole, I realized that hanging in there was not going to pay off – that this was a complex and sloppily constructed story that was probably going to leave me feeling disappointed and frustrated.

Despite Alfredson’s success in 2011 with the multilayered “Tinker Tailor Soldier Spy,” he seems out of his depth and overwhelmed with “The Snowman.” The narrative is confusing, the flashbacks don’t connect well with the present, the characterizations are haphazard. A case in point: Early on, we see Harry lying on a park bench shivering. There’s no explanation and the rest of the time he seems calm, measured, decisive and compassionate. Eventually, we learn he is an alcoholic. Oh, OK.

Similarly, his colleague Katrine Bratt (Rebecca Ferguson), despite showing ingenuity and fierce determination, in the end, must resort to time-worn feminine wiles to land her suspect. Good thing she’s gorgeous!

Charlotte Gainsbourg’s character doesn’t have a last name but at least she’s elegantly dressed. Whatever.

Most vacant of all: Chloë Sevigny’s two characters (she plays twins) – one of whom is a dour-faced chicken slaughterer. ’Nuff said.

Considering, too, that the film was based on Jo Nesbø’s best-selling series of novels, there was reason to hope for a well made, intelligent, engrossing movie. Maybe there were too many screenwriters? (Peter Straughan and Hossein Amini lead the list.)

Or maybe this would have been better off as a TV series, where the serpentine storylines could play out and the characters could have more time to develop. Unfortunately, “The Snowman” we ended up with is mostly slush.

“The Snowman” opened Oct. 19 in Los Angeles and is now on general release.