COL•COA fest to open with a Danièle Thompson comedy 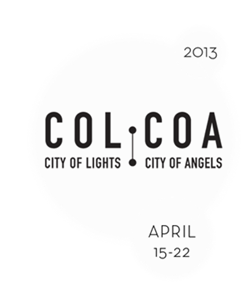 One of my favorite film festivals starts in a few weeks. The City of Lights, City of Angels (COL•COA) film festival, a week of premieres in Hollywood, runs April 15-22. Last night, at the French Consulate, the Franco-American Cultural Fund announced the program for the fest, now in its 17th year.

“We are proud to offer the biggest and most exclusive program ever, including, for the first time, a new series that highlights the French film industry’s support of world cinema,” said François Truffart, COL•COA executive producer and artistic director.

COL•COA will feature 38 features and 19 shorts. It opens on Monday, April 15, with the North American premiere of “It Happened in Saint-Tropez,” a Danièle Thompson comedy, starring Kad Merad and Monica Bellucci. The film will be released in France on April 10.

Of course, I am most looking forward to the film noir series, which will include “Armed Hands,” co-written and directed by Pierre Jolivet.