After four days of back-to-back noirs at the Arthur Lyons Film Noir Festival in Palm Springs, it is hard to return to reality. I keep expecting to see men in fedoras and mink-coated molls. Or to hear terse whispers from crooks working a heist or an imperious “Ah, shut up” a la Joan Crawford. Well, it’s a rainy day and it’s still early so you never know what might happen.

The annual noir gathering, now in its 11th year, is one of my favorite fests and such a great chance to mingle with other noiristas, such as producer and programmer Alan K. Rode and the rest of the Dark City Players: Marvin Paige, Foster Hirsch, Kim Morgan and Eddie Muller. Ric and Rozene Supple are the fest’s executive producers and the Camelot Theatre does a great job hosting the event. The festival is named after its founder Arthur Lyons Jr., an author and longtime resident of Palm Springs.

From the first notes of Henry Mancini’s silky score for “Experiment in Terror,” which opened the fest, to the Palm Springs locations of 60 years ago, shown in the final movie, “The Damned Don’t Cry,” there was much to relish. In “Experiment in Terror” from 1962, Ross Martin hatches a plot to anonymously extort money from Lee Remick; his efforts are thwarted by FBI agent Glenn Ford.

It’s hard to shake the mood of menace that director Blake Edwards creates in this chilling tale. Stefanie Powers, who played Remick’s younger sister, spoke after the screening. “Nobody shot that way,” she said of Edwards’ daring camera, adding that the film may be the first time that someone died on screen, eyes open.

I can never get enough of Dan Duryea, star of “Underworld,” and seeing Tony Curtis in “Six Bridges” was a rare treat. “You can’t help liking him even if he is a criminal,” said co-star Julie Adams in the post-screening Q&A, noting the natural charm Curtis brought to the part of inveterate schemer Jerry Florea. Sal Mineo made his screen debut in this movie, as the young Jerry, leader of a Boston street gang.

Then it was time for a dash of luscious color: The broad gaze of CinemaScope catches the hard-core badness of college student and casual killer Bud Corliss (Robert Wagner) in “A Kiss Before Dying.” Though he was voted most likely to succeed in high school, at 25, he’s still stuck in college, despite the support of his doting mom (Mary Astor). He figures it would be a whole lot easier to ditch the books and marry into a rich family, even if it requires a murder or two.

Co-starring as his love interests are Joanne Woodward and Virginia Leith, both of whom are excellent. Director Gerd Oswald, a mainstay of the classic TV show “The Outer Limits” and the son of Vienna-born director Richard Oswald, elicits memorable performances, particularly from the young and sexy Wagner.

Mitchum’s portrayal of Max Cady, a brutal sadist seeking revenge, is one of his best and most famous roles. On hand to reminisce after the movie was Chase, also an accomplished dancer who partnered with Fred Astaire on his TV specials. Chase said of Mitchum in this movie: “He was fantastically attractive as a horrible person.”

When she rehearsed her scene with Mitchum (she played a victim of his brutality), he made it very clear that he had nothing on under his pants. “It struck me as funny,” she said. (The audience had the same reaction.) “He was very kind and protective after that; he treated me like a kid sister.”

Also, Chase said, despite giving the impression that he winged it when it came to acting, Mitchum was “totally prepared, he knew exactly what he was going to do.” As for how she broke into movies, she told the audience she got the requisite encouragement to follow her dream from “a fella named Stanley Kubrick” whom she was going out with at the time.

On Saturday morning, critic Kim Morgan introduced “99 River Street” (1953, Phil Karlson) starring John Payne and Evelyn Keyes. Morgan pointed out that the film is a great example both of cinematographer Franz Planer’s work (he was on “Criss Cross,” 1949; “Letter from an Unknown Woman,” 1948; “Bad for Each Other,” 1953, and many others) and of the boxing noir sub-genre, along with “Body and Soul,” 1947, and “The Set-Up,” 1949. All three films, Morgan pointed out, likely would have been on Martin Scorsese’s radar as he prepared to make 1980’s “Raging Bull.”

Next up was “Plunder Road” from 1957, directed by the underrated Hubert Cornfield (“The Night of the Following Day,” 1969) and lensed by Ernest Haller. A reported favorite of Quentin Tarantino, this lean little caper flick is about a group of men stealing gold from a train, hauling it off in commercial trucks and melting it down in a foundry before getting it out of the country. It’s wildly far-fetched, true, but still a good time.

And what noir fest would be complete without an appearance of Elisha Cook, Jr.? Gene Raymond, Wayne Morris and Jeanne Cooper round out the cast; in her discussion with Foster Hirsch, Cooper recalled that Cornfield made the actors really learn the work involved at foundry. He wanted authenticity but also told them wryly: “Now you can back yourselves up and know something more than acting.” Cornfield’s advice on knowing another trade was sadly prophetic – he eventually turned to house painting to support himself. 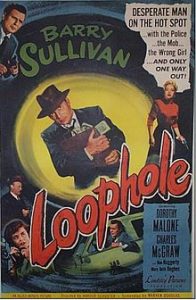 Completing the afternoon was 1954’s “Loophole,” directed by Harold Schuster, much of which was shot on location in Los Angeles, Hollywood and Malibu. It’s a strong example of a noir staple: the wrongly accused and possibly doomed dude. Barry Sullivan is a standup bank teller; Dorothy Malone plays his loyal and devoted wife; Charles McGraw shines as the obnoxious insurance investigator determined to make Sullivan pay for his “crime.”

Another stalwart of noir is amnesia and in “Mirage,” from 1965, we see the topic deftly handled by master noir director Edward Dmytryk (“Murder, My Sweet, 1944; “Crossfire,” 1947). Gregory Peck stars as the afflicted; Walter Matthau plays a newbie gumshoe helping him out; Diane Baker is a mysterious woman from his past. The film also boasts a great collection of villains: Kevin McCarthy, Jack Weston, Leif Erickson, Walter Abel and George Kennedy.

Dmytryk effortlessly balances suspense with humor and there are many funny moments, such as when Peck tells Matthau, “Wouldn’t it be hilarious if you knew what you were doing?” The film is written by Peter Stone, who also wrote “Charade” (1963) and co-wrote “Arabesque” (1966) both by director Stanley Donen, and you can definitely feel the similarities between the three movies.

Eddie Muller and Diane Baker chatted extensively after the movie, with Baker recalling Peck as being full of life with a “great sense of humor and great energy.”

On learning about filmmaking Lloyd said: “When I came to Hollywood, I didn’t know the front end of the camera from the back. I was very nosy and Mr. Hitchcock was delighted to answer my questions. It happened by my talking a lot.”

On Hitchcock dealing with actors? “Hitchcock worked with a major star who had been trained in the Stanislavski method. Hitchcock directed him to sit and the star asked, ‘Why do I sit?’ Hitchcock replied, ‘To put your ass in the seat of the chair.”

And in case any viewers were flagging after four days of viewing, there was sustenance to be found in, as Rode put it, the “take-no-prisoners femme fatale” – none other than Joan Crawford in “The Damned Don’t Cry.” The film is loosely based on the real-life story of Virginia Hill, mistress of gangster Bugsy Siegel, and it’s a joy to watch Crawford savagely claw her way to the top of a national crime syndicate, breaking heart after heart and stubbing out cig after cig as she climbs. 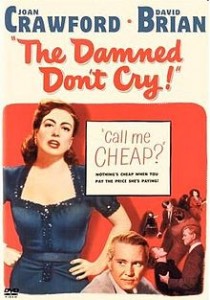 I love this line from Crawford’s character Ethel Whitehead: “Don’t talk to me about self-respect. That’s something you tell yourself you got when you got nothing else.”

Watching Crawford was a terrific way to wrap up the fest and I was a bit sad to say goodbye. I think Eddie Muller summed it up best said when he introduced “Mirage” on Saturday night, telling the packed theater, “The best part of every noir is when the woman gets the gun in her hand.”

It’s been so hot and sunny this week, I’m in definite need of some cool darkness and poolside lounging. For me, that will come next week in the form of the 11th annual Arthur Lyons Film Noir Festival in Palm Springs. The fest runs May 12-15. I like the fact that when I was calling for info on accommodation, I was told repeatedly, “This is a desert town, of course we have a pool.”

Along with “an eclectic mixture of landmark and obscure vintage movies from the classic film noir era,” the festival will host a number of special appearances, such as actress Stefanie Powers, a star (along with Lee Remick, Glenn Ford and Ross Martin) of the opening night film “Experiment in Terror” from 1962, directed by Blake Edwards.

Now I just need to come up with a few ensembles that qualify as desert chic. 😉