The Noir File: Lee Marvin is a thief betrayed in ‘Point Blank’

“Point Blank” (1967, John Boorman). Thursday, Jan. 31, 2:45 a.m. (11:45 p.m.) “Point Blank,” with Lee Marvin as a thief betrayed and left for dead in Alcatraz, is, like “Chinatown,” one of the quintessential neo-noirs. Directed with sizzle and panache by John Boorman (“Deliverance”), the movie’s source is one of the super-tough Parker novels by Donald Westlake, with the main character’s name changed to “Walker.” (It’s changed back in the current, and disappointing, movie adaptation, “Parker,” starring Jason Statham and Jennifer Lopez, directed by Taylor Hackford.)

When the unstoppable Walker, his face deadly and determined, takes off after his treacherous old associates (including John Vernon, Carroll O’Connor and Lloyd Bochner) with the help of a mysterious guide (Keenan Wynn), and a glamorous pal (Angie Dickinson), it’s a magnetic, terrifying sight.

“Point Blank” steeps you in its L. A. locale: a surprisingly beautiful sunlit vision circa 1967. With Boorman going all out, this classic movie plays like a grand collaboration among Don Siegel, Alain Resnais and Jean-Pierre Melville. As for Lee Marvin, he’s at the top of his game. So is Angie.

9:45 p.m. (6:45 p.m.): “The Stranger” (1946, Orson Welles). Orson Welles is a post-war Nazi fugitive hiding in a small town, affianced to the lovely but gullible Loretta Young. Edward G. Robinson is the government man on his trail. That cast and this movie’s virtuosic staging and camerawork (by Russell Metty), would make it a gem for almost any other director. For Welles, it’s average, but gripping.

This is a guide to classic film noir on cable TV. All the movies are from the current schedule of Turner Classic Movies (TCM), which broadcasts them uncut and uninterrupted. The times are Eastern Standard and (Pacific Standard). 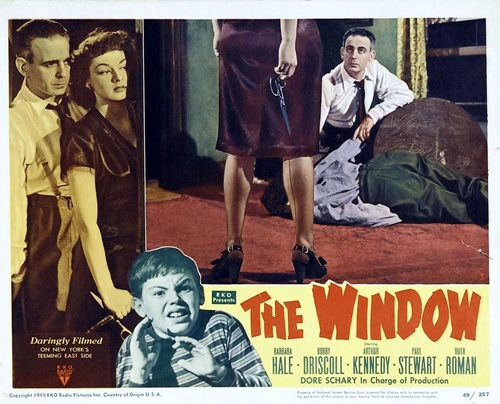 Unfortunately Tommy is known for crying wolf and his parents (Barbara Hale and Arthur Kennedy) don’t believe him. As he keeps trying to tell his story, the killers become more and more aware of the threat he poses and more determined to shut him up.

Of all the great noir writers – Hammett, Chandler, Cain, Goodis, Thompson – no one could generate sheer screaming suspense like pulp-fiction king Cornell Woolrich. And this picture, along with Hitchcock’s 1954 “Rear Window,” are the most tension-packed, unnerving movies made from Woolrich’s stories.

“The Window,” shot largely on location, has grittily evocative street scenery and the cast is letter-perfect. (Driscoll won a special Juvenile Oscar for his performance.) The director was Ted Tetzlaff, an ace cinematographer who shot Hitchcock’s “Notorious,” and he does a wonderful job here.

This movie seethes with atmosphere and character, crackles with fear and dread. There are some classic film noirs that are underrated, and – perhaps because the protagonist here is, atypically, a child – this is one of them. 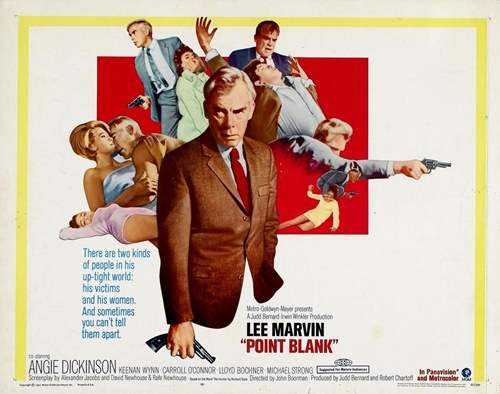 3:30 p.m. (12:30 p.m.): “Point Blank” (1967, John Boorman). “Point Blank” is one of the quintessential neo noirs. Lee Marvin is a thief betrayed and left for dead in Alcatraz. When he takes off after his treacherous associates and their bosses (Carroll O’Connor and Lloyd Bochner), with the help of a mysterious guide (Keenan Wynn) and a glamorous pal (Angie Dickinson), it’s a magnetic, terrifying sight.

Based on a novel by “Richard Stark” (aka Donald Westlake), the movie is steeped in its Los Angeles locale: a deadly city of noir that’s also a surprisingly beautiful sunlit-vision of LA circa 1967. With Boorman going all out, this classic movie plays like a grand collaboration among Don Siegel, Alain Resnais, Phil Karlson and Jean-Pierre Melville. As for Lee Marvin, he’s at the top of his game. So is Angie.

6:15 p.m. (3:15 p.m.): “The Breaking Point” (1950, Michael Curtiz). Based on Hemingway’s “To Have and Have Not,” and starring John Garfield in the Bogie part, this is a more faithful adaptation than the 1944 Howard Hawks picture, but not quite as good a movie. (Then again, some buffs prefer it.) Curtiz gives it speed, atmosphere and a dark overview. The rest of the cast includes Patricia Neal, Phyllis Thaxter and, in the Walter Brennan part, the matchless Juano Hernandez.

French police thrillers, especially the classics by Clouzot, Chabrol and Melville, used to be a bit more plausible and psychologically acute than their American counterparts – explosive action shoot-’em-ups that have mostly tried to knock us on our asses. Not so these days. The French cops-and-robbers hit movie “Point Blank” out-Yanks the Yanks by knocking us on our derrieres in the first few minutes — and then keeps it up, racing like hell on wheels for the next 80.

That’s the good news: It’s an exciting movie. The bad news is that, like many of its U.S. counterparts, it doesn’t make a hell of a lot of sense. The other good news is that writer/director Fred Cavayé’s movie is so well-gunned and goes by so damned fast, you barely notice the holes as you bounce over them.

The plot, jam-packed into the movie’s screamingly fast running time, has to do with a hit man named Hugo Sartet (Roschdy Zem, the somberly magnetic actor of “Days of Glory”) who’s been betrayed and nearly killed. He winds up in the hospital in the custody of the police and the care of a low-key male nurse, Samuel Pierret (the amiable and wonderfully nervous Gilles Lellouche).

Samuel saves Hugo from more would-be assassins and then, to his horror, finds himself trapped between the crooks and the cops – and the crooks who are cops (quite a lot of them, as it turns out). Under the evil command of the Teutonic-looking Commandant Patrick Werner (Gerard Lanvin), who’s actually conducting the investigation of his own crimes, those rogue police start chasing Hugo and Samuel all around Paris.

And, for insurance, they kidnap Samuel‘s beautiful wife Nadia (Elena Anaya), who’s eight months pregnant — threatening her death unless Samuel helps them. Soon Samuel and Hugo have become friends, of a sort, and a large section of Paris has become a bloody battleground.

I told you it didn’t make much sense. And, as I said, it doesn’t really matter. Cavayé, an ex-fashion photographer with a good eye and a blistering sense of pace, also made the big French neo-noir hit “Pour Elle,” which was translated and Americanized into the savagely improbable Russell Crowe thriller “The Next Three Days.” (Hollywood copied it so fast that Cavayé’s French original wasn’t imported and may still pop up here.)

Like Luc Besson and his disciples, Cavayé can do certain high-tech American tricks better than a lot of Americans. How does he get any suspension of disbelief, besides pure speed and kinetic rush? The leads, Zem, Lellouche and Anaya, are all excellent actors (Zem has a great glare) and they bring emotional conviction to a story you can barely believe for a minute.

But whether you call it “Point Blank” or “A Bout Portant” or “The French Reconnection” or “Paris Goes Kaboom,” this is still one totally exciting if often wildly preposterous movie.