This post is part of the For the Love of Film (Noir) Preservation Blogathon, a fundraiser hosted by Ferdy on Films and The Self-Styled Siren to benefit the non-profit Film Noir Foundation; their event last year raised $30,000. I hope you will consider making a donation. If you give, you help save a film: 1950’s “The Sound of Fury” starring Lloyd Bridges and directed by Cy Endfield.

Looking through some photos the other day, I noticed that back in the late 90s, I often lost the fight with my fine, curly hair and just let it go wild (left). Not every day can be a good hair day. If I ever need assurance that every femme fatale has a styling glitch from time to time, I just look at Barbara Stanwyck’s awful wig in “Double Indemnity,” a quintessential noir from 1944, directed by Billy Wilder.

Paramount production head Buddy DeSylva said of the stiff blonde ‘do, “We hired Barbara Stanwyck and here we get George Washington.”

It also reminded me that it had been ages since I’d looked at my copy of “Conversations with Wilder” by Cameron Crowe, published in 1999. The jacket states: “Here, in a Q&A format — a nod to Truffaut’s unforgettable Hitchcock — Billy Wilder, Hollywood’s legendary writer-director, talks to Cameron Crowe, one of today’s best-known writer-directors, about screenwriting and camera work, set design and the stars, his peers and their movies, the old studio system and filmmaking today.

Of course, I flipped right to Wilder’s answer to Crowe’s question about the direction given to Barbara Stanwyck in “Double Indemnity” for the silent shot on her face while the murder is occurring.

Said Wilder: Sure, that was a highly intelligent actress, Miss Stanwyck. I questioned the wig, but it was proper, because it was a phony wig. It was an obviously phony wig. And the anklet — the equipment of a woman, you know, that is married to this kind of man. They scream for murder.

Yeah, naturally we rehearsed this thing. But I rehearsed it with her once or twice, that’s the maximum, and it was not that much different from the way she would have done it. She was just an extraordinary woman. She took the script, loved it, right from the word go, didn’t have the agent come and say, “Look, she’s to play a murderess, she must get more money, because she’s never going to work again.”

With Stanwyck, I had absolutely no difficulties at all. And she knew the script, everybody‘s lines. You could wake her up in the middle of the night and she’d know the scene. Never a fault, never a mistake — just a wonderful brain she had.

Crowe asked if the part had been written for Stanwyck. Wilder said: Yeah. And then there there was an actor by the name of Fred MacMurray at Paramount, and he played comedies. Small dramatic parts, big parts in comedies. I let him read it, and he said, “I can’t do that.” And I said, “Why can’t you?” He said, “It requires acting!” [Laughs.] I said, “Look, you have now arrived in comedy, you’re at a certain point where you either have to stop, or you have to jump over the river and start something new.” He said, “Will you tell me when I’m no good?” [He nods: a partnership is born.] And he was wonderful because it’s odd casting.

Rouge tins and compacts and powder, oh my!

Tonight is part two of my Q&A with writer, social historian and author of the Vintage Powder Room, Joan Renner.
FNB: Where do you find your pieces?
JR: When I first began to collect I could find face powder boxes at flea markets and estate sales, but the Internet has changed that considerably.  I still find items in those places occasionally, but mostly I rely on Internet sites such as eBay and Etsy (and the generosity of friends).
FNB: How were you able to research the original prices and how/where was the makeup typically sold, upon its release?
JR: I’ve used multiple sources to research pieces in my collection.  My favorites are vintage magazines and newspapers.  Via the Los Angeles Public Library I access the Proquest database to view early issues (1880-1980) of the Los Angeles Times online.  Ancestory.com also makes it possible to search vintage newspapers from around the country.
For a peek into the early days of the cosmetics/perfume industry I think that the publication AMERICAN PERFUMER AND ESSENTIAL OIL REVIEW can’t be beat.  I’m fortunate because the Central Branch of the Los Angeles Public Library has a good collection of them.
Then, as now, the pricier brands of makeup would be found at the cosmetics counter of the finer department stores.  Women on a tighter budget could find a wide array of makeup choices at their local drugstore or five and dime.
Many of the early cosmetics companies were regional and either went out of business years ago or they were absorbed by bigger companies.  A few of the largest brands are still in business; for example Coty is over 100 years old and continues to manufacture Airspun face powder in a box designed by Rene Lalique!  The box is festooned with little powder puffs and it is simply gorgeous.  You can purchase it at a drugstore or online for just a few dollars. Amazingly inexpensive for a piece of cosmetics and design history!
FNB: Are any still made today/ have you ever worn or used any of your collection?
JR: I’ve used some of the compacts that I’ve collected, but never any of the cosmetics – that would be way too risky.  Over the years cosmetics have contained some toxic, potentially lethal, ingredients.  Early cosmetics contained a wide variety of nasty ingredients such as lead or arsenic.
FNB: How has the merchandising and marketing of makeup and beauty products changed over the last 60 or so years?
JR: Cosmetics companies still advertise in fashion magazines and other magazines geared toward women, but now you have TV and radio advertising, both mediums were in their infancy 60 years ago.  Surprisingly, even in the early days of makeup, there were celebrity endorsements and the celebrity branding of cosmetics.
During the 1910s and 1920s Mary Garden, a Scottish born opera singer, partnered with Rigaud to offer a line of cosmetics and perfumes using her name and image.  Another woman who would leverage her fame into a line of cosmetics was Edna Wallace Hopper.  Hopper was an actress/singer who would never reveal her age.  She said that her birth records had been destroyed in the 1906 San Francisco earthquake!  She was always described as eternally youthful looking, so that was the hook for her brand of cosmetics and skin care.

She’s got a plan, she just needs a man. And that’s a welcome challenge for a femme fatale, especially one with an ankle bracelet.

For Phyllis, seducing a new guy to help make hubby disappear is so much more cost-effective than hiring a divorce lawyer. A smart insurance man is even better. Along comes Walter Neff (Fred MacMurray) trying to sell a policy, just as Phyllis finishes a session of sunbathing, wearing an ankle bracelet and not much more. That’s about as much bait as Walter needs.

They flirt, fall for each other and eventually arrange to bump off Mr. Dietrichson, making it look like he fell from a train. It’s a one-in-a-million way to go with a huge payoff from a double-indemnity insurance policy issued by Walter’s company. After that, they play it cool and wait for the check. They’ve planned it like a military campaign, so they’re in the clear until Walter starts to suspect that he’s not the only guy who’s been drooling at Phyllis’ ankles.

Besides his lust for the blonde (and their chemistry truly sizzles), Walter’s real love is the platonic father/son relationship he has with his boss at the insurance company, Barton Keyes, sharp, cynical and married to his job, played brilliantly by Edward G. Robinson.

Critic Richard Schickel says “Double Indemnity” is the first true noir. I disagree – what about 1941’s “The Maltese Falcon” and “Stranger on the Third Floor” from 1940? Or even Fritz Lang‘s “M” from Germany in 1931? But the point is “Double Indemnity” was the standard against which every subsequent noir was measured. It’s a glorious treat visually. John Seitz’s luscious lighting and captivating use of shadow bring to mind Vincent Van Gogh’s observation: “There are no less than 80 shades of black.” The score by Miklos Rozsa works perfectly with the visuals to build and sustain atmosphere.

The performances (Stanwyck, MacMurray and Robinson) are tremendous. Though Stanwyck was nominated for the best actress Oscar and “Double Indemnity” was also nominated in six other categories (picture, director, screenplay, cinematography, sound recording and score), MacMurray and Robinson were not in the running and the film didn’t win any Oscars. In retrospect, their work in this movie is some of the best acting of the decade. MacMurray (who might be most familiar as the father in TV’s “My Three Sons”) is such a natural as the easily tempted yet very likeable Neff, it’s surprising now to learn that the role was a major departure from his usual nice-guy parts.

As James Pallot of “The Movie Guide” writes: “Robinson … beautifully gives the film its heart. His speech about death statistics, rattled off at top speed, is one of the film’s highlights.” When Keyes realizes that Walter has betrayed him, it’s heartbreaking in a way that few other noirs are.

Wilder co-wrote the script with Raymond Chandler, based on the taut little novel by James M. Cain, published in 1936. (The novel was inspired by the real-life 1927 Snyder-Gray case.) In the book “Double Indemnity,” smitten Walter says of Phyllis’ physical charms, “I wasn’t the only one that knew about that shape. She knew about it herself, plenty.”

The dark, witty script follows the book pretty closely, but Chandler’s contributions are key. For example, check out this bit of simmering dialogue:

Phyllis: There’s a speed limit in this state, Mr. Neff, 45 miles an hour.

Walter: How fast was I going, Officer?

Walter: Suppose you get down off your motorcycle and give me a ticket.

Phyllis: Suppose I let you off with a warning this time.

Phyllis: Suppose I have to whack you over the knuckles.

Walter: Suppose I bust out crying and put my head on your shoulder.

Phyllis: Suppose you try putting it on my husband’s shoulder.

Walter: That tears it…

Now it seems egregious that Wilder (1906-2002) and “Double Indemnity” were snubbed at the Oscars. Born in what is now Poland, Wilder escaped the Nazis, but his mother and other family members perished in a concentration camp. He knew firsthand the dark, sometimes horrific, side of life and that knowledge imbued his work with an unparalleled richness and depth. He was also hilarious. If I could have martinis with any film noir director, living or dead, it would be Billy.

I’ve seen interview footage of him where he punctuated his conversation with deep and frequent laughter. And I’ve heard stories about him playing practical jokes – apparently he when he lost the 1944 best director Oscar to Leo McCarey (who won for “Going My Way” starring Bing Crosby) Billy stuck out his foot and tripped McCarey as he walked down the aisle to pick it up. Maybe if I get that fantasy date with the spirit of Billy, I’ll bring Dick Schickel along too. He might benefit from a girly martini and tagging along with Billy and me.

So, suppose you do yourself a favor and watch “Double Indemnity” the first chance you get. You won’t be sorry. 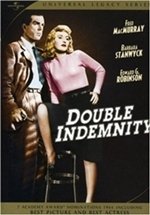 A hands-down noir favorite. Fred MacMurray and Barbara Stanwyck are adulterous lovers who plot to get rid of Stanwyck’s husband in a seamless “accident” and pounce on his insurance policy. Knock-out performances and marvelous direction from Billy Wilder. Based on a James M. Cain novel, the script, by Wilder and Raymond Chandler, crackles with wit and innuendo.