‘The Long Goodbye’ is a highlight of Altman at the Aero

On Friday, March 20, the Aero Theatre in Santa Monica will present “The Long Goodbye” (1973, Robert Altman) as part of a weekend tribute to this stellar director. This event is free to all current American Cinematheque members, with regular pricing for non-members. There will be an introduction by Kathryn Altman, who will sign her book Altman in the lobby at 6:30 p.m. The movie is at 7:30 p.m.

One of the best films of the ’70s or an ugly, boring travesty of a well respected detective novel?

Decide for yourself as you watch Robert Altman’s 1973 movie of “The Long Goodbye,” by Raymond Chandler. The film, starring Elliott Gould as private investigator Philip Marlowe, divided critics, earning the above-mentioned rave from Time Out and the snooty slam from Leslie Halliwell.

It was primarily Gould’s free-wheeling interpretation of the beloved PI that drew ire. Charles Champlin called him an “untidy, unshaven, semi-literate dimwit slob.”

An entertaining yarn, soaked in ’70s atmosphere, the movie captures the sunny, scruffy, solipsistic mood and look of Malibu, Calif., at the start of the Me Decade. Marlowe’s next door neighbors, for example, are pot-brownie-baking, clothing-optional candlemakers. We only see them from a distance but in a way they are timeless party girls, a ’70s version of “The Girls Next Door.”

And “The Long Goodbye” stretches the vocabulary of film noir. As Foster Hirsch, author of “Detours and Lost Highways: A Map of Neo Noir,” writes: “For all its self-indulgence and contradiction – the film both satirizes and seeks acceptance as a cool, contemporary L.A. mystery story – Altman’s ‘new age’ noir suggested the genre’s elasticity at a time when it was considered passé. Produced before nouveau noir had taken root, ‘The Long Goodbye’ anticipates the full-force genre revival of the 1980s and 1990s.”

We meet Marlowe late one night as he’s trying to round up food for his hungry cat (Morris the Cat in the role that launched him to stardom). The story spices up when Marlowe’s friend Terry Lennox (Jim Bouton) asks him, after a marital spat, to drive him to Tijuana.

Marlowe doesn’t have much else going on (besides cat care, of course) and so they make the trip; Marlowe heads back on his own to find that Lennox’s wife is dead. The police press Marlowe for info on Terry’s whereabouts, hoping that a little jail time will jog his memory (David Carradine plays Marlowe’s cellmate). They ease up after Terry Lennox commits suicide, having first written a letter confessing to the murder.

Marlowe’s not buying the suicide, but turns his attention to a new client. The sun-kissed and sophisticated Eileen Wade (Nina van Pallandt) wants Marlowe to find her missing hubby Roger Wade, a boozy writer, (played by the wonderful Sterling Hayden, a veteran of film noirs like “Asphalt Jungle” and “The Killing”).

Searching for Roger isn’t all that challenging, but Marlowe has his hands full with a visit from psychopathic gangster Marty Augustine (director Mark Rydell) and his hoods (including young Arnold Schwarzenegger). They’re sniffing around for a load of cash that Terry Lennox was supposed to deliver to Mexico. Surprise, surprise, the cash never made it. So the surly, anti-social Marlowe plods on toward the truth, trying not to get any sand on the shag carpets. END_OF_DOCUMENT_TOKEN_TO_BE_REPLACED

Film noir’s feline stars: The cat in ‘The Long Goodbye’

Bio: Chauncey Scratchet, a.k.a. the Hungry Cat in 1973’s “The Long Goodbye,” is pivotal to the story. He is ravenous and if you ignore a such a cat, well, There. Will. Be. Trouble. As in scratched faces and bloody limbs. Or utter abandonment.

It’s 3:00 a.m. and Marlowe has neglected to provide for his companion. So, the groggy gumshoe yawns, scratches his head and lights a cigarette, then heads to the supermarket to get the goods. Next door, Marlowe’s sexy, partygirl neighbors catch him before he leaves and ask him to bring back some brownie mix so next morning they can wake and bake. It’s 1973, after all.

At the store, Marlowe nabs the mix but fails to procure a can of Hungry Cat’s coveted Coury brand (they’re out of it). Marlowe tries to pass off some other, inferior, food, but his pet isn’t desperate enough to eat it. Instead, the cat takes off, in a departure both dramatic and understated, and we never see him again. For the rest of the flick, Marlowe pines away for his furry friend, whining about it to anyone he can.

Ironically, Chauncey Scratchet had such a good experience filming “The Long Goodbye” that he never made another movie. It was his first major role and director Altman let him have complete freedom in interpreting his character. Scratchet discovered that this approach was the exception, not the rule.

Rather than compromise on creative matters, Scratchet gave up film acting and turned to photography, quickly rising to the top of his profession and, through his Hollywood connections, shooting prominent actors, artists and musicians of the decade.

Though no longer involved in movies, he did make guest appearances on “Kojak” and “Columbo” as a special favor to pals Telly Savalas and Peter Falk. He was also friends with Keith Richards and was said to have inspired the song “Before They Make Me Run,” from the 1978 album “Some Girls.” 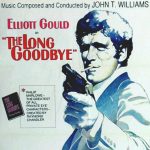 Private eye Philip Marlowe in the age of political protests and pot brownies. Director Robert Altman and lead actor Elliott Gould referred to the famous Raymond Chandler character as Rip van Marlowe, meaning a guy who wakes up from a 20-year sleep, more than a little groggy. Driving a buddy to Tijuana is the first step into a deep pool of confusion and crime. Nina Van Pallandt and Sterling Hayden co-star in this spectacular neo noir.