In “Courted,” writer/director Christian Vincent transports us to the professional and private world of Michel Racine, a fussbudget French judge in the criminal courts. Racine is a memorable characterization, beautifully played by Fabrice Luchini, who received last year’s Best Actor prize at the Venice International Film Festival for this performance. 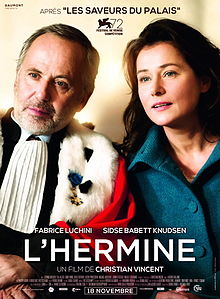 The movie, which almost instantly recalls Sidney Lumet’s courtroom classic, “Twelve Angry Men,” shows Racine presiding over a brutal murder case, in which a 7-month-old child has died. The child’s surly father (Victor Pontecorvo) is the defendant. As the mechanics of the trial unfold, we meet the lawyers, the jury and a key witness, the child’s mother (Candy Ming). The jurors are a chatty bunch and one of them tells the group she has heard through the grapevine that Racine is known around the courthouse for his arrogance.

But he’s also a human being with very human problems. Indeed, it’s a bit jarring to see Racine, at the end of the day, sans his regal ermine robe, ordering soup in the tacky hotel where he lives, a result of his pending divorce.

By coincidence, another juror (Sidse Babett Knudsen), an empathetic Danish-born doctor, has crossed paths with Racine in the past, and this connection plays out as a budding romance.

A novel premise, “Courted” has much to offer – it’s well written and well acted all around. Luchini removes Racine’s pompous, curmudgeonly veneer to reveal his wistful vulnerability. Knudsen shines as the woman who attracts him, a lonely divorced mom who has devoted herself to her kids and career.

Crisply shot and nicely paced, the film’s tonal changes between drama and romcom are gracefully handled. But, at the same time, this mix of genres creates some problems. While it’s fascinating to see the French judicial system at work, shown with some of the same engrossing detail as Lumet’s great films and Dick Wolf’s “Law & Order,” the trial scenes lack the crackling tension that would have completely hooked us voyeurs.

Similarly, there’s a shortage of subtle chemistry between Luchini and Knudsen – both are sympathetic but there is an awkward flatness between them that never lifts. Even if this is intentional, it’s hard to care much about this fledgling couple. There’s a pivotal moment in the trial that would seem to clinch their relationship and oddly that moment is glossed over, a small but significant flaw.

Also strangely lost in the shuffle is any authentic reaction or concern about an unusually dire and depressing murder case. The characters’ jaded detachment is puzzling.

The fact that veteran writer/director Christian Vincent’s point of view remains rigidly superficial limits the film – the merged storylines should pulse with riveting intensity on two fronts, but instead “Courted” retreats disappointingly into bland disengagement. 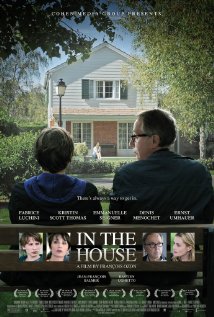 “In the House,” a new thriller by François Ozon, made me think of this quotation from Alfred Hitchcock: “I’m a writer and, therefore, automatically a suspicious character.”

In Ozon’s story-within-a-story film, there are two writers – a 16-year-old student named Claude (Ernst Umhauer), precocious and a bit of a pretty boy, and jaded, middle-aged Germain (Fabrice Luchini). With one poorly received novel under his belt, Germain now teaches in a French high school and struggles to endure his students’ mediocre essays.

But his passion for teaching is reignited when he reads some of Claude’s writing –personal, thoughtful and fresh – and certainly far more promising than the work his classmates produce. Germain shares his enthusiasm with his wife Jeanne (Kristin Scott Thomas) when he brings the assignments home at the end of the day and discusses them with her.

Against his better judgment, Germain encourages and evaluates Claude’s literary efforts, even though he knows it is a risky experiment. Germain lectures him on the process of writing, the purpose of literature. As Claude’s creative muscle builds, the line between reality and fantasy is blurred, and the stakes are gradually, dangerously raised for all the players in this riveting domestic drama.

I am always curious about the work of director-writer François Ozon, perhaps most famous for “Potiche,” “Swimming Pool,” and “8 Women.” He has an easy touch with bold subject matter, a knack for humor (whether deadpan, dark or absurd) and a talent for making well paced, well acted thrillers that reflect his inventive, sometime s cheeky, vision while paying subtle homage to old-school suspense masters like Hitchcock, Henri-Georges Clouzot and Claude Chabrol.

Where Ozon falters slightly with “In the House” is in the movie’s visuals. Perhaps because it’s based on Juan Mayorga’s play, “The Boy in the Last Row,” Ozon’s version feels a bit too theatrical and stagebound. That said, telling the tales are terrific actors (Luchini, Scott Thomas and Seigner in particular). And, driving the suspense, Claude’s true motivation remains intriguingly elusive throughout.

“In the House” opened Friday in New York and LA at the Landmark.