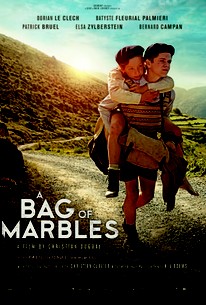 As we sipped champagne and noshed on fare from local French restaurants and food stores, we spotted the stunning and gracious Jacqueline Bisset and shared a hug with her. That made our night!

The festival will screen about 80 films, including classics, shorts, dramas, comedies, documentaries, NeWave 2.0 and a special slate of film noir. The fest also features a considerable offering of acclaimed TV programs and will hold a virtual reality live demo. No matter which movie you select, you will more than likely see a work that is extremely well made with top-notch acting.

Additionally, COLCOA will honor writer-director Stéphane Brizé with a special presentation of “Not Here To Be Loved” (2005) and the festival will host the West Coast premiere of Brizé’s new film “A Woman’s Life,” (Une Vie), based on the Guy de Maupassant novel and starring Judith Chemla.

“Le Cercle Rouge,”  will essentially kick off the film noir lineup on Friday and will be followed by “The Eavesdropper,” an espionage thriller directed and co-written by Thomas Kruithof. It stars François Cluzet as a man with few career options who accepts a mysterious job transcribing tapes of intercepted phone calls.

Additionally, COLCOA will show an international premiere of “Farewell Bonaparte,” a restoration of Youssef Chahine’s 1985 film. “Playtime,” Jacques Tati’s inventive and ambitious 1967 film, will have a special presentation at the festival as will “The Lovers on the Bridge” (1991, Leos Carax). 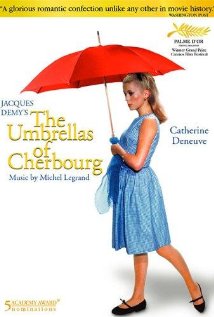 A visual confection. A musical with a vibe both joyful and pensive. Catherine Deneuve’s break-through role. Superb music by Michel Legrand. One of France’s most famous and highly regarded films, “The Umbrellas of Cherbourg” this year celebrates the 50th anniversary of its U.S. release.

Jacques Demy, a New Wave director, brings his distinctive vision to the movie musical resulting in a film that’s wistful and tender, exuberant and operatic. It’s a simple tale of harsh reality intruding on two gorgeous young lovers (Deneuve and Nino Castelnuovo). Demy lends depth and resonance by conjuring a poetic mood and letting the story unfold at a meandering pace.

I imagine that watching Deneuve back in 1964 meant immediately recognizing her star power, perhaps like watching Marilyn Monroe (Deneuve’s favorite actress) in “Gentlemen Prefer Blondes.” For Deneuve’s longtime admirers or those still discovering her, this lovely digital restoration is a must-see treat.

“The Umbrellas of Cherbourg” opens Friday, March 14, at Landmark’s Nuart Theatre, showing through Thursday, March 20, for an exclusive one-week engagement. On March 14, at the 7:30 p.m. show, dance critic Debra Levine will talk with actor/dancer George Chakiris, who worked in collaboration with Demy, Deneuve and Legrand in 1967’s “The Young Girls of Rochefort.” 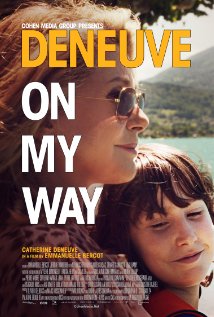 Catherine Deneuve at 70 is just as captivating to watch, maybe more so, as when she was a teenager. Her natural elegance infuses “On My Way,” a road movie in which she plays Bettie, a provincial French restaurateur and long-ago beauty-pageant queen trying to recover after she is jilted by her lover.

Or as director/co-writer Emmanuelle Bercot says: “It is the story of a woman who goes out for a drive and repeatedly finds reasons not to go back home.” One thing that sidetracks her is the fact that her grandson (Nemo Schiffman) happens to needs a ride to the home of his paternal grandfather (Gérard Garouste). Bettie agrees to drive him, though she is not on particularly good terms with the boy or his mother (the singer Camille).

The film feels realistic (an oafish fellow traveler calls Bettie a dog) and sometimes implausible (there are a few plot holes to be overlooked). It’s also very charming (the cast includes many non-actors such as Garouste as well as a porcine farmer, who rolls a cigarette for Bettie as he tells her why he never married) and very French (a leisurely family gathering includes cooking, singing, squabbling, smoking and drinking a nice glass of wine).

With Deneueve in the driver’s seat, “On My Way” is a trip you’ll want to take. 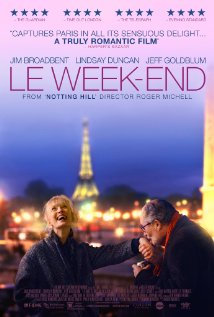 Jeff Goldblum provides a welcome burst of obnoxious energy in the dark(ish) “Le Week-End,” a British comedy/drama set in Paris. Directed by Roger Michell and written by Hanif Kureishi, the film stars Lindsay Duncan and Jim Broadbent as an English couple who spend a few nights in the City of Lights to celebrate their 30th wedding anniversary.

Celebrate, however, is not be quite the right word. The accumulated disappointments and frustrations of their three decades together have yielded a fair amount of friction between domineering Meg and Milquetoast Nick. As Meg points out, love can turn to hate like the flip of a switch. That said, a grudging but abiding affection seeps through Meg and Jim’s disillusioned, resentful exteriors – thanks to graceful acting from Duncan and Broadbent, and seamless direction from Michell.

Goldblum shines as Morgan, a smarmy New Yorker (now living in Paris with a much younger second wife), who knew Nick when they were students at Cambridge. In the years since, Morgan has seemingly achieved the success that has eluded Nick. A chance meeting on the street leads to a rekindling of the friendship.

Though I felt Duncan’s part was somewhat underwritten, “Le Week-End” is a sharp, unvarnished portrayal of a frayed relationship at a turning point in the world’s prettiest city.