In director Michael Curtiz’s 1945 movie version of the book, Joan Crawford won the Oscar for her portrayal of the title role in the ultimate story of a self-sacrificing mother and her ungrateful child, Veda (Ann Blyth). Mildred’s hard-earned success as a restaurateur allows her to support not only her family but also her aristocratic and cash-poor love interest Monty Beragon (Zachary Scott).

In many ways, the series, which follows the book more faithfully than the 1945 movie and covers nearly 10 ten years in the characters’ lives, is a delight to watch. Depression-era Southern California is beautifully recreated and shot by Edward Lachman. Carter Burwell’s original music is spot-on as is Ann Roth’s costume design. And the acting is excellent, particularly the leads.

Whereas Crawford’s Mildred is stoic and dignified, Winslet’s is sensitive, wistful, often tentative and unsure of herself. Her expressive features suggest her mounting anger, guilt and desperation as her business grows but her relationships deteriorate.

Early on in the series, Winslet’s Mildred identifies in her daughter a “pride or nobility I thought I had” and we glimpse the complexity and closeness of her bond with Veda. The mother-daughter relationship in Haynes’ five-hour version is perhaps more nuanced than in Curtiz’s film.

Pearce easily inhabits the playboy scoundrel Monty and Wood sizzles as the junior miss femme fatale. As the story unfolds, we learn that Mildred and Veda also have very similar taste in men. This year’s supporting actress Oscar winner Melissa Leo and Mare Winningham are quite good as Mildred’s friends.

A disappointment, however, is James LeGros’ insipid performance as Pierce family “friend” Wally Burgan. In Curtiz’s version, the role as played by Jack Carson – conniving and sly, but charming – was one of the movie’s many strengths.

Another downside is the pacing, which is far too slow. It would have benefited from shaving about an hour, especially in the beginning. But then if Haynes’ aim was to be true to every page of the book, he has succeeded.

I prefer Curtiz’s original because it is canonical film noir, in tone, look and story. Granted, Cain’s book was altered because in 1940s Hollywood, immorality was never allowed to triumph. Instead of the evil-doers leaving California to begin a new life in New York, one is fatally shot and the other eventually is punished. The murder sets the story, told via flashback, in motion and lends an edgy suspense.

Still, Haynes did not set out to make a noir; apparently his aim is to explore the subtext and subtleties in Cain’s novel. Cain was, arguably, sympathetic toward his feisty protagonist (what choice does she have but to establish independence and security, given the weak and deceitful men she has to choose from?). But she pays a dreadful price for doing so and the book decries materialism, the class system and social climbing. As for Cain’s ultimate take on Mildred’s power, in Hayne’s work, there is fodder for both sides of the argument.

On the radar: HBO’s ‘Mildred Pierce’ premiere in New York, the launch of ‘Parisian Chic,’ and an of-the-moment site

Kate Winslet and Guy Pearce walked the red carpet Monday night in New York at the premiere for HBO’s “Mildred Pierce,” directed by Todd Haynes and based on James M. Cain’s novel. The mini-series starts Sunday. The 1945 movie version of the book stars Joan Crawford in the title role.

Look book: Magazine illustrator, Roger Vivier consultant and former Chanel model Inès de la Fressange shares her style secrets in “Parisian Chic” out next month. In addition to fashion pointers, the book includes tips on living well, 70 pages of her favorite places to go in Paris as well as ideas for entertaining at home, and who does that better than the French?

A sample de la Fressange maxim: “A true Parisian is not looking to snag a billionaire husband. She is uninterested in spending for its own sake and sporting the labels to show for it.”

Life is good (and glitzy) in 1953 Los Angeles, if you don’t mind smoke and mirrors, hidden crime, rampant racism and more than a few dodgy cops. Corruption in the police force, long an undercurrent in classic noir, takes center stage in “L.A. Confidential,” a wry, stylish and devastating police drama directed by Curtis Hanson.

Hanson sets the tone of glib optimism masking darker secrets by opening the movie with shots of bright and cheerful ’50s postcards, the song “Accentuate the Positive (Eliminate the Negative)” and a Danny DeVito voiceover filling us in on some of the trouble that lurks in paradise.

The sophisticated script, by Hanson and Brian Helgeland, is based on the 1990 novel by James Ellroy, which cleverly weaves in actual Hollywood history while telling the see-speak-and-hear-all-evil story of three cops:

*The jaded and jazzy Det. Sgt. Jack Vincennes (played by Kevin Spacey with a nod to Dean Martin) who pads his bank account by consulting for a TV police show (“Badge of Honor”) and feeding juicy info to “Hush Hush” tabloid columnist Sid Hudgeons (Danny DeVito). Sid meets looming deadlines with set-ups, celebrity exposés and the odd blackmail scheme. (“Hush Hush” magazine is based on the ’50s scandal mag “Confidential” and “Badge of Honor” is based on TV’s “Dragnet.”)

*Det. Lt. Edmund Jennings ‘Ed’ Exley (Guy Pearce), an ambitious newbie with a gift for finessing police politics. Exley wants to make his Dad proud, follows a strict moral code and doesn’t care about being one of the guys. And he won’t be, given that he testifies against his fellow cops and their part in “Bloody Christmas,” a true incident of LA cops beating up Mexican prisoners.

*Officer Wendell ‘Bud’ White (Russell Crowe), a thuggish beefcake who likes to take justice into his own hands, especially when it comes to violence against women. “His blood’s always up,” Exley says of White.

Presiding over the entire force and clashing with Exley in particular is Capt. Dudley Smith (James Cromwell), arrogant but understated until his latent psychopath rears his head.

“Bloody Christmas” is a mere prelude to a detailed catalog of vice and sin, as the story deepens and stretches to accommodate layer after layer of lies, double-dealing, betrayal and cover-up. Funny what can happen when mob leader and “honest haberdasher” Mickey Cohen (Paul Guilfoyle) — a real-life criminal — is getting a time-out in jail.

Central to the tangle is the Nite Owl case, involving kidnapping, rape, robbery and murder, which of course is not what it looks like. White’s ex-partner Dick Stensland (Graham Beckel) was among the bodies found in a dumpy diner, and, in pretty short order, three African-American guys with records end up taking the fall.

Additionally, the three cops find out about an upscale call-girl service, run by the suave, slick and urbane Pierce Patchett (David Strathairn). Patchett’s gimmick: All the girls resemble popular actresses — or they do after a few trips to a plastic surgeon. For instance, there’s a Veronica Lake look-alike named Lynn Bracken (Kim Basinger). Sure enough, such a business did apparently exist in ’50s Tinseltown, as recounted in Garson Kanin’s memoir “Hollywood.”

Bud White proves to be both smart and strong as he asks the tough questions and finds their well-guarded answers, one in the form of a rotten, rat-infested corpse who turns out to be a fellow cop. Shocker!

More storylines surface, such as the romance between Bud and good-hearted golden-girl Lynn, not to be confused with Veronica Lake. (Btw, the Lana Turner mixup scene is a hoot!) And as is the case in noir, it’s not long before Exley meets Lynn and creates a triangle of treachery. As the threads of the story unravel, and we see more darkness and deceit, deadly shoot-outs and bloody dust-ups, it’s clear that all strands lead back to a central source of evil. Hanson and Helgeland, courtesy of Ellroy, tell a tense, crisply paced, funny and chilling story nestled in a near-perfectly rendered world of sun-drenched, sleazy LA.

Hanson’s film stands up beautifully and certainly holds its own among the great neo-noir movies, in the tradition of “Chinatown” and “Body Heat.” Kenneth Turan of the Los Angeles Times sums up the appeal this way: “Its intricate plot is so nihilistic and cold around the heart, its nominal heroes so amoral, so willing to sell out anyone and everyone, that the film is as initially unnerving as it is finally irresistible.”

That said, there are several snags on the accuracy front. END_OF_DOCUMENT_TOKEN_TO_BE_REPLACED 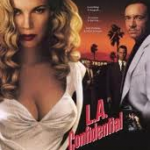 I saw “Mildred Pierce” for the first time nearly 20 years ago on a Sunday afternoon in my small, studenty London flat – pale gray walls, Venetian blinds, a Victor Skrebneski print opposite the TV.

Just before the opening scene unfolded – a shooting in a shadow-drenched California beach house with a sinister vibe – I remember popping a batch of popcorn in oil on the stovetop and making American lemonade (fresh lemons, sugar and water). Such wholesome snacking for the decadence on the little screen.

Hubby Bert Pierce (Bruce Bennett) doesn’t think Veda is worth it and they break up over Mildred’s intense maternal devotion. Some subtexters theorize that Mildred’s love has romantic overtones; I don’t think there’s a strong case for that.

Mildred works as a pie-baker and a waitress, then opens a chain of restaurants to pay for Veda’s clothes, music lessons and extravagant taste. Problem is, nothing’s ever good enough for the Everest-level high-maintenance Veda. “I can’t wear that rag,” she snarls, upon seeing a dress Mildred bought for her.

Besides sniping at loved ones and spending their money, Veda enjoys hatching blackmail plans and singing in sleazy nightclubs. So it’s no shocker that she also has designs on Mildred’s new love interest Monte Beragon (Zachary Scott). Monte is an aristocratic playboy who’s always short of cash but really rather useful for Veda’s plan to become patrician.

No matter what, Veda sinks her serpent’s teeth deeper and deeper into Mildred’s flesh, which, by the way, at 40, was still very shapely. Curtiz wisely gives Crawford plenty of opps to show off her gams. And her little hats, tailored suits and ankle straps are the picture of retro chic. END_OF_DOCUMENT_TOKEN_TO_BE_REPLACED