Set in 1949, the film introduces us to a choice cast of characters. Top of the list is introspective and blasé Ed Crane (Billy Bob Thornton), who has fallen into a comfortable, if dull, life in Santa Rosa, Calif. He’s fond of his wife Doris (Frances McDormand), both cynical and oddly sweet, but there’s never been any passion between them.

To earn a living, Ed cuts hair with his brother-in-law Frank (Michael Badalucco) at the family barbershop. (“I don’t talk much,” Ed tells us. “I just cut the hair.”) Doris is a bookkeeper at Nirdlinger’s, the town’s big department store, and together they have it “made” – after all, Ed points out dryly, they have a garbage grinder built into the sink.

When he’s not working or tossing scraps down their fancy drain, Ed kills time mainly by smoking and taking care of Doris after she’s had too much to drink, which is quite often. Doris passes the hours of their lives by playing bingo and having an affair with her boss at Nirdlinger’s, Big Dave Brewster (James Gandolfini), a blustery WW2 vet. Dave’s married to Ann Nirdlinger (Katherine Borowitz), whose family owns the store. Ed knows about the affair but, as he does with everything, takes it in stride.

Ed’s life changes forever the day that unctuous big-mouth businessman Creighton Tolliver (Jon Polito) walks into the barbershop as it’s about to close, gets a very quick trim and happens to mention that he’s in town trying to raise money to invest in drycleaning, which he’s convinced is “the biggest business opportunity since Henry Ford.”

Ed decides later that night that he wants in on the putative drycleaning empire and figures he can raise the requisite $10,000 by anonymously blackmailing Dave. No sooner does Ed get the cash than Tolliver takes off with it. And because Tolliver is so quick to bend ears and beg for money, Dave gets to the bottom of the blackmail scheme and intends to get his money back.

What Dave doesn’t count on is that Ed’s mild facade hides nerves of cold steel; when cornered, Ed’s response to him is quick, instinctive and deadly. But, after news breaks of Doris and Dave’s affair, Doris is arrested for Dave’s murder. END_OF_DOCUMENT_TOKEN_TO_BE_REPLACED

Quick hit: ‘The Man Who Wasn’t There’ 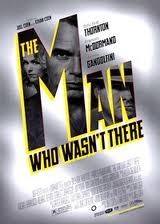