A music-hall singer in need of new material (Linda Darnell) charms a mild-mannered composer (Laird Cregar) into service. Service that includes him taking care of her cat, natch. But there’s a catch, of course. If he works too hard, he blacks out and can’t remember a damn thing the next day. There’s definitely trouble in paradise for this pair. John Brahm directs; based on a Patrick Hamilton novel.

Veronica Lake, Alan Ladd are smokin’ in ‘This Gun for Hire’

Tuttle easily balances moody suspense, wholesome romance, patriotic duty and the not-quite-jaded vibe of young performers trying to earn a living at a nightclub. Cinematographer John Seitz (of “Double Indemnity”) lends his elegant eye to the lighting; the scenes of Ladd and Lake on the train and on the run are especially beautiful. Crisp dialogue comes from writers Albert Maltz and W.R. Burnett, a Midwesterner whose stint as a night clerk in a Chicago hotel inspired the 1929 crime novel (and the 1931 film) “Little Caesar” as well as many other novels and screenplays.

Unrepentant and casual about killing for a living, Ladd’s performance is classic noir; it influenced Jean-Pierre Melville’s “Le Samourai” from 1967. Unlike most femme fatales, Ellen Graham isn’t motivated by money or revenge but by doing her part for the war effort. Still, Lake gives us bemused detachment and a glimmer of tenderness; she also helps humanize Raven. And how could you not love her musical numbers and surprisingly modern costumes, especially the sleek black “fishing” garb with thigh-high boots? END_OF_DOCUMENT_TOKEN_TO_BE_REPLACED

‘This Gun for Hire’ quick hit 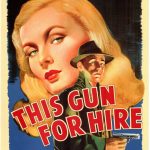 This role hardly qualifies Veronica Lake as a femme fatale. She’s loyal to her man, works for a living and helps out Uncle Sam. Shocker! That said, this movie is still full-on noir and Lake, who blazes a trail with hitman Alan Ladd, completely captivates. Laird Cregar delights, as always, as the peppermint-popping heavy. Based on a Graham Greene novel; directed by Frank Tuttle.