Film Noir File: Sit back and enjoy a night with Bogie & Bacall

The Film Noir File is FNB’s guide to classic film noir, neo-noir and pre-noir on Turner Classi  c Movies (TCM). The times are Eastern Standard and (Pacific Standard). All films without a new review have been covered previously in Mr E Man and can be searched in the FNB archives (at right).

Pick of the Week: Bogie and Bacall night is Tuesday, April 7

Humphrey Bogart and Lauren Bacall – the King and Queen of film noir – make for a royally cool evening. First: A documentary-memoir by Bacall, followed by two of the nonpareil pair’s top shows, adapted from books by Ernest Hemingway and David Goodis. Sit back, pour yourself a cold one, and enjoy. And remember: Another vintage Bogart, “Casablanca,” plays (again Sam), Tuesday morning on TCM. (See below.)

8 p.m. (5 p.m.): “Witness for the Prosecution” (Billy Wilder, 1957). “Witness for the Prosecution” (1957, Billy Wilder) From the famous Agatha Christie short story, Billy Wilder expertly fashions one of the screen’s trickiest trial-drama/murder mysteries – with Charles Laughton as the wily, wheelchair-bound barrister, his real-life wife Elsa Lanchester as his long-suffering nurse, and Tyrone Power and Marlene Dietrich as the incendiary couple caught up in a legendary triple-reverse surprise ending.

12 a.m. (9 p.m.): “Klute” (Alan Pakula, 1971). Jane Fonda as a brainy hooker (her first Oscar-winning performance) being pursued by a psycho killer. Donald Sutherland plays Klute, the cop who tries to help and save her. A classy, first-class neo-noir.

Gangster Raymond Burr and overripe actor Vincent Price are our kind of heavies in this breezy, funny tongue-in-cheek noir.

See Pick of the Week above.

2 p.m. (11 a.m.): “Bunny Lake Is Missing” (Otto Preminger, 1965). Bunny Lake is an American child kidnapped in London, Carol Lynley her terrified mother, Keir Dullea her concerned uncle, Anna Massey her harassed teacher, Noel Coward her sleazy landlord, and Laurence Olivier the shrewd police detective trying to put the pieces of the puzzle together. The most important of those pieces: Was Bunny ever really there at all? A neglected gem; based on Evelyn Piper’s novel.

This free screening is part of WeHo Reads, a noir-themed month-long literary program. On Saturday, Sept. 27, there will be a day of panels, music and film. 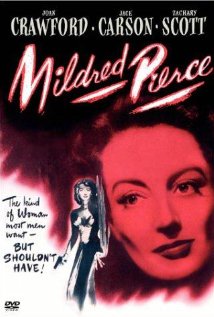 I saw “Mildred Pierce” for the first time nearly 20 years ago on a Sunday afternoon in my small, studenty London flat – pale gray walls, Venetian blinds, a Victor Skrebneski print opposite the TV. Just before the opening scene unfolded – a shooting in a shadow-drenched California beach house with a sinister vibe – I remember popping a batch of popcorn in oil on the stovetop and making fresh lemonade. Such wholesome snacking for the decadence on the little screen.

3 p.m. (12 p.m.): “Brute Force” (1947, Jules Dassin). One of the prototypical prison pictures, with Burt Lancaster as the indomitable convict and Hume Cronyn as the sadistic captain – plus a cast that includes Yvonne De Carlo, Charles Bickford, Ann Blyth and Howard Duff, and a taut script by Richard Brooks.