Film Noir File: Kazan taps TV’s evil in ‘A Face in the Crowd’

Three years after they collaborated on the great noir “On the Waterfront,” screenwriter Budd Schulberg and director Elia Kazan joined forces brilliantly again, on another classic noirish drama: “A Face in the Crowd.”

Not as famous or as influential as Waterfront, Face is nevertheless another American masterpiece. Thanks to Kazan and Schulberg it had another gutsy, gut-punching script, a similar sense of life in all its intensity and complexity, and another very strong (if not quite as remarkable) cast: Patricia Neal, Walter Matthau, Anthony Franciosa, Lee Remick, Kay Medford, Burl Ives, Mike Wallace, Walter Winchell.

As for Griffith, he was as essential to “Face in the Crowd” as Marlon Brando was to “On the Waterfront.” There were few movie and TV actors more specifically, joyously American back in the ’50s and ’60s than Andy Griffith, a hugely talented small-town North Carolina guy who could so aptly play both good men and bad.

And as Lonesome Rhodes, he gives an explosive, mesmerizing rendition of pure guile and homespun brutality. 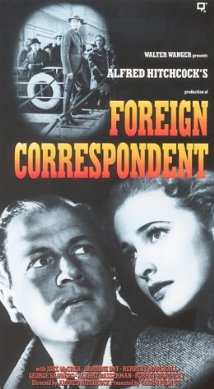 10:15 p.m. (7:15 p.m.): “Contraband” (1940, Michael Powell). A Danish ship captain (Conrad Veidt) and a British beauty (Valerie Hobson) get mixed up in spy high jinx at the onset of World War II. Masterminded by Powell and writer Emeric Pressburger, who would make some of the most offbeat movie masterpieces of the World War II era.

12 a.m. (9 p.m.): “Above Suspicion” (1943, Richard Thorpe). This glamorous MGM chase thriller sends Joan Crawford and Fred MacMurray (a pretty odd couple) on a honeymoon in terror, with villainous Nazis (including Conrad Veidt, of “Casablanca” fame) as their tour guides. Crawford shines off-type as a smart and loyal wife.

6 a.m. (3 a.m.): “Intruder in the Dust” (1949, Clarence Brown). A stately, graceful adaptation of the Mississippi murder mystery by William Faulkner, in which a brave boy (Claude Jarman, Jr.) helps a stubborn, heroic old black man stand up to a lynch mob. A very atypical film for the elegant metteur-en-scene Clarence Brown, Greta Garbo’s most frequent director. But it’s probably the best film he ever made.

8 p.m. (5 p.m.): “The Defiant Ones” (1958, Stanley Kramer). Sidney Poitier and Tony Curtis as escaped chain gang prisoners, shackled together and on the run, in the most Stanley Kramerish of all Stanley Kramer pictures.

4:15 a.m. (1:15 a.m.): “Edge of the City” (1957, Martin Ritt). With John Cassavetes, Sidney Poitier, Jack Warden and Ruby Dee. Brilliant acting – pitched in an “On the Waterfront” key and set in the same kind of grim dockside milieu – stands out in this tough yet humane film.

Director, producer, writer and actor Spike Lee, guest programming for TCM, has selected four excellent films, all of which have strong film-noir elements and social/political themes. The movies will play at various times this month, starting on Thursday, July 5.

“Ace in the Hole” (1951, Billy Wilder) Kirk Douglas stars as a sleazy reporter who will go to any length to restart his career.

“On the Waterfront” (1954, Elia Kazan) A washed-up boxer and mob member (Marlon Brando) tries to redeem himself when he falls in love with a victim of the mob (Eva Marie Saint).

“A Face in the Crowd” (1957, Elia Kazan) The unlikely rise of a brutal drifter (Andy Griffith) to a media/TV sensation is set against the background of the South in the 1950s. Also stars Patricia Neal and Walter Matthau.

Meanwhile, a very happy Fourth of July to everyone!