WWJD? Taking a leaf, or not, from Joan Crawford’s book

‘Possessed’ will play at the Arthur Lyons Film Noir Festival in Palm Springs, which starts on Thursday, May 10, and runs through the weekend.

WWJD? What Would Joan Do is an acronym I use to remind myself that in times of trial, or just dreary old doubt, I can always conjure some outrageous guidance in the spirit of the indomitable Miss Joan Crawford.

“You see?” Joan would purr in her low, silky voice, were she still alive. “It sounds severe, but it’s really rather effective.”

Work woes? If you’ve patiently kept your nose to the grindstone and still haven’t received a promotion, it might be time to march into the boardroom and shout: “Don’t mess with me, fellas!”

Slovenly roommate? Never underestimate the effect of throwing a few hangers around to drive home the point that the apartment is not likely to start cleaning itself.

Man trouble? A quick jab with your stiletto to his foot or chin every 10 minutes or so should ensure that the rapscallion not only listens but also hangs on your every word over dinner.

Admittedly, actually doing any of the above or generally taking cues from the Queen of the Ankle-Strap Shoe would likely lead to disastrous results. But the point is that imagining WWJD is nearly as entertaining as watching the many movies in which she played tough strong women who made up their minds to go after what they wanted. And. Didn’t. Stop. Until. They. Got. It.

Getting what she wants is certainly central to her character in director Curtis Bernhardt’s “Possessed” from 1947. Joan plays Louise Howell Graham, a determined gal who doesn’t take it very well when her boyfriend David Sutton (Van Heflin) dumps her. Louise is convinced that if she tries hard enough, David will come to his senses and realize that he does love her, after all.

She even marries wealthy widower Dean Graham (Raymond Massey) as a ploy to win David back. (Need I say the ploy doesn’t work?) When Louise’s stepdaughter Carol (Geraldine Brooks) also falls for David, things get sticky. Or perhaps shaky is a better word because Louise goes off the deep end into a full-fledged psychotic state, though when she eventually pulls the trigger of a gun, her hand is rock steady.

You realize in the opening scene that Louise is in La La Land, literally and figuratively, as she wanders the streets of LA calling David’s name. In a drab dress, hideous shoes, no lipstick and her hair a mess? She needs new medication or an emergency shopping trip to Rodeo Drive. Someone help this woman, please! And mercifully someone does. Louise’s story comes to us in flashback as she tells her doctors in the hospital psycho ward.

The movie is director Bernhardt’s exploration of an unhinged mind. A German Jew well-schooled in the tenets of Expressionism, his visual techniques to show us Louise’s inner torment include high-contrast light and shadow as well as stunningly extreme camera angles to create a sense of emotional chaos.

Crowded, asymmetric compositions reveal her sense of entrapment and imbalance. Particularly famous, and beautifully lit, is Louise’s disaster-fantasy scene where she confronts Carol near a flight of stairs – essentially a distorted dream sequence that reflects Louise’s anguish. Joseph Valentine and Sidney Hickox (uncredited) were the cinematographers.

The intense script came from Ranald MacDougall, Silvia Richards and Lawrence Menkin; it was based on a Rita Weiman story. MacDougall was a favorite of Joan’s. He was the lead writer of “Mildred Pierce” (1945, Michael Curtiz) based on James M. Cain’s novel. MacDougall also adapted and directed 1955’s “Queen Bee.”

It’s Joan’s movie, to be sure, but there’s a terrific chemistry among these well cast players. Heflin plays a douche bag like no other, Massey fairly radiates standup sincerity and goodness, and Brooks shines as his sweet and sexy daughter.

By today’s standards, Joan’s acting is a little over the top, but it’s hard to think of another actress who could’ve pulled off this part (it’s a crazy lady, after all) any better. As James Agee sagely noted, “Miss Crawford performs with the passion and intelligence of an actress who is not content with just one Oscar.”

Her performance in “Possessed” was nominated for a best-actress Oscar but, having won for “Mildred Pierce,” her chances were slim; she lost to Loretta Young in “The Farmer’s Daughter.” (She was also nominated for “Sudden Fear,” from 1952, but the award went to Shirley Booth in “Come Back, Little Sheba.”)

The genius of Joan is that she while she might’ve overplayed it a tad, she always retained a sense of dignity and backbone that made you admire her a little, even if she was nuts. My favorite scene is when hubby Dean asks her why she lied to him. She answers, in a blasé tone, “Because I felt like it. I wanted to lie and I lied. Let me alone.”

This reminds me of a story my mother told me once. She and her best friend, both newly married, attended a bridal shower where the guests were asked to write down a piece of advice for a happy marriage. The two of them suggested the following: “Tell one lie every day.” When it came time to read each item aloud, the other guests were aghast at this exhortation to fib. Still, my mother and her friend got quite a good chuckle out of it.

I think Joan would have too. 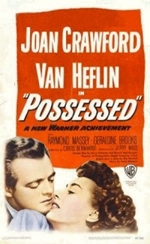 “I wanted to lie and I lied,” says a detached and matter-of-fact Louise Howell Graham (Joan Crawford) to her rich hubby (Raymond Massey). In addition to lying, Louise is obsessing over an old boyfriend, an engineer named David Sutton (Van Heflin), to the point of going full-on crazy. Too bad David’s eye is on Louise’s stepdaughter (Geraldine Brooks). This choice line is one of many pleasures in this well acted and well crafted film by director Curtis Bernhardt; Ranald MacDougall wrote the script.

Earlier today at a round-table interview, I caught up with TCM’s Robert Osborne, a veteran film historian and author, as the Classic Film Festival was setting up at the Roosevelt Hotel in Hollywood. Osborne said one of the festival’s strengths is its great mix in terms of programming, which sets it apart from today’s moviegoing where “you have a choice of the same movie 15 different ways.”

I’ve always wanted to talk noir with him, so I asked him why these films have such enduring appeal. “We’ve always had murder mysteries and who doesn’t love that? They have an endless appeal. It’s the shadows and lights and tough people like Robert Mitchum, Robert Ryan and Ida Lupino.

“My idea of film noir is people in the gutter – tough dames and guys in trench coats up to no good. And nobody did it better than Hollywood in the ’40s.”

As for his favorite femmes fatales, he names Veronica Lake, Lauren Bacall (in the Bogart films), Marie Windsor and Jane Greer, describing them “as very feminine women that were also dames who could give it as well as they took it.”

And what did he think of remakes such as HBO’s version of “Mildred Pierce” by director Todd Haynes, starring Kate Winslet? Osborne praised Winslet’s performance but said he was disappointed. “They told the whole story too closely; it was too long and drawn out and too ponderous. In the original [Michael Curtiz‘s 1945 movie starring Joan Crawford], writer Ranald MacDougall’s addition of the murder really made the whole thing crackle. [The remake] should’ve been three hours at the most. I’m not fond of remakes generally.”

What is he most looking forward to in this year’s fest? “Night Flight” by Clarence Brown, “The Constant Nymph” by Edmund Goulding, opening night’s “An American in Paris” by Vincent Minnelli, Leslie Caron’s special appearance, and meeting Peter O’Toole.

I also asked Osborne, who got his star on the Hollywood Walk of Fame in 2006, if he had any advice for O’Toole who will be honored at a hand and footprint ceremony at Grauman’s Chinese Theatre this Saturday. “Behave!”

I saw “Mildred Pierce” for the first time nearly 20 years ago on a Sunday afternoon in my small, studenty London flat – pale gray walls, Venetian blinds, a Victor Skrebneski print opposite the TV.

Just before the opening scene unfolded – a shooting in a shadow-drenched California beach house with a sinister vibe – I remember popping a batch of popcorn in oil on the stovetop and making American lemonade (fresh lemons, sugar and water). Such wholesome snacking for the decadence on the little screen.

Hubby Bert Pierce (Bruce Bennett) doesn’t think Veda is worth it and they break up over Mildred’s intense maternal devotion. Some subtexters theorize that Mildred’s love has romantic overtones; I don’t think there’s a strong case for that.

Mildred works as a pie-baker and a waitress, then opens a chain of restaurants to pay for Veda’s clothes, music lessons and extravagant taste. Problem is, nothing’s ever good enough for the Everest-level high-maintenance Veda. “I can’t wear that rag,” she snarls, upon seeing a dress Mildred bought for her.

Besides sniping at loved ones and spending their money, Veda enjoys hatching blackmail plans and singing in sleazy nightclubs. So it’s no shocker that she also has designs on Mildred’s new love interest Monte Beragon (Zachary Scott). Monte is an aristocratic playboy who’s always short of cash but really rather useful for Veda’s plan to become patrician.

No matter what, Veda sinks her serpent’s teeth deeper and deeper into Mildred’s flesh, which, by the way, at 40, was still very shapely. Curtiz wisely gives Crawford plenty of opps to show off her gams. And her little hats, tailored suits and ankle straps are the picture of retro chic. END_OF_DOCUMENT_TOKEN_TO_BE_REPLACED