The Noir File: Bogart and Bacall heat up the big screen in Hawks-Chandler noir classic ‘The Big Sleep’ 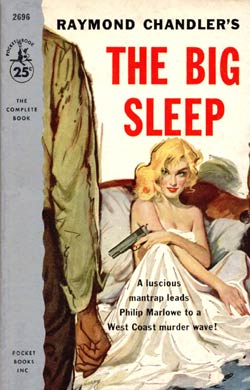 8 p.m. (5 p.m.): Kim Novak: Live from the TCM Classic Film Festival. TCM host Bob Osborne chats with one of Hitchcock’s great blondes, Chicago’s own Kim Novak. Taped at last year’s festival in Hollywood, this one-hour interview special kicks off a tribute night to Novak. After the interview, four of her films will screen: “Bell, Book and Candle” (1958), “Picnic” (1955), “The Man with the Golden Arm” (1955) and “Of Human Bondage” (1964).

7:30 a.m. (4:30 a.m.): “Stage Fright” (1950, Alfred Hitchcock). After he left England to make “Rebecca” in 1940 for David Selznick, Hitchcock returned to make only two more features there: the excellent “Frenzy” in 1972, and “Stage Fright” in 1950. The latter is a backstage theater drama with Jane Wyman as a romantic-minded acting student, who tries to help a man on the run (Richard Todd). He’s accused of murdering the husband of a swooningly beautiful actress (Marlene Dietrich). “Stage Fright” is usually considered one of the lesser Hitchcocks, but second-tier Hitch is still better than most films. The pungent London theatrical settings and fine cast (including Alastair Sim, Sybil Thorndyke and Michael Wilding) keep “Stage Fright” an entertaining slice of Htchcockian cake.