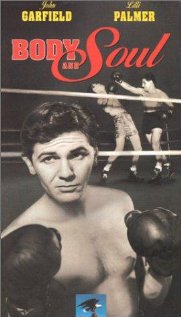 Ed L. is the winner of the September giveaway. (The prize is “The 39 Steps,” recently rereleased by Criterion on DVD and Blu-ray.)

The October giveaway is one of the most famous boxing movies ever made as well as a stellar film noir: “Body and Soul” (1947, Robert Rossen). John Garfield, starring opposite Lilli Palmer, received a Best Actor Oscar nomination as did Abraham Polonsky for his original screenplay. Francis D. Lyon and Robert Parrish won the Oscar for best editing. Shot by two-time Oscar winner James Wong Howe.

To enter this month’s giveaway, just leave a comment on any FNB post from Oct. 1-31. We welcome comments, but please remember that, for the purposes of the giveaway, there is one entry per person, not per comment.

The October winner will be randomly selected at the end of the month and announced in early November. Include your email address in your comment so that I can notify you if you win. Also be sure to check your email – if I don’t hear from you after three attempts, I will choose another winner. Your email will not be shared. Good luck!

Greed at its glossiest in ‘The Strange Love of Martha Ivers’ 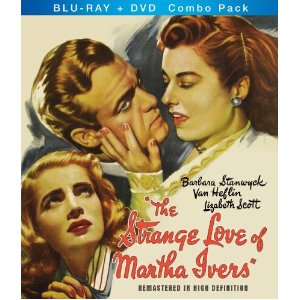 The effects, both corrosive and subtle, of deep-seated greed form the core of “The Strange Love of Martha Ivers,” made for Paramount by prestige director Lewis Milestone. Known primarily for his war films, like the 1930 Oscar-winning classic “All Quiet on the Western Front,” and later for guiding the Rat Packers in the original Ocean’s Eleven (1960), Milestone is equally adept at noir.

In some ways, this darkly melodramatic film is not a typical noir – Martha, the femme fatale, hails from a wealthy, prestigious family that’s made its fortune from the workers of a small industrial burg called Iverstown. We learn about the principal characters’ backgrounds and see Martha (Janis Wilson), Walter (Mickey Kuhn) and Sam (Darryl Hickman) as kids.

Young Martha, fed up with her tyrannical spinster aunt/guardian, is on the verge of running away with Sam. She doesn’t quite make it, though, and one fateful night (need I mention dark and stormy?) the trio’s lives are changed permanently after Martha commits a terrible crime. Sam flees but returns nearly 20 years later, catching Martha’s eye again and making Walter squirm with guilt, which he tries to obliterate by drinking breakfast, lunch and dinner.

But in many ways, “Martha Ivers” is classic noir – a cynical, pessimistic mood; sharp visuals; characters trapped by secrets of the past and burdened with the weight of wrongdoing; love warped by a thirst for money and power. That said, not all is bleak – screenwriter Robert Rossen (“The Hustler”) provides a crackling good script with a sly twist, Edith Head designed the costumes, Miklós Rózsa wrote the score, the ideally cast actors nail their parts and there’s an upbeat ending. (Also, watch for Blake Edwards, uncredited, as a sailor/hitchhiker.)

Every time I think I’ve found Heflin’s best performance, I see him in another movie and change my mind – for the next week or so this is my fave. Could anyone else but Heflin deliver a line like: “It’s the perfume I use that makes me smell so nice” and have it work so perfectly?

As a smalltime gambler who lives by his wits, Heflin’s Sam brims with swagger and sweet talk. Stanwyck’s Martha is more than up to the challenge of loving him. Douglas is supremely convincing in a difficult, textured role; Scott brings a sexy warmth and vulnerability to this girl who can’t seem to get a break.

And I particularly enjoyed the cherchez le femme element: setting all the evil into motion is little Martha’s beloved pet, a kitten named Bundles.

“The Strange Love of Martha Ivers” was recently released on Blu-ray by HD Cinema Classics.