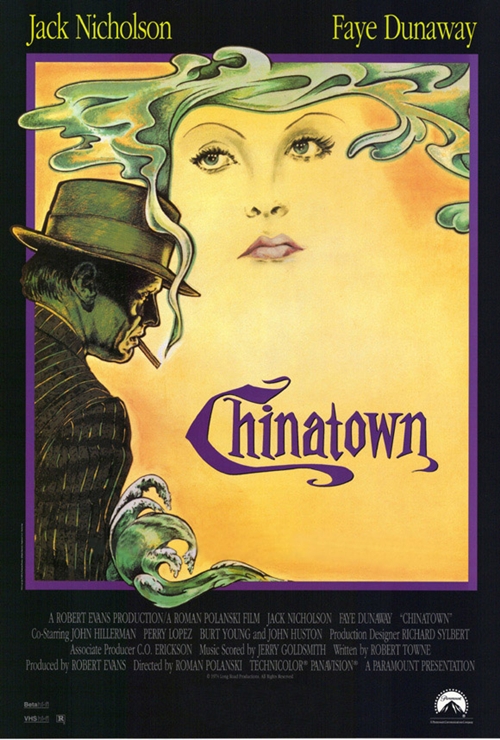 The Natural History Museum in downtown Los Angeles will mark the 100th anniversary of the Los Angeles Aqueduct by hosting a screening of the neo-noir masterpiece “Chinatown,” directed by Roman Polanski and written by Robert Towne. Doors open at 6 p.m. Friday, Sept. 27; the screening starts at 7 p.m.

David Ulin, book critic of the Los Angeles Times, will moderate a brief panel discussion with history professor William Deverell, cultural commentator Sandra Tsing Loh and Christine Mulholland. They will discuss the facts and fiction in Polanski and Towne’s iconic look at greed, power, lust and the rise of modern Los Angeles. This event is free, but space is limited. RSVP HERE. Use the Exposition entrance. You can bring a picnic or buy dinner from on-site food trucks.

We love this film so much we reviewed it twice: FNB’s review and Mark Harrington’s review. 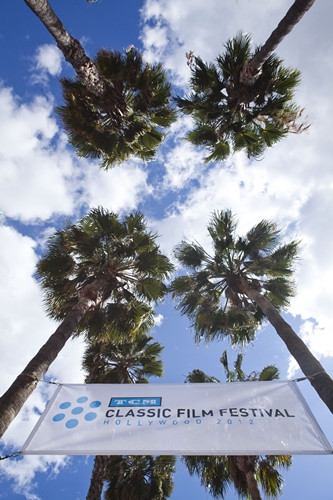 From Thursday night’s world premiere of the newly restored “Cabaret” to the closing-night screening of “Annie Hall” on Sunday, the TCM Classic Film Festival in Hollywood was packed with stars, fans, media and movie experts. “Cabaret,” which celebrates its 40th anniversary this year, opened the fest. The red-carpet event at Grauman’s Chinese Theatre drew stars Liza Minnelli, Joel Grey and Michael York.

And fittingly, since the fest’s theme was style, there were film noir screenings as well as events devoted to both noir and fashion. The Film Noir Foundation’s Eddie Muller programmed the classic noir offerings, Shannon Clute and Richard Edwards of noircast.net led a panel discussion and author Foster Hirsch was on hand to interview Walter Mirisch, whose first foray into producing was 1947’s “Fall Guy” by director Reginald Le Borg.

I’m still recovering from so much delightful viewing, but here are a few photo highlights, courtesy of the fest.

“Chinatown” will screen at 9:30 p.m. Friday, April 13, at the TCM Classic Film Festival. Writer Robert Towne and producer Robert Evans will be at the event. This is the site’s second review of the movie; you can read FNB’s piece here.

Those are the last words, chilling, evocative, cynical, of Roman Polanski and Robert Towne’s Chinatown – that great dark tale of politics, murder and family secrets in ’30s Los Angeles. No matter what you think of Polanski and his arrest and extradition problems, the director’s 1974 private-eye classic “Chinatown” is still a masterpiece of neo-noir. The movie, one of the big commercial-critical hits of its era, was a career peak for director Polanski, the matchless screenwriter Towne and the superb star team of Jack Nicholson, Faye Dunaway and John Huston.

It’s a picture that seems close to perfect of its kind and one of the ’70s films I love best. Gorgeous and terrifying and sometimes funny as hell, “Chinatown” tells a romantic/tragic/murder mystery tale of official crimes and personal depravity raging around the real-life Los Angeles water scandal, with private sin and public swindles steadily stripped bare by J. J. Gittes (one of Nicholson’s signature roles), a cynical, natty, smart-ass shamus, with a nose for corruption and a hot-trigger temper.

Gittes is an anti-Philip Marlowe detective. He’s proud of taking divorce cases (Marlowe disdained them), and he’s not too queasy about selling out. He’s also much less sexually reticent than Raymond Chandler’s knight of the mean streets, though he cracks just as wise. Fundamentally, Gittes is a survivor.

He likes his nose, he likes breathing through it. But he finds it increasingly hard to keep it unbloodied and out of rich L. A. people’s business as he keeps digging deeper into what starts as a simple infidelity investigation and then broadens to include a vast conspiracy, intertwined with the deadly history of immaculately evil nabob Noah Cross (played by the devilishly genial Huston) and his desperate, wounded daughter Evelyn Mulwray (Dunaway). It’s a nasty web that includes Polanski himself as the cocky little fedora-topped thug (with a Polish accent) who calls Gittes “Kitty-Kat” and slices up his proboscis for a memento mori.

“Chinatown”– with splendid Richard Sylbert production design, gleaming John Alonso cinematography and a haunting Jerry Goldsmith score – wafts us back to LA’s downtown and Silverlake in the ’30s: the era of the Depression. It was also the heyday, of course, of the hard-boiled, high-style thrillers of Dashiell Hammett and Chandler, fiction that Towne, at his absolute best, pastiches to a fine turn and that Polanski, at his best makes shatteringly alive.

The movie has great dialogue, great acting, great direction and an unmatchable blend of wised-up savvy and yearning romanticism. The bleak ending (Polanski’s idea) cuts you to the heart. Temper-tantrum virtuoso Nicholson has some of his best blowups.

In fact, this is a movie that – not counting Gittes’ slit nose – has no perceptible flaws: a classic you can’t and won’t forget. “Chinatown” reminds you of how Nicholson almost single-handedly, shifted the ground of the movies, and changed our conception of what a movie star was. It reminds you of how vulnerable Dunaway could be, of what a sly old movie fox Huston was.

It reminds you how great films can be when they have really wonderful, beautifully crafted, verbally agile scripts (like Towne’s here). And it reminds you that Polanski is a filmmaker who’s maybe faced such terror, darkness and despair in his own life – from the Holocaust to personal tragedy – that he can, brilliantly and memorably, turn fear into art.

Though alluring, glamorous and dressed to a T, Evelyn Cross Mulwray is not a femme fatale. As Towne says in the interview, Evelyn sets up the expectation of being a black widow, but she is the heroine of the movie, the one person in the film who is operating out of decent and selfless motives. END_OF_DOCUMENT_TOKEN_TO_BE_REPLACED 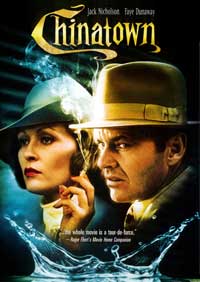