My upcoming trip to Paris (I leave tomorrow) triggered the memory of that great scene in “Pulp Fiction” where two hit men chat about a quarter-pounder with cheese (Royale with cheese) in Paris so I decided to run this review in honor of my trip. For the next two weeks, my posts will slow down a bit as I spend time with a lovely friend and soak in the atmosphere of this ravishingly beautiful city.

Several years ago, at the Cannes Film Fest, I saw Quentin Tarantino rushing down the Croisette but I froze and didn’t approach him to say how much I liked his work. (He was helming the jury that year.) As I stood there, regretting that I’d missed the chance, two English guys walked up and asked me if I was lost. I filled them in; they said I was quite right to have refrained.

But then two Italian men joined us and told me I was crazy not to have said hello. “Maybe he’ll show up at the Ritz,” one of them said, gesturing toward the hotel. “Why don’t we have a glass of champagne there and see if perhaps he arrives?”

As tempting as that sounded, I’d already agreed to meet people at the cheap and cheerful Le Petite Carlton, where the casual, sometimes-raucous crowd spreads out into the street, people bum Marlboros and Gitanes, beer is served in tacky plastic cups and a little kitchen churns out thin-crust pizza well into the early morning hours. Another missed opportunity! 😉

So if by some odd chance, on this trip, I happen to see Tarantino on the Champs Elysee or some charming Italian men invite me to cocktails at the Ritz, I’ll know what to do!

“Pulp Fiction” is a neo noir of audacious originality, comic brilliance and exquisite craftsmanship. It was one of the most important films of the 1990s. Like his previous film, 1992’s “Reservoir Dogs,” it’s a crime movie that deals with bad guys doing bad stuff – in “Dogs” it’s a robbery gone wrong. In “Pulp Fiction” we’re immersed in three separate but interwoven stories about two chatty hit men, a corrupt boxer who defies a mob boss, and a grunge version of Bonnie and Clyde.

Tarantino tells us the stories out of order, bookended by the scruffy lover bandits (Tim Roth as Pumpkin and Amanda Plummer as Honey Bunny) who hold up an LA coffee shop. Bruce Willis plays Butch the boxer who pulls a double-cross. John Travolta made a stunning comeback as sexy smart-ass Vincent Vega and Samuel L. Jackson dazzles as Jules Winnfield, an armchair philosopher packing heat.

As Vincent and Jules discuss fast food, foot massages and Fate, Vincent is assigned an extra job from brawny bossman Marsellus Wallace (Ving Rhames): to take Mrs. Wallace (Uma Thurman) aka Mia out on the town. A headturner with jet-black hair, Louise Brooks bangs, wide blue eyes and long legs, Mia gets what Mia wants. Topping the list are milkshakes, drugs and dancing. Make that dancing with Travolta, mmm.

There is much to love about this film, particularly the highly original characters and crackling dialogue, which includes one-liners, retro slang, debates over points of logic and lengthy tangents of trivia. The dialogue seems to emerge organically from the characters and random chitchat punctuates major dramatic moments.

Actors talk with their back to the camera and sometimes put the imminent action on hold so they can wind up their conversation. Even though Pumpkin and Honey Bunny probably get the least amount of screen time, through their dialogue, we see several layers of their partnership, both tough and tender. END_OF_DOCUMENT_TOKEN_TO_BE_REPLACED 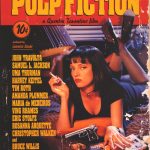 One of the great loves of my life is Quentin Tarantino’s imagination and the bizarre people dwelling there. In “Pulp Fiction,” we meet a pair of hit men with a gift for gab, a boxer who refuses to throw a fight, and two adorable armed robbers named Pumpkin and Honey Bunny. John Travolta, Samuel L. Jackson, Uma Thurman and Bruce Willis star. Tarantino and partner Roger Avary won the Oscar for best original screenplay.