TCM’s Classic Film Festival starts tomorrow and I’m fretting about packing in all the viewing and events. Definite draws are the classic noirs “The Third Man,” which screens at 9 a.m. Saturday; Henry Hathaway’s “Niagara” from 1953, starring Marilyn Monroe, screening at 6:15 p.m. on Saturday; and “Gaslight” (George Cukor, 1944) showing at 9:30 p.m. Saturday. Other must-sees: Marlene Dietrich in “The Devil is a Woman” (Josef von Sternberg, 1935) at 10:15 p.m. Friday and “Citizen Kane” (Orson Welles, 1941) at 3:30 p.m. Saturday.

If a city could be a femme fatale, it might be Vienna in “The Third Man” from 1949. The voiceover at the beginning of the film refers to “old Vienna with its Strauss music, its glamour and easy charm.” But new Vienna, a war-torn metropolis split into four Allied zones after World War Two, is a city living by its wits, host to a thriving black market. Hey, a girl’s gotta make a living somehow.

The voiceover also introduces us to a slightly naïve and completely broke newcomer to the hallowed city: Holly Martins (Joseph Cotten), an American writer of pulpy Western novels, who has come to visit his old friend and fellow Yank Harry Lime (Orson Welles), a sly operator.

Instead of a buddy reunion, though, Martins ends up at his friend’s funeral: Turns out Harry was hit by a car and has died. Also at the burial is the distinguished Major Calloway (Trevor Howard), who suggests they get a drink.

What troubles Martins is learning that there were three men who carried Harry’s body from the street after he died, but he can only find two. Finding the mysterious third man drives the action, ultimately leading to a chilling chase through the dank sewers of underground Vienna.

Director/producer Carol Reed, working from a Graham Greene novel, draws us into a perfectly rendered world where tension and trouble pulse just beneath the surface, where anxiety and disillusion are tempered with fleeting pleasures and faded love. I love the details of everyday Viennese life: a moonfaced boy, an ancient balloon seller, a haggard landlady, a prowling cat and the forlorn-looking Teddy bears of the children’s hospital. The lecture hall scene reminds me of a similar passage in Hitchcock’s “The 39 Steps” from 1935. END_OF_DOCUMENT_TOKEN_TO_BE_REPLACED 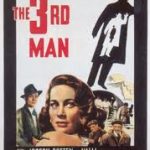 American writer Holly Martins (Joseph Cotten) comes to his visit his school friend Harry Lime (Orson Welles) in Vienna after World War Two. But he discovers that his pal is dead and the city is a hub for black-market corruption. Cotten digs for more details with help from various jaded denizens, including Welles’ girlfriend (Alida Valli) and a British major (Trevor Howard). First-rate fare from director Carol Reed working from a Graham Greene novel; brilliant zither music from Anton Karas.