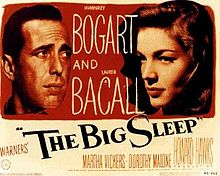 Perhaps the most serpentine plot in all noir, a tour-de-force film, based on a Raymond Chandler novel and directed by Howard Hawks, one of Hollywood’s most celebrated storytellers. The twists and turns are beside the point, which is: the divine writing and double-entendre exchanges between Humphrey Bogart and Lauren Bacall. He’s detective Philip Marlowe; she’s a socialite. She’s also his boss because her family hired him to snuff out a blackmail scheme involving her naughty little sister. So far, so good, until bodies start getting snuffed out too. Jolly good fun and wildly sexy!