His nickname was “Otto the Ogre.” He was one of the most colorful and feisty of all the star Golden Age Hollywood directors. His verbal abuse of actors, including beautiful actresses and children, was legendary.

But Otto Preminger – known for his hot temper, thick German accent, bald bullet head, defiance of taboos and long camera takes – was also one of the czars of film noir in the 1940s and early ’50s, when he directed classics like “Laura,” “Where the Sidewalk Ends” and “Angel Face.” Later on, he made one of the best of all trial dramas, 1959’s “Anatomy of a Murder,” and directed the neglected 1965 British thriller “Bunny Lake is Missing.”

Read the rest of the story here. 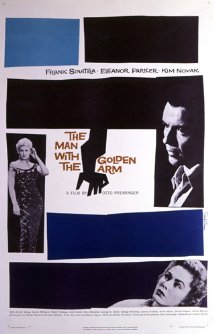 12:45 p.m.: (9:45 a.m.): “The Man with the Golden Arm” (1955) As a man struggling to give up his heroin habit, Frank Sinatra leads a superb cast in this riveting adaptation of Nelson Algren’s novel. Kim Novak plays his ex-girlfriend. Sinatra earned a Best Actor Oscar nom; the film’s music (by Elmer Bernstein) and art direction-set decoration also were considered for Oscars. With Eleanor Parker and Darren McGavin.

Other non-noir Premingers shown on his birthday are his two well-made stage adaptations: George Bernard Shaw’s historical drama “Saint Joan” (1957), scripted by Greene, with Jean Seberg, Richard Widmark and Anton Walbrook at 10:45 a.m. (7:45 a.m.) and F. Hugh Herbert’s controversial sex comedy “The Moon is Blue” (1953), with William Holden, Maggie McNamara and David Niven, at 3 p.m. (12 p.m.). Both are worth a look.

History of fashion in film noir highlighted Sunday at the Skirball Cultural Center Rare and riveting, ‘The Babadook’ holds its own among horror classics