Luck so bad it borders on absurd, a story as flimsy as cardboard, a femme fatale who’s downright feral. That would be 1945’s “Detour,” a B classic that director Edgar Ulmer shot in less than a month for about $30,000.

Despite these limitations (or maybe because of them) Ulmer manages to work some visual miracles. Those foggy scenes where you can’t see the street? He didn’t have a street so he filled in with mist. Born in what is now the Czech Republic, Ulmer came to the US in 1923. He brought a high-art, painterly disposition to this tawdry little flick, as he did to most of his work.

You can read the full FNB review here.

All this month, on its Friday Night Spotlight screenings, TCM will show a series of classic film noirs – with each Friday devoted to movies based on or written by (or both) one of four top-notch noir authors – Dashiell Hammett, Raymond Chandler, James M. Cain and Cornell Woolrich.

Tonight the spotlight is on the matchless hard-boiled crime writer Dashiell Hammett – who, along with Ernest Hemingway, was probably one of the most influential American writers of the decades after World War I, and since. Terse, lean and brutally direct, empty of flourish, cliché or artifice, Hammett’s style owed a lot to his own years as a Pinkerton detective.

He decisively reveals a world of greed, murder, illicit sex, gangsterism, corruption and treachery among the rich and the crooked, telling it all with a flair and a punch that was copied endlessly but rarely recaptured. (The “Noir Writers” films were curated and will be introduced by film noir expert Eddie Muller.)

8 p.m. (5 p.m.): “The Maltese Falcon” (1931, Roy Del Ruth). The first movie adaptation of Hammett’s classic dark private-eye novel, with Ricardo Cortez as Sam Spade, Bebe Daniels as the femme fatale and Dudley Digges as Gutman – all chasing the priceless black bird. It pales beside John Huston’s great version of course (see below). But it’s not bad, in a raunchy pre-Code way.

9:30 p.m. (6:30 p.m.): “City Streets” (1931, Rouben Mamoulian). Hammett’s only original movie story: an underworld romance stylishly directed by Mamoulian, who was in his most innovative period. With Gary Cooper and Sylvia Sidney as lovers caught in a vicious world of big-city crime, and Paul Lukas and Guy Kibbee as off-type bad guys.

11 p.m. (8 p.m.): “After the Thin Man” (1936, W. S. Van Dyke). The first of many sequels to the smash hit 1934 movie of Hammett’s last novel “The Thin Man,” with William Powell and Myrna Loy as the peerlessly witty and stylishly sloshed Nick and Nora Charles. (Hammett modeled the sharp-witted, hard-drinking sleuth and his charming helpmate after himself and his playwright/lover Lillian Hellman). Here, they visit Nora’s San Francisco cousin and investigate a string of murders among her rich elite family. With Elissa Landi, Joseph Calleia, Asta (the Charles’ peppy wirehaired fox terrier), and Jimmy Stewart in one of his most atypical roles. 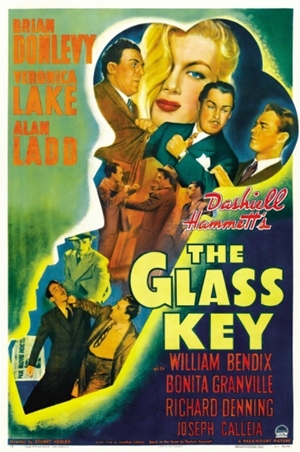 4:30 a.m. (1:30 a.m.): “Satan Met a Lady” (1936, William Dieterle). The second movie “Maltese Falcon” adaptation: a travesty that tries to change the story into a loony sex farce, alters all the names (Sam Spade becomes “Ted Shane”), turns Gutman the Fat Man (played for Huston by Greenstreet) into a Fat Woman (played by comedienne Alison Skipworth), and turns the Maltese falcon itself into a missing ram’s horn. Ridiculous beyond description, despite the presence of Bette Davis as the villainess. The movie also boasts Warren William (as Ted Shane) and Arthur Treacher.

5:30 p.m. (2:30 p.m.): “The Hitch-Hiker” (1953, Ida Lupino). Director Lupino was at the top of her craft with this taut little B-movie noir, about a couple of hunting buddies (Edmond O’Brien and Frank Lovejoy), who pick up the wrong hitch-hiker (William Talman) and find themselves hijacked and facing death.