A guide to classic film noir and neo-noir on cable TV. All the movies are from the current schedule of Turner Classic Movies (TCM), which broadcasts them uncut and uninterrupted. The times are Eastern Standard and (Pacific Standard).

The two great American anti-lynching movies are Fritz Lang’s 1936 classic “Fury,” and William Wellman’s great 1943 Western “The Ox-Bow Incident.” “Fury” is the more powerful of the two, the more effective, the more memorable. Lang’s film, which he also co-wrote, is an explosive saga of a Depression-era small city descending into lynch hysteria. Spencer Tracy, at his youthful naturalistic best, is Joe Wilson, a decent, ordinary, working-class guy who stops his car in the town and is mistaken for a kidnapper. Locked in jail despite his desperate protestations of innocence, Joe is then subject to a terrifying nocturnal assault by the maddened townspeople, who drive away the craven police guards and burn the jail down, killing Joe – they think.

But Joe is alive, having fled back to the big city and his family and fiancée (Sylvia Sidney). And he is now consumed with obsessive dreams of fiery revenge and awful retribution. What happens in the course of that revenge may be unlikely, but “Fury” is still gripping, frightening and hypnotic. It’s one of the most Germanic of Lang’s American movies, one of the strongest social message dramas of the ’30s, and as obvious a precursor of ’40s film noir as Lang’s1931 masterpiece “M.” With Walter Brennan, Bruce Cabot, Walter Abel and Frank Albertson. Screenplay by Lang and Bartlett Cormack, from a story by Norman Krasna.

6 a.m. (3 a.m.): “Party Girl” (1958, Nicholas Ray). In Nick Ray’s lusciously colorful and nervy gangland tale, Robert Taylor is a handsome mob attorney who milks sympathy from juries by walking on his crutches. Cyd Charisse is the leggy nightclub dancer/party girl he loves and Lee J. Cobb is Cyd’s other lover: Rico, the Chicago mob boss who carries a little vile of acid for anyone who double-crosses him. Set in 1930s Chicago, this is pure Ray: romantic, moody and violent. With John Ireland and Kent Smith. 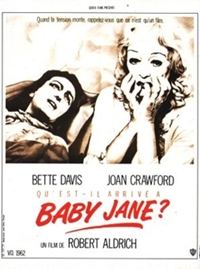 (Robert Aldrich Night begins at 8 p.m. (5 p.m.) with a great adventure movie: Jimmy Stewart, Richard Attenborough and Peter Finch in 1965’s “The Flight of the Phoenix.”)