Stanley Kubrick’s ‘The Shining,’ noir as they come, plays Saturday at the Aero Theatre in Santa Monica 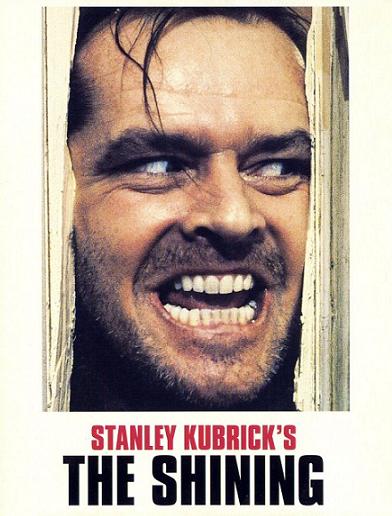 “Heeeere’s JOHNNNY!!!!” screams the ferociously demented-looking hotel caretaker Jack Torrance as he axes open a door to get at his terrified wife Wendy and their child Danny, in the frightening final scenes of “The Shining“ – Stanley Kubrick’s flawed yet unforgettable 1980 film of what may be Stephen King’s best novel.

“The Shining” is revived on Saturday, Nov. 22, at the American Cinematheque’s Aero Theatre.

In the movie, Jack (played to the hilt by Jack Nicholson) is snowbound with his family (played by Shelley Duvall and Danny Lloyd) in the mountainous and isolated Overlook Lodge. It’s a vast spooky place, decorated with somber Native American motifs and infested with a creepy set of ghosts, including a sardonic bartender and a lecherous nude old lady and the previous caretaker who murdered his own family long ago in these same eerie corridors and rooms.

Wendy and Danny have watched Jack going crazier and crazier. Now, Mad Jack has hit his frenzied peak  and there‘s no one at Overlook to stop his axe-swinging rampage.

“The Shining” is not only based on King‘s best novel; it‘s probably the best movie ever adapted from any of King’s books. Even so, it’s flawed, and King was right to be somewhat disappointed with it. Here’s the problem: Kubrick and his fellow screenwriter, novelist Diane Johnson (“Le Divorce”) wrote Jack as crazy as a loon the moment he stepped into the Overlook (and even before).

King, more movingly, wrote his main character as a sympathetic but haunted alcoholic and failed novelist who loved his family and gradually sank into madness, fighting, as the ghosts and demons took over. In retrospect, Kubrick probably should have hired King as his co-writer rather than Johnson. The original story would have made a better movie and an even better role for Nicholson.

That said, “The Shining” is still one hell of a show, noir as they come, and one of the most horrifyingly visual of all classic American horror movies.

The Aero Theatre is at 1328 Montana Ave. in Santa Monica.